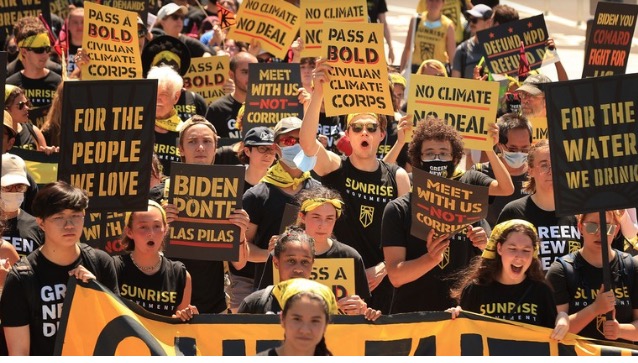 More frequent and powerful heat waves, wildfires, floods, and hurricanes are costing billions of dollars while driving unprecedented human migration that fuels conflict. Despite the enormity of the problem, there is still good news to report. As governments prepare for the upcoming United Nations global climate summit to be held in Egypt in mid-November, developments in the fight against catastrophic climate change suggest that, against all odds, hope is not lost.

In the United States, the world’s greatest historical emitter of greenhouse gasses, the Senate passed what has been called the most significant climate legislation in U.S. history. The bill passed by reconciliation, requiring only 50 votes rather than the usual 60. The vote was 51 to 50, with Vice President Kamala Harris casting the tie-breaker.

After the House passes the bill and it’s signed into law by President Biden, roughly $370 billion will fund a broad array of programs intended to cut U.S carbon emissions by 40% by the year 2030, over 2005 levels. Tax credits and other incentives to buy and install renewable energy equipment like solar panels and wind turbines, and to invest in clean energy manufacturing make up a bulk of the funding. Up to $60 billion in environmental justice funding is for incentives to bring wind, solar and other renewable technologies into poor, marginalized communities long shut out of green investments.

The bill, however, includes significant trade-offs, including major handouts to the fossil fuel industry, primarily to win the needed support of conservative Democratic West Virginia Senator Joe Manchin. Manchin has made a personal fortune worth millions from his family coal business. He is the largest recipient of fossil fuel industry donations in Congress. Among the concessions Manchin won was a side agreement to expedite fossil fuel permitting, including for the controversial Mountain Valley Pipeline. If built, the MVP will carry two billion cubic feet of fracked gas across more than 1,000 streams and wetlands in Appalachia, including parts of West Virginia.

“It’s doubling down on fossil fuels to get to renewables,” Tara Houska Indigenous lawyer and founder of Giniw Collective, said on the Democracy Now! news hour. “In order to get access to renewable energy dollars and investments, upfront, the fossil fuel industry is handed millions and millions of acres of public lands, waters, side project deals where you see the rolling back of bedrock environmental law, all of this just to get investment into renewable energy. That is not a climate solution. Mother Nature does not deal in U.S. dollars.”

Brett Hartl, government affairs director at the Center for Biological Diversity, called the bill “a climate suicide pact.” Robert Weismann, President of Public Citizen, said on Democracy Now!, commenting on the 40% reduction in emissions the bill is expected to deliver, “That’s not nearly enough, but it’s consequential. And it’s consequential as opposed to the choice of doing nothing, which was unfortunately our alternative.”

Meanwhile in Colombia, the first leftist president and vice president in that nation’s history were inaugurated on Sunday. President Gustavo Petro is a former guerrilla who later became Mayor of Bogotá and a senator. Vice President Francia Marquez is Colombia’s first Afro-Colombian and first female vice president. The former housekeeper is a renowned social movement leader who was recognized with the prestigious Goldman Environmental Prize in 2018 for her work helping the women of La Toma in Colombia’s Cauca region organize to stop illegal gold mining.

A major element of their administration’s platform is to accelerate the shift to renewable energy, away from Colombia’s heavy reliance on oil and coal extraction.

When another former Bogotá mayor, Enrique Peñalosa, argued on Twitter that Petro’s proposed ban on fracking “simply means that oil dollars will be left underground, that young Colombians will have fewer opportunities, that there will be fewer public works,” Petro fired back, “Brother, the problem is not how many dollars remain underground if fracking is banned, but how many lives are lost above ground, if it isn’t.”

Real change is driven by powerful, grassroots movements. Colombia’s new leaders know this. In the United States, the role of movements is often lost in a government awash in dark money with armies of lobbyists to spread it around.

The achievements of the Inflation Reduction Act, Public Citizen’s Rob Weismann notes, “wouldn’t have happened absent movements across the country and the Bernie Sanders [presidential] campaign, which forced them on the agenda and forced them through Congress.”

Varshini Prakash, the founder of the Sunrise Movement, issued a call to action: “This isn’t the bill my generation deserves but it is the one we can get. It must pass to give us a fighting chance at a livable world…Youth leaders to Congress: Pass this bill, then get back to work.”

(This article was featured in Common Dreams.)

(Denis Moynihan has worked with Democracy Now! since 2000. He is a bestselling author and a syndicated columnist with King Features. He lives in Colorado, where he founded community radio station KFFR 88.3 FM in the town of Winter Park.)

Abortion Is a Matter of ‘Freedom' for Biden and Democrats

What Documents Can a President Declassify and How Does It Work?