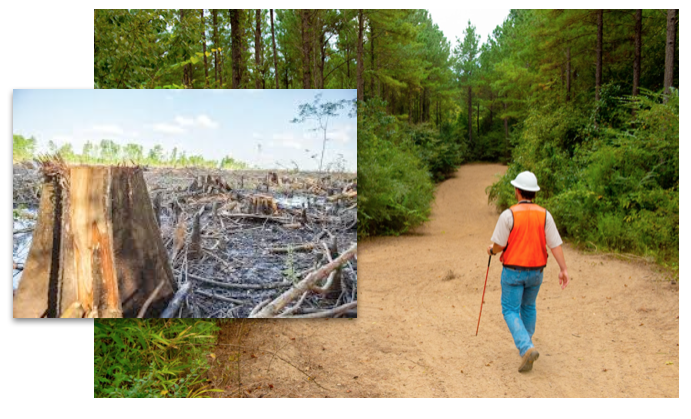 CLIMATE WATCH - The wood-pellet industry has full-scale operations smack dab in the heart of British Columbia’s Inland Temperate Rainforest, the last rainforest of its kind in the North.

The fabled rainforest contains cedars of up to 12-15 feet in diameter and up to 2,000 years old. Its extraordinarily rich ecosystem is home to 2,400 plant species and numerous wildlife species.  It is one of only three inland temperate-boreal rainforest in the world. The others are in southern Siberia and Russia’s Far East.

Of significant concern, according to criteria by the International Union for Conservation of Nature (IUCN) BC’s inland rainforest is endangered, susceptible to ecological collapse within only one decade, assuming current logging rates continue. Remarkably, a study found that 95% of the rainforest’s “core habitat” has been lost since 1970. (Source: Brian J. Barth, Burning Up: The Controversial Biofuel Threatening BC’s Last Inland Rainforests, The Whale, 2022)

However, the wood-pellet industry says, “not to worry.” Pacific BioEnergy, the major wood-pellet manufacturer in the rainforest claims the wood-pellets are made from low-grade timber. Accordingly, they claim to make pellets that are, “sustainable by-product of forests already being cut by using lumber waste such as sawdust and slash.” meaning larger debris left by loggers.

But, according to the independent NGO Sustainable Biomass Program, the use of whole logs has ballooned from 6% in 2019 to 50% in 2020. That is not slash or sawdust as represented by the company.

Moreover, satellite imagery by the Living Atlas of the World “confirmed a shift to whole trees.”

A 2021 Google Image shows log piles around the wood-pellet plant that’s equivalent to four soccer fields, which is an eye-opening 6xs the area of wood residuals on the property.

According to IUCN, ‘despite evidence to the contrary,’ the pellets are marketed as ‘clean, renewable energy’ by Pacific Bioenergy located near Prince George, BC and by bioenergy facilities in Europe.” (Source: Primary Forest Case Study - British Columbia’s Forgotten Inland Temperate Rainforest, IUCN)

Then, what purpose does woody biomass serve… other than as a profit source for private industry and serving as a faux alternative green energy source for electricity plants in Europe?

Wood-pellet manufacturing, a multi-billion dollar global industry, is expected to double again in the next five years. “European power plants have been among the biggest consumers—pellet-fired power plants are uncommon in North America—but demand from Japan and South Korea has also increased in recent years.” (The Whale)

Canada is knee-deep in the woody biomass industry. According to the Wood Pellet Association of Canada, BC’s forests produce more pellets than anywhere else in the world.

But, how is it possible with a straight face for anybody to claim burning trees is a substitute for fossil fuels? Wood-pellets emit carbon the same as coal. And, it’s pure poppycock to claim that new trees are planted to replace the cut downs to sequester the carbon released when the pellets burn. The science does not support that flimsy argument; it’s not even close!

“A forest of saplings may take a century or more to mature into an ecosystem that holds as much carbon as the one it replaced. An open letter from 500-plus scientists and economists sent last year to world leaders warned that burning pellets ‘is likely to add two to three times as much carbon to the air as using fossil fuels.’ Nearly 800 scientists and academics, including two Nobel laureates and three winners of the US National Medal of Science, signed a similar letter in 2018 (The Whale).

The whole thing boils down to the obvious fact that burning things emits carbon quickly and regrowing things to sequester carbon takes a long time, according to Mary Booth, director of the Partnership for Policy Integrity, a US-based environmental nonprofit critical of the pellet industry: In other words, climate change will have wreaked havoc long before those young trees mature into an ecosystem that holds as much carbon as the one they replaced (The Whale).

The UN and several nations classify woody biomass as “carbon neutral”. Yet, it is not carbon neutral, which isn’t even a scientific term. It is a carbon emitter, plain and simple!

“The wood pellet industry is a monster out of control… Burning wood puts out more carbon dioxide per unit of electricity produced then coal does.” (Bill Moomaw, emeritus professor Tufts University and co-author of several IPCC reports – 2019 Mongabay interview).

A letter from 500 scientists and economists: “Overall, for each kilowatt hour of heat or electricity produced, [burning] wood initially is likely to add two to three times as much carbon to the air as using fossil fuels,’ refuting the policy and industry claims of biomass zero emissions.” (Source: 500+ Experts Call on World’s Nations to Not Burn Forest to Make Energy, Mongabay, February 16, 2021)

“Because the combustion and processing efficiencies for wood are less than coal, the immediate impact of substituting wood for coal is an increase in atmospheric CO2 relative to coal. This means that every megawatt-hour of electricity generated from wood produces more CO2 than if the power station had remained coal-fired.” (John Sherman, Complex Systems Analyst, MIT)

An article entitled “The ‘Green Energy’ That Might Be Ruining the Planet” appeared in Politico in March 2021: “Here’s a multibillion-dollar question that could help determine the fate of the global climate: If a tree falls in a forest—and then it’s driven to a mill, where it’s chopped and chipped and compressed into wood pellets, which are then driven to a port and shipped across the ocean to be burned for electricity in European power plants—does it warm the planet? Most scientists and environmentalists say yes.”

Yet, as the article suggests, governments around the world, as well as the UN, have embraced “biomass power” as a legitimate zero-emissions renewable energy. Europe now generates more energy from burning wood that from wind and solar combined, even though solar produces 100 times as much power per acre as biomass.

Biomass power is now a $50B global industry and growing fast, as it is now spreading to Asian countries. Policy-makers throughout the world believe they’ve discovered an answer to meeting carbon mitigation goals. Eureka! Burn wood!

But, what if woody biomass, like fossil fuels, causes global warming?

Academics and scientists say, yes, it does. Woody biomass blends with fossil fuels as a radical enhancement of global warming emissions.

It’ll put global warming on a rip-snorting bender. Buckle up!

Here Are 6 Takeaways From Biden's State of the Union Address

State of the Union: Some Republicans Boo Biden Comments on Medicare and Social Security