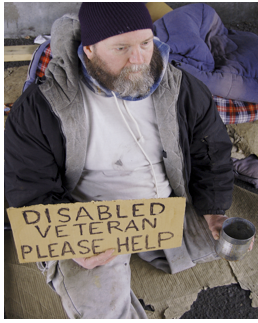 HOMELESS POLITICS-The hard-line Republican right, and the ineffective Democratic opposition to it, are having a devastating impact on the homeless, pushing more Americans into that miserable state that hits children especially hard.

The bland words used by politicians and journalists covering the Washington fiscal debate don’t reflect the dimensions of the tragedy. They speak in jargon such as “continuing resolution” or “sequester,” which is a muddy way of saying automatic spending cuts.

Sequester has a Dickensian sound, reminding me of the workhouses and debtors prisons of Victorian England. Sequester is a legal term—a court takes possession of assets until a debt has been paid.

Picture a court grabbing the furniture of a poor family and sequestering it until debts are settled.

Except in this case, the courts are Congress. The furniture corresponds to billions in stalemated federal funds, sequestered until elected representatives reach an agreement, an event as unlikely as the impoverished Victorian family paying off its debts.

The toll of congressional inaction has been laid out in a series of stories on the Center on Budget and Policy Priorities’ Off the Charts website, an invaluable guide to the impact of what’s happening.

“Six years after the Great Recession began, the number of homeless families with children remains stubbornly high,” wrote Barbara Sard, the center’s vice president for housing policy. “And the number of low-income households with unmet needs for housing assistance—especially families with children—has soared. Funding cuts under sequestration threaten to halt progress against homelessness and worsen the shortage of affordable housing.”

The hardship of families and children is an overlooked national disgrace. The rare news coverage of homelessness focuses on older people wandering the streets, often alone, many suffering from mental illness and/or substance abuse.

But families live in the shadows. Most move from shelter to temporary housing to cars, often taking children with them, trying to maintain the fiction of a normal life. There were more than 1.1 million homeless children and youth in 2012, the center said. Other estimates are higher. It’s hard to get an accurate count of youngsters always on the move. Four-fifths of the children have been dropped off by parents at relatives, friends and others willing to take them in, at least temporarily. The rest live in homeless shelters, on the street, in cars or abandoned buildings.

The National Center on Family Homelessness has chronicled the toll such conditions take on children.

Their ailments reflect the hard lives of kids whose parents or other family members can’t afford medical care. For them, there are no appointments for pediatricians or other physicians or nurse practitioners to provide preventive care or advice to parents. These kids get a trip to the emergency ward when the symptoms become acute.

The list of ailments reflects that lack of preventive care. Children experiencing homelessness are sick four times more often than other children. Four times as many homeless children suffer from respiratory infections as do other kids. Twice as many have ear infections and fivefold suffer from gastrointestinal problems.

Among the funds now being held up and facing big cuts—sequestered—are allocations for vouchers the federal government gives to more than 2.1 million low income people to help them pay their rent. These reductions would undoubtedly increase homelessness.

By the end of this year, the Center on Budget and Policy Priorities’ Sard estimates, as many as 65,000 low income families will be denied vouchers, perhaps expanding to 185,000 families by the end of 2014. Many homeless families will lose the aid that could put them into apartments and rental homes, as will those barely getting by and facing the prospect of life without a home.

“This unprecedented reduction in federal rental assistance primarily affects low-income seniors, people with disabilities, and working families with children who are currently on waiting lists for assistance,” Sard noted. “The voucher cuts also mean that many fewer families that are homeless or at imminent risk of homelessness will have access to vouchers.”

On top of this are the reductions in federal food aid to the poor, once called food stamps and now the Supplemental Nutrition Assistance Program, or SNAP. Four out of five of these recipients have gross incomes below the poverty line, about $23,500 for a family of four. As many as 4 million more would be dropped from the program under cuts proposed by House Republicans.

Homeless children, or those threatened with homelessness, are among the most heart rending victims of this assault by Republicans on housing and nutrition for the poor. They go hand in hand. Homeless children suffer much more from obesity and other diet-related ailments than other children.

They also are afflicted more often by mental distress, a condition aggravated by fear over where their next meal is coming from.

And the harm done to this generation and the next will last for years. Their poverty and unsettled circumstances could deny them the education needed for good jobs, and their childhood ill health may set them back for the rest of their lives.

That is the tragedy behind sequester and the rest of the incomprehensible words coming from the gang of Washington journalists and politicians.

(Bill Boyarsky is a journalist and blogs at truthdig.com where this column first appeared. Visit truthdig.org for other prominent writers like Robert Scheer, Amy Goodman and Chris Hedges.) –cw