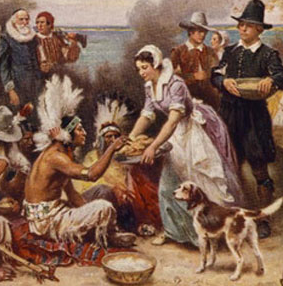 On an autumn night in 1607, a furtive group of men, women and children set off in a relay of small boats from the English village of Scrooby, in pursuit of the immigrant's oldest dream, a fresh start in another country. These refugees, who would number no more than 50 or 60, we know today as Pilgrims. In their day, they were called Separatists. Whatever the label, they must have felt a mixture of fear and hope as they approached the dimly lit creek, near the Lincolnshire port of Boston, where they would steal aboard a ship, turn their backs on a tumultuous period of the Reformation in England and head across the North Sea to the Netherlands.

There, at least, they would have a chance to build new lives, to worship as they chose and to avoid the fate of fellow Separatists like John Penry, Henry Barrow and John Greenwood, who had been hanged for their religious beliefs in 1593. Like the band of travelers fleeing that night, religious nonconformists were seen as a threat to the Church of England and its supreme ruler, King James I. James' cousin, Queen Elizabeth I (1533-1603), had made concerted efforts to reform the church after Henry VIII's break with the Roman Catholic faith in the 1530s. But as the 17th century got under way at the end of her long reign, many still believed that the new church had done too little to distinguish itself from the old one in Rome.

In the view of these reformers, the Church of England needed to simplify its rituals, which still closely resembled Catholic practices, reduce the influence of the clerical hierarchy and bring the church's doctrines into closer alignment with New Testament principles. There was also a problem, some of them felt, with having the king as the head of both church and state, an unhealthy concentration of temporal and ecclesiastical power.

These Church of England reformers came to be known as Puritans, for their insistence on further purification of established doctrine and ceremony. More radical were the Separatists, those who split off from the mother church to form independent congregations, from whose ranks would come the Baptists, Presbyterians, Congregationalists and other Protestant denominations. The first wave of Separatist pioneers—that little band of believers sneaking away from England in 1607—would eventually be known as Pilgrims. The label, which came into use in the late 18th century, appears in William Bradford's Of Plymouth Plantation.

They were led by a group of radical pastors who, challenging the authority of the Church of England, established a network of secret religious congregations in the countryside around Scrooby. Two of their members, William Brewster and William Bradford, would go on to exert a profound influence on American history as leaders of the colony at Plymouth, Massachusetts, the first permanent European settlement in New England and the first to embrace rule by majority vote.

For the moment, though, they were fugitives, inner exiles in a country that did not want their brand of Protestantism. If caught, they faced harassment, heavy fines and imprisonment.

Beyond a few tantalizing details about the leaders Brewster and Bradford, we know very little about these English men and women who formed the vanguard of the Pilgrim's arrival in the New World—not even what they looked like. Only one, Edward Winslow, who became the third governor of Plymouth Colony in 1633, ever sat for his portrait, in 1651. We do know that they did not dress in black and white and wear stovepipe hats as the Puritans did. They dressed in earth tones—the green, brown and russet corduroy typical of the English countryside. And, while they were certainly religious, they could also be spiteful, vindictive and petty—as well as honest, upright and courageous, all part of the DNA they would bequeath to their adopted homeland.

To find out more about these pioneering Englishmen, I set off from my home in Herefordshire and headed north to Scrooby, now a nondescript hamlet set in a bucolic landscape of red brick farmhouses and gently sloping fields. The roadsides were choked with daffodils. Tractors chugged through rich fields with their wagons full of seed potatoes. Unlike later waves of immigrants to the United States, the Pilgrims came from a prosperous country, not as refugees escaping rural poverty.