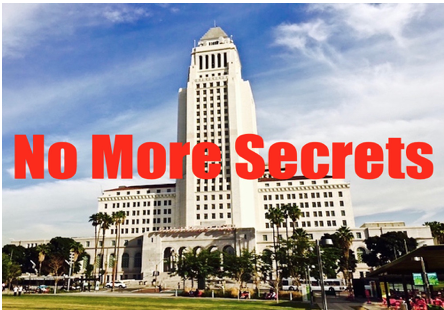 LA WATCHDOG-The Neighborhood Council Budget Advocates, elected by the Budget Representatives from the 97 charter-authorized Neighborhood Councils, believe that the Mayor and the City Council have failed to address the long term financial issues facing our City. At the same time, the City is resorting to financial gimmickry to eliminate next year’s projected $270 million budget gap.

That is why the Budget Advocates have once again issued its Early White Paper. It contains recommendations to address the City’s Structural Deficit, where expenditures such as salaries, benefits, and pension contributions increase at a faster rate than tax revenues, resulting in ongoing budget deficits.

To balance the budget, cash is diverted from other vital services, such as the repair our streets and the hiring of more police, resulting in a Service Insolvency.

The following is the Budget Advocates’ Early White Paper recommendations that have been sent to Mayor Garcetti and his budget team, all members of the City Council, the Controller, the City Attorney, and numerous City officials.

The Neighborhood Council Budget Advocates are concerned that the Mayor’s Budget Policy and Goals for the Fiscal Year 2018-19 directive does not provide details on closing the projected budget gap of $270 million. This gap includes increased pension contributions and new labor contracts. While the City is anticipating new sources of revenue, there are no details on the allocation of these funds.

We are also concerned about the somewhat misleading statements in the Mayor’s directive about the City’s financial health and the status of the Reserve Fund, the proposal to maximize the use of special funds to provide services instead of disclosing their true costs, and the call for no increases in departmental budgets, no matter how important or critical these may be.

The Mayor’s Budget and Policy Goals do not address the City’s long term financial health. There are no solutions for the City’s Structural Deficit; the repair and maintenance of the City’s infrastructure, including its streets, parks, and urban forest; and the seriously underfunded pension plans.

The Budget Advocates have the following recommendations:

a)  Do not enter into any new labor contracts that will increase the budget gap.

c)  The Budget Advocates would like the Mayor’s office and City department heads to accept our offer to work with them on reviewing and analyzing the budget and embrace our meaningful participation in committees charged with developing new sources of revenue and recommendations for cost savings.

d)  Develop a ten-year financial plan that addresses the Structural Deficit and the repair of the City’s streets and the rest of its infrastructure.

g)  Outsource 50% of the repair and maintenance of our streets and sidewalks and other one-off or short-term projects and compare results with City staffed crews.

h)  Develop plans to build reserves equal to 10% of revenues as recommended by the City Administrative Officer. Note that the Government Finance Officers Association recommends a reserve equal to two month’s revenue.

i)   Develop and fund a comprehensive emergency preparedness plan for the City and its neighborhoods.

j)   Hire a City Manager or Chief Operating Officer to manage and improve the City’s civilian operations and enhance cooperation and efficiencies between departments.

k)  Develop a plan to finance the expansion of the Convention Center, the improvement of the Civic Center, the revitalization of the Los Angeles River, compliance with the Clean Water Act (stormwater), and the modernization of the City’s Management Information Systems.

l)   As has been reiterated many times since it was first articulated by the LA 2020 Commission, establish an independent Office of Transparency and Accountability to oversee the City’s finances and ensure fiscal responsibility.

The Early White Paper did not address the City’s runaway litigation costs and the transfer of $242 million from the DWP Power System to City Hall. These and other issues will be addressed in subsequent White Paper recommendations.

Will Mayor Garcetti and the members of the City Council implement these common-sense, easy-to-implement recommendations that will result in greater transparency and sound fiscal policies that will help eliminate the Structural Deficit, the Service Insolvency, and the billions in unfunded pension liabilities. Or will Mayor Garcetti and the City Council continue to kick the can down our lunar cratered streets?

(Jack Humphreville writes LA Watchdog for CityWatch. He is the President of the DWP Advocacy Committee and is the Budget and DWP representative for the Greater Wilshire Neighborhood Council. He is a Neighborhood Council Budget Advocate.  He can be reached at:  [email protected].) Edited for City Watch by Linda Abrams.