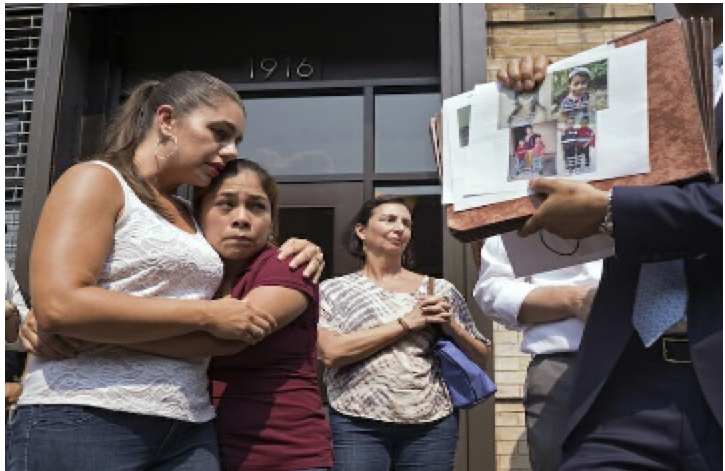 GUEST COMMENTARY--It’s well documented that federal immigration detention centers are a living hell. What’s makes them more dehumanizing is the racism poisoning our country, both inside and outside the detention center walls.

President Donald Trump, Attorney General Jeff Sessions and Republican members of Congress are spreading the poison with inflammatory words appealing to the deep prejudices of the GOP voting base.

Trump has long appealed to racism. He aims his attacks at immigrants, mostly those with darker skin.

He stirs deep fears. He has said undocumented immigrants trying to cross the southern border “could be murderers and thieves and so much else.” The United States, he said, “will not be a migrant camp, and it will not be a refugee holding facility. … We can’t allow that to happen to the United States. Not on my watch.”

The Trump-Sessions border crisis is fiction.

That’s the takeaway from a May 2018 study published in the journal Criminology by scholars Michael T. Light of the University of Wisconsin and Ty Miller of Purdue University titled “Does Undocumented Immigration Increase Violent Crime?”

In reference to public policy, at the most basic level, our study calls into question one of the primary justifications for the immigration enforcement build‐up. Debates about the proper role of undocumented immigrants in U.S. society will no doubt continue, but they should do so in light of the available evidence. For this reason, any set of immigration policies moving forward should be crafted with the empirical understanding that undocumented immigration does not seem to have increased violent crime.

The phoniness of the administration’s claim of a huge wave of immigrants overwhelming the border is shown in the latest reportfrom Syracuse University’s Transactional Records Access Clearinghouse, the respected independent organization that compiles data on immigration.

The organization, known as TRAC, reports that the number of adults apprehended at the border for illegal immigration has actually declined this year by 14.5 percent from 2017. The number of unaccompanied children also is down.

Just about a quarter of the immigrants arrive with children, and several hundred have been sent back to their homelands without their children, which explains the hundreds of tragic family separations that are shaming the country.

Sessions excuses the separations on the grounds that a family member is found to be a criminal and must be imprisoned. That’s not true. TRAC found only one such family member in April. That leaves the federal government no excuse for the cruel practice of separating children from their parents, some of whom they may never see again.

“Sessions and his group of fellow racists know very well that their actions violate the Constitution and the laws of our country governing both conditions for detention and reasons for detention,” retired Immigration Judge Paul Wickham Schmidt wrote in his blog, immigrationcourtside.com. “Yet, they walk free and smugly give press conferences at which they continue to lie about their actions. Their victims, on the other hand, largely languish in substandard prisons or are being removed to the dangerous situations they fled in their home countries without any pretense of Due Process or fundamental fairness.”

Conditions in the detention centers—prisons, actually—are likely to get worse. That’s because Attorney General Sessions has made it difficult, if not impossible, for undocumented immigrants to seek sanctuary from dangerous conditions in their homelands in Central America and other regions.

Sessions issued a policy memorandum this month that forbids immigration officials from granting asylum to immigrants fleeing domestic abuse, death threats from gangs or other fears of violence and crime.

“The mere fact that a country has civil strife or anarchy resulting in displaced persons or that it has problems effectively policing certain crimes, like domestic violence or gang-related activities, or that certain populations are or are more likely to become victims of crimes or violence, cannot, by itself, establish eligibility for asylum or refugee status,” Sessions wrote.

Sessions also raised the possibility of an almost blanket denial of amnesty to those from countries where violence is widespread. These would be societies, he said, “where virtually everyone is at risk of crime—or broad swaths of society are at risk of crime. …” Does this mean the very fact that refugees come from a crime-ridden country makes them ineligible for asylum?

It certainly means there will be an increase of undocumented immigrants put into detention centers while immigration officials sort out their cases.

A report by the nonprofit organization Freedom for Immigrants explores how the Trump rhetoric is making conditions more difficult in the centers, which are already notorious for poor medical care and denial of visiting privileges, including access to lawyers.

After interviewing prisoners in centers around the country, Freedom for Immigrants said:

The president’s vile rhetoric encourages U.S. Immigration and Customs (ICE) officers and immigrant prison guards to respond to immigrants in their custody with the same type of hateful behavior.

Since January 20, 2017, when Donald Trump became the President of the United States, Freedom for Immigrants has documented at least 800 complaints of abuse motivated by hate or bias in 34 immigration detention jails and prisons. These complaints were collected through visits and other forms of direct communication with people in U.S. immigration detention. The affected individuals come from 62 countries speaking 22 languages. The majority of complaints came from men (71.01 percent), while 28.4 percent from women.

With Trump leading the way, hate and bias are becoming accepted parts of the national dialogue. This thoroughly disrespectful man is making such attitudes respectable. We’re getting used to Trump. We’re accepting the way vast segments of America—Latinos, African-Americans, Muslims of all ethnicities, Asians of all religions—are being subjected to scorn and hatred, just as Japanese-Americans were during World War II. “A Jap is a Jap,” Lt. Gen. John DeWitt, commander of the U.S. Army’s Western Command, said in 1942. “The Japanese race is an enemy race.”

Michiko Kakutani, who was senior book critic for The New York Times, wrote in her former paper last week about those days, when her family was separated and incarcerated in distant parts of the country. She compared it to today: “Once again national safety is invoked to justify the roundup of whole groups of people. Once again racist stereotypes are being used by politicians to ramp up fear and hatred. And once again lies are being used to justify actions that violate the most fundamental American ideals of freedom, equality and tolerance.”

Immigration, as I’ve written here before, offers the true window on Donald Trump and his racist, authoritarian administration.

In the detention centers, and among the cruelly separated parents and children and the thousands denied sanctuary, we can see how the fragile protections of the Constitution and the courts are being whittled away day by day by a president who has no respect for them. That’s not speculation. That’s not anti-Trump rhetoric. Those are facts. Trump can’t hide them with more lies. We can’t afford to ignore this hate-filled behavior and abandonment of our country’s ideals.

(Bill Boyarsky is a columnist for Truthdig, CityWatch, the Jewish Journal, and LA Observed. This piece was posted first at Truthdig.com.)