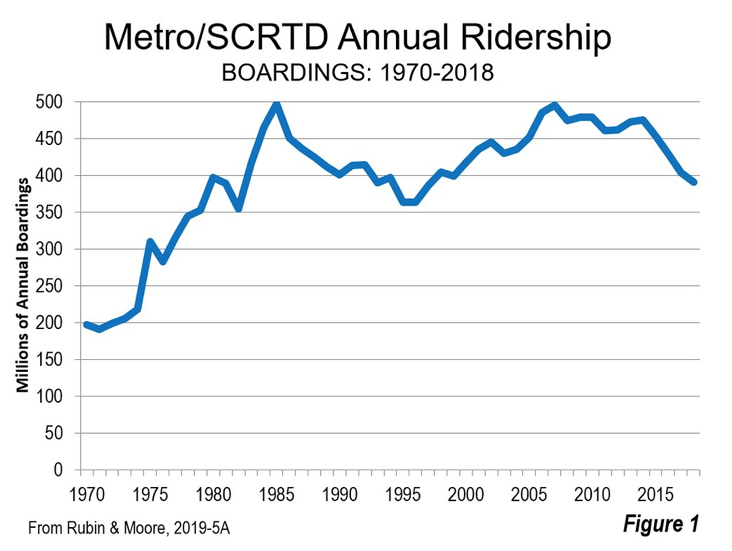 PLANNING WATCH-A municipal version of the dog bites man story surfaced last week, with another METRO report that ridership on buses, subways, and light rail has declined yet again.

Excuses and partial explanations abound, such as:

Flawed planning decisions have resulted in declining transit ridership. These partial explanations are either wrong or peripheral to the real explanation. City Hall and METRO officials, with the support of their professional staff, have made numerous flawed decisions that have driven ridership down, not up. We are not talking about Acts of God, black swan events, human nature, immigration, or LA’s automobile culture, but cumulative, wrong-headed planning decisions that have resulted in and will continue to result in declining transit ridership.

The proposed Purple Line Extension Transit Neighborhood (Specific) Plan (TNP) is the poster child for this approach. So please indulge me as I again explain how the TNP – if the City Council adopts it and the City Attorney can fend off certain lawsuits  – would further drive down transit ridership for decades to come.

Fatal Flaw #1. The TNP promotes high-rent market housing in lieu of low-income housing. At present Los Angeles offers developers easy workarounds to build auto-centric structures that exceed the height, size, and density requirement of LA’s zoning laws. These include discretionary zoning waivers, which sail through City Hall 90 percent of the time, plus never-inspected density bonuses that allow substantial increases in a building’s size, height, and density. In the case of the TNP, the proposed Specific Plan would be nothing more than an up-zoning ordinance. Furthermore, this approach has been buttressed by a METRO-paid-for real estate market study.  If the City Council adopts these new zones, developers could easily skip over discretionary approvals or density bonuses to build larger, taller, denser, and obviously more expensive buildings as by-right ventures.  What a deal!

Fatal Flaw #2. The TNP totally ignores METRO’s and LA City Planning’s first-last mile on-site and corridor improvements to promote transit use.  METRO’s first-last mile policies clearly require coordinated public improvements to be part of transit projects, such as the Purple Line Extension. These first-last mile policies are clearly spelled out in numerous METRO documents, and they are also referenced in the successive planning grants that METRO gave the City of Los Angeles for its five Transit Neighborhood Plans. Yet, there are no first-last mile transit enhancements at the Purple Line Extension stations and in adjacent areas, including the bicycle and pedestrian improvements listed in the initial City Council motion.  These missing first-last mile amenities include station stores and bathrooms, kiss ‘n ride zones, on-site park ‘n ride parking lots, station interfaces for pedestrians and buses, bicycle and scooter lanes and parking areas, sidewalk and intersection repairs, bus shelters, shade trees, and even wayfaring signs. 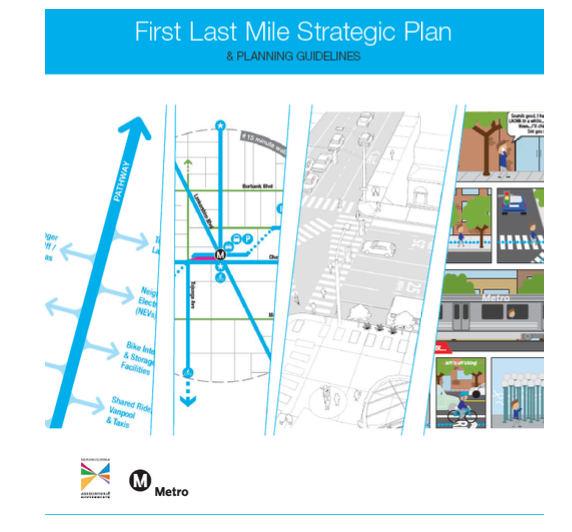 METRO rejects its own first-last mile policies for the

Furthermore, the City of Los Angeles has parallel policies and guidelines for public improvements to draw people out of their cars and onto rail, buses, bicycles, and sidewalks. Although LA City Planning prepared and posted LA’s Mobility Hubs and Complete Streets Design Guidelines on its website, City Hall also ignored its own first-last mile policies and programs for the TNP, even though Complete Streets has been a California planning law since 2008.

The interaction of these three Purple Line Extension TNP planning approaches will have real world consequences. They ensure that most of those who will live near the Purple Line Extension subway and adjacent bus corridors would be the least likely residents to use transit. Given the high rents they can afford, they will continue to rely on cars – whether their own or ubers -- for mobility.

Furthermore, early adapters who nevertheless choose to take the subway or local busses must overcome many easily prevented barriers:

It isn’t easy to plan for failure, but these three fatal flaws show that when self-inflicted blindness serves real estate interests, it can occasionally succeed.

NOTE: To research this article, I contacted METRO and City Planning staff for information on Purple Line Extension first-last mile public improvements. I eventually received a call back from a METRO public relations contact. He wanted to know the purpose of my article but did not answer my questions.