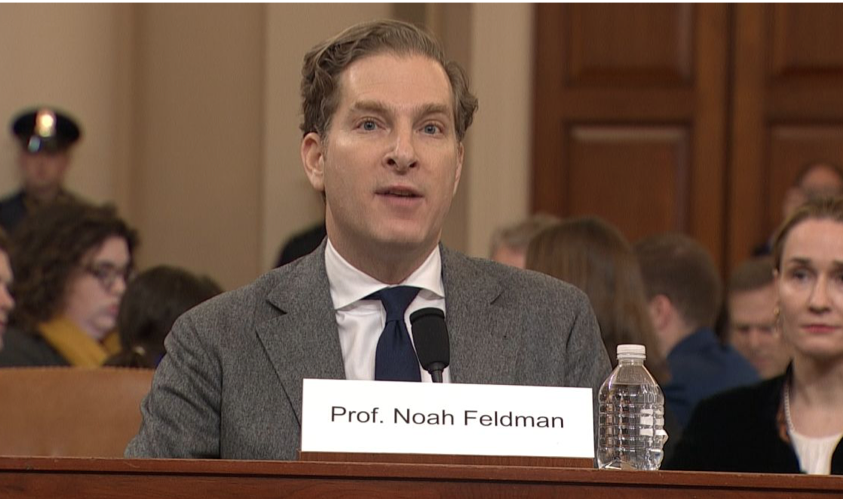 ONE MAN’S OPINION-“They have ears, yet they do not hear” has always been true. December 4, 2019 was no exception.

Harvard Law Professor Noah Feldman provided the world a road map to how Nancy Pelosi has subverted the constitution’s impeachment process for her own personal benefit. Those few Dems and GOP members who understood what Professor Feldman was saying are highly unlikely to explain it.

The Dems will remain silent on how Feldman showed Pelosi’s perfidy because exposing her machinations does not fit into their game plan. The GOP will remain silent as they would have to admit that Trump engaged in impeachable offenses in order to expose Pelosi. Thus, the masses will emote and cheer each side while wallowing in vast ignorance of what actually has been said.

The Bare-Bones of Feldman’s Indictment of Pelosi

As Prof. Feldman said, “After Benjamin Franklin also spoke in favor of impeachment, something remarkable happened: Governor Morris changed his mind. Morris had been convinced by the argument that elections were not, on their own, a sufficient check on the actions of a president who tried to pervert the course of the electoral process.”

Let’s be 100% clear. Elections cannot protect the Republic, making the impeachment process mandatory. Pelosi’s personal power rests in her controlling the Dem purse strings for elections, and if Trump leaves office, her power is greatly diminished. In order to protect her own personal power, Nancy Pelosi stopped the wimpy Schiff from calling all the witnesses that were required and she prevented Judiciary Chairman Jerry Nadler, to his eternal discredit, from calling a single fact witness.

As set forth in the U.S. Constitution, impeachment is both legal and political, but both are fact dependent. Under law, one needs to gather facts. The House’s fact gathering was proceeding properly with the depositions. Then, the House Intel Committee presented the preliminary witnesses and they were outstanding. In fact, Fiona Hill, Alexander Vindman, and even Amb. Sondland provided such a solid foundation, that the GOP members began signaling what more evidence they needed in order to stop supporting the President.

Weight, Weight of Evidence is Crucial

Is there any American over the age of 10 who does not know that people must be convicted “beyond a reasonable doubt?” That refers to the weight of the evidence. As the GOP members kept saying, “we need more weight to the evidence from people closer to the President.” Lawyers, who do this stuff for a living, knew that the GOP was telling the Dems what the Dems needed to do so that the GOP could politically Nixonize Trump.

The true jury in impeachment is the President’s own voters. GOP members of the House were looking at the voters and seeing signs that moderate GOP voters were about to turn against Trump. The weight of the evidence was not yet sufficient. Dems and the GOP knew that when higher up officials supported Vindman, Holmes and Ford, then the tide would turn against Trump just as the GOP public opinion turned against Nixon after John Dean testified and they saw the Rosemary Woods tape with its 18-minute gap.

No competent prosecutor lays a foundation and then refuses to call the star witnesses. That is exactly what Speaker of the House Nancy Pelosi did. She stopped the major witnesses; she stopped the fact gathering as the tide was turning against Trump.

Vital Facts that Show Pelosi’s Subversion of the Constitution

Prof. Feldman’s explanation continued: “The upshot of this conversation [about impeachment] in the constitutional convention was that the framers believed that elections were not a sufficient check on the possibility of a president who abused his power by acting in a corrupt way.”

Yet, that is exactly what Nancy Pelosi is doing. She is pushing impeachment into the November 2020 elections by stopping the necessary fact gathering before the weight of the evidence will allow GOP members to back away from Trump.

The GOP Would Have Abandoned Trump

The moderate GOP members hate Trump, but they know that if they cease to support the lunatic, they risk being primaried by the rabid Alt-Right. Nonetheless, the tide was shifting.

(1) The preliminary witnesses like Vindman, Hill, and Holmes were hailed as heroes. The Alt-Right attacks on them only made them stronger and their testimony more compelling. The threats to Vindman’s family were more than many moderate GOP members could tolerate and questioning Vindman’s and Hill’s loyalty because they were immigrants made millions of Trump supporters see where the immigrant bashing was headed.

(2)  Fox News was turning on Trump. Trump’s painful 53-minute rant on “Fox and Friends” showed that even Trump’s most ardent supporters could not conceal their true feelings. Then Fox News cut the live feed to a Trump speech when he started telling more lies. Pelosi is no fool. She knew that if Fox News turned on Trump, the GOP will soon Nixonize him.

(3) The GOP’s Three Fat Ladies were ready to testify after the federal court decision requiring White House advisor Don McGahn to obey the subpoena. Remember Pelosi had forced the subpoenas to be recalled. That meant the Three Fat Ladies -- Secretary of State Pompeo, Professional Loudmouth Giuliani, and Outspoken Bolton -- would have to volunteer to testify. Bolton in particular was signaling that he had damning evidence that he wanted to provide, but Pelosi refused to let Schiff reissue the subpoenas.

Let’s be very clear about who stopped the Three Fat Ladies from testifying. It was not Trump; the court overruled that. Nancy Pelosi is the reason spineless Schiff halted his committee before the modern-day John Dean and Rosemary Woods appeared.

Congress had a constitutional duty to gather all the facts in order to give life to the impeachment process as the sole way to protect the Republic from a horrible person like Donald Trump. Relying on elections is a betrayal of the nation.

Yes, Trump committed treason in many ways, but Dems are withholding the more probative evidence from the official records as Pelosi thinks that she can do better in November 2020 if Trump remains in office. I call that treason.

(Richard Lee Abrams is a Los Angeles attorney and a CityWatch contributor. He can be reached at: [email protected]. Abrams views are his own and do not necessarily reflect the views of CityWatch.) Photo: Doug Mills/New York Times. Edited for CityWatch by Linda Abrams.

A Discussion About Un-Empower LA (DONE)