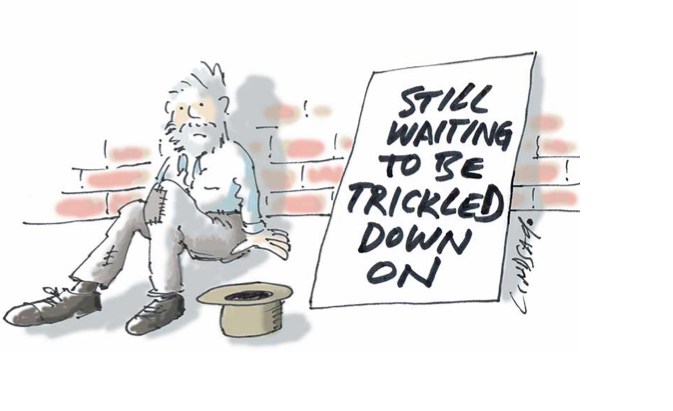 PLANNING WATCH-Top-down, trickle-down proposals to build our way out of worsening climate, traffic, and homeless crises are metastasizing right-before our eyes.

Programs based on these Reagan-era economic theories are thriving in the blue state of California, where Democratic officials, their supporters, and the few Republicans left, repeatedly spout the same tall tales about fueling private greed in order to solve chronic social problems.

In Sacramento California State Senator Scott Wiener, financially honored by prominent real estate interests, intends to bring Senate Bill 50, his California-wide up-zoning bill, back to the State Legislature in January 2020 for a third try. Since his old arguments to promote this bill gained little traction – that windfalls for developers are the silver bullets to solve the housing crisis – he is trying out a new argument. His pet legislation is not a handout to the developers who fund his campaigns.

Rather, its sole purpose is to increase consumer choice. If adopted and signed by Governor Newsom, Wiener’s bill would graciously allow prospective tenants to rent new, market rate apartments in neighborhoods whose zoning laws previously allowed single-family homes. Undoubtedly, the real estate industry representatives, who bankroll Senator Wiener’s Senate campaigns, would welcome these new investment opportunities. They will, therefore, continue to watch the Senator’s back, just in case he stumbles a third time.

At LA’s City Hall, similar trickle-down beliefs also guide new planning and housing ordinances. They, too, allow the rich to get even richer by dialing back the zoning, planning, and environmental laws that cap the profits they can extract from commercial and residential properties. If elected officials adopt new laws that allow real estate investors to build larger, taller, denser buildings by-right, the trickle-downers assure us that investors will over-build apartments in neighborhoods near mass transit and/or job centers. The resulting real estate boom will then increase transit ridership, pull down existing rents to affordable levels, and reduce the release of Green House Gases. Don’t ask the elected officials and their consultants why their promised results do not appear. In Los Angeles neighborhoods like DTLA, Miracle Mile, and Hollywood, new, pricey transit-adjacent apartments sit vacant for years, casting their giant shadows on traffic jams and homeless encampments. Apparently, some truths are so self-evident, they never need to be verified through hard data.

These, after all, are only some of the neighborhoods up-zoned through SB 1818, TOC Guidelines, and pay-to-play discretionary approvals. They will also be the recipients of more up-zoning gifts through three stalled trickle-down ordinances, and a new regional housing needs assessment plan (RHNA) from the Southern California Association of Governments (SCAG):

But, does this mean that City Planning did not have time for studies to prepare its Transit Neighborhood Plans? Hardly. They had time to obtain City Council approval to hire an economic consultant, BAE Urban Economics, to conduct detailed real estate market studies for all Transit Neighborhood Plan study areas. For example, BAE’s 109-page report for the three Purple Line Subway Extension stations, entitled “Purple Line Market Study and Demand Analysis,” was completed in March 2018. It addressed the entire Purple Line Transit Neighborhood Plan (TNP) area and concluded, “The current appeal of Wilshire Boulevard as a site for new development endures, which will be strengthened by the extension of the Purple Line.” And, “Unlike the office and retail sectors, residential development has been strong in the station areas, and rents surpass those in the broader Purple Line Extension Market Area. Residential activity has been focused in the La Brea station area, although the market is conducive to denser residential development anywhere sites are available in the station areas.”

Translated into plain English, according to City Hall’s real estate consultant, the Miracle Mile corridor is ripe for large, tall, luxury apartment buildings, such as the new Vision luxury apartments at 6245 Wilshire Boulevard, not far from one of LA’s many homeless encampments. So far, the homeless living in the Miracle Mile area have shown little interest in renting a Vision apartment -- for only $4000 per month. 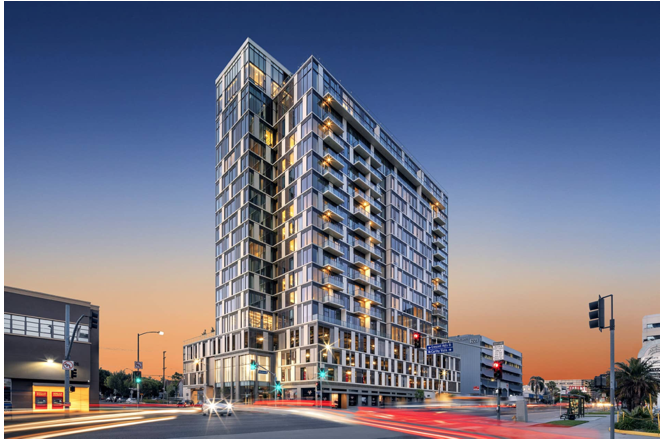 Will these-trickle down schemes actually work? Can giveaways from State and local government to real estate developers and commercial property owners, like those in the Miracle Mile corridor, somehow pull rabbits out of a hat? Will top-down up-zoning astoundingly increase transit ridership, reduce traffic congestion and Green House Gas emission, and resolve the housing crisis?

We already know the answer. The people who will benefit from these trickle-down scams are real estate investors and property owners. Up-zoning schemes, such as the Purple Line TNP, will allow them to either flip their properties or, per the BAE report, build large and highly profitable apartment buildings.  Either choice allows them to line their pockets, while the rest of us will be stuck with traffic jams, polluted air, and a persistent housing crisis.

This is why.  If the multiple proposals for LA, and the entire of State of California to grow it way out of a whole series of interconnected cruses through barely taxed gifts to real estate developers and commercial property owners strikes you as hare-brained, you are right. This is why:

1)  Public services: To expand the number and size of buildings in local areas, along with more residents and employees, without expanding supportive public infrastructure and services, creates a perfect storm of urban collapse. LA’s infrastructure is already decaying, and these real estate schemes will push the city over the edge.

2) Environmental review: By circumventing the California Environmental Quality Act (CEQA) through up-zoning, new projects could be built on earthquake faults, old oil fields, and other toxic sites. What happened at the LAUSD’s new Belmont High School [[[  https://www.nytimes.com/1999/07/28/us/a-200-million-school-that-may-never-open.html  ]]] could happen again, when developers no longer need to submit Environmental Impact Reports to decision makers.

3)  Increased inequality: The main form of the gifts to developers and property owners is up-zoning.  This allows them to flip properties and only pay capital gains. Alternatively, they can invest in new apartment houses and commercial buildings, reaping enormous profits, taxed at low rates because of the extensive benefits for real estate businesses baked into the tax codes. Up-zoning will, therefore, assure that economic inequality, one of the drivers of the housing crisis, will increase, resulting in more over-crowding, couch surfing, out-migration, and homelessness.

4)  Irrelevance of zoning to investment decisions: Cities like Los Angeles already have massive numbers of private parcels on which developers could build large, by-right apartment houses, but choose not to. To simply increase the number or such lots does not, in any way, increase the housing supply. Developers will continue to ignore most of these parcels since their decisions are not based on human needs but on opportunities to reap mega-profits. If a project returns enormous profits, it is a go. If not, it is a no go. This means that a few choice neighborhoods will get high end developments, with or without up-zoning, and the rest will be ignored.

5)  Declining population: One rationale for making the rich even richer is that LA needs them to build housing for LA’s expanding population. But there are no multitudes moving to LA. The city’s population is static, and some studies say even declining.

6)  Myths of filtering and supply-and-demand: Another rational for up-zoning is that over-building expensive housing helps the rent-gouged and homeless by driving down housing prices, but this is another tall tale. In Los Angeles filtering and supply-and-demand do not apply to housing. For evidence, tour LA neighborhoods with new expensive housing and undertake two counts. The first count will be the vacancy signs, and the second count will be the homeless. The evidence for the over-supply of expensive housing and the shortage of low-income housing will be right before your eyes

Considering these six obvious flaws in trickle-down real estate schemes, why do so many otherwise well educated, well spoken, and well-dressed officials and their minions fall for such baloney? While we consider the reasons, one thing is obvious, entire careers can be built by supporting real estate speculation.