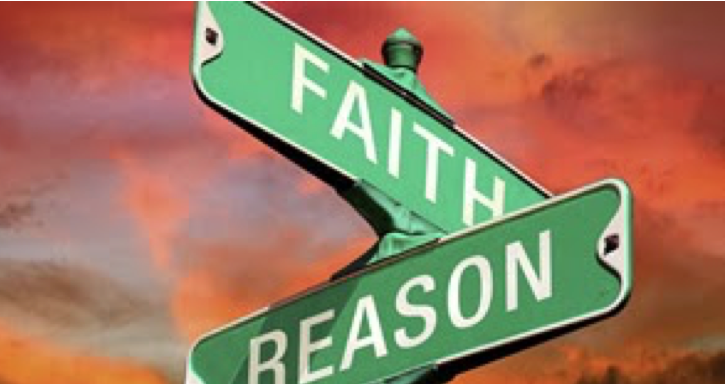 ALPERN AT LARGE--Some of us care a great deal about history and science, and demand debate with multiple points of view, and some of us demand unity and "purity" of thought to the extent that there will be punishment and ostracism for those who don't agree with the "correct" point of view.

Just because we're entering a new millennium doesn't mean that history, economics, biological science, math, and environmental science can be re-invented. We are NOT beyond history, and we are NOT beyond science, no matter which human being makes an edict to the otherwise.

Reason over Faith began in the West, and actually came from medieval Christian logic that led to the Scientific Method and to an explosion of scientific and artistic expansion of humanity's thinking. From St. Thomas Aquinas to Roger Bacon to Nicolaus Copernicus to Galileo Galilei, the demand for more than just Faith to be at the center of human thinking).

To this day, we owe much of the memory of Greco-Roman logic, history, and science to a few Irish monks and to other clerics. A few existed in the Arab world, although that remnant of the Roman Empire has a more complicated interaction with the rise of Islam than Europe and the West did with Christianity.

In short, Western thought, from the Renaissance to the Reformation to the Enlightenment, demanded logic to be injected into everything, and has promoted Reason over Faith with respect to analyzing science and history...but they were never necessarily at odds with each other.

From evolution to the Big Bang, many of our earliest philosophers and scientists after the Middle Ages had their faith cemented, not shattered by Reason. Learning about how amazing the microverse and the universe can make a person's faith in a Higher Power go up...although it can also lead to atheism. , dogma from a human-led Church gave way to a more pure-at-heart, sincere, and "God-focused" branches of Protestantism. To this day, Christian revivals tend to be within the realm of Protestantism, although Counter-Reformations and the Jesuits are not to be underestimated within the realm of Catholicism.

And the liberal arts were cherished from medicine to law to any sort of historical, economic, or artistic thinking, in that liberalism (open-mindedness, questioning everything, learning and listening to unorthodox points of view that could be closer to the truth than standard dogma) led to everything from capitalism to democracy to washing one's hands and one's diet. And, of course, the arts!

Enter the DENAISSANCE, where scientific and historical and sociological purity is a throwback to the Dark/Medieval Ages, and NOT to the advancement of either science or modern sociological thought.

1) In the Medieval Era, which was perhaps more complex than many who read Gibbon's "The History of the Decline and Fall of the Roman Empire) could be led to conclude, had a cherishing of "and a child shall lead them" to the point where there was a disastrous and bloody Children's Crusade, and a burning of Jeanne d'Arc (Joan of Arc) at the stake.

Children were exploited, and they paid a horrible price. And we do so again today, but perhaps in a series of different ways. The purity of Greta Thunberg's efforts to address climate change (LINK: ) is laudable and commendable, but her exploitation at the hands of adults is equally condemnable and horrifying.

Hence the support of activist Leonardo DiCaprio for Ms. Thunberg is both heartening and blameworthy all at once. And I assure you that in the fight for the Exposition Light Rail connecting Santa Monica and Los Angeles, in part fought for environmental reasons, Mr. DiCaprio was nowhere to be found (kudos to Ed Begley, Jr. and to Jimmy Smits, who were, though!).

Because scientists know that global warming/climate change is by far too complicated to just have it all rely upon the intentions of an honorable and well-intentioned teenager, and whose childhood is being marred and complicated NOT just by those she disagrees with, but by those who are egging her on.

2) While the climate change crisis is very real, the factors behind it, and the answers to it, are very complex and have been laced with hypocrisy and greed, and with an ignorance of both science and history...and woe be unto those who dare to question it!

For example, there are no shortage of evidence that climate change is both manmade and entirely natural, and is both a result of technological excess of the West but (even more so!) by the Third World who wishes no longer to lag the West in economics and quality of life.

It is China and Southeast Asia who are most responsible for manmade pollution at this time, but shall we deny such a large segment of humanity a better future and quality of life?

Yes, we should blame the leaders of the world for our environmental problems, but WHICH leaders?

There are, for example, no shortage of individuals who despise our current President but who decry the Paris Climate Accord as a big money grab from the West (whose population is going down, which would presumably decrease humanity's footprint, and yet is actively encouraging more immigration to restore its population) to the Third World.

Again, it is the Third World where most of the uncontrolled pollution occurs. It is the West which is coming up with innovative ideas to derive cleaner carbon-based fuels and alternatives to those fuels, but yet if (gasp!) nuclear technology is brought up, then (gasp!) it is certain to lead to the doom of humanity (and to those who dare raise it as an issue, despite its success in France).

It is the West where ideas such as cleaning the plastic from our oceans, deriving "self-destructing plastic" occurs.

But now it is also the West where "climate change" and "global warming" are being used for anything and everything, so that it is now the "god" and "religion" of those who claim to be promoting Science and Reason but are promoting Faith.

Southern California is burning, for example, NOT due to climate change but to a combination of irresponsible public utility practices, a lack of clearing of the underbrush in our forests that have been the proven standard for decades, and an overpopulation of unsupervised homeless individuals who are either accidentally or even purposefully setting these horrible blazes.

There is a vast, vast difference and distance between the tenets of Liberalism and Leftism. Ironically, one can find more "liberal" and "tolerant" thoughts on what used to be called the portions of educational and political thought from the Right. However, our universities and public figures too often promote ONE line of "correct" thinking, with punitive measures for those who dare disagree.

That is Faith over Reason, and Leftism over Liberalism. THIS is the DENAISSANCE.

This is part one of a two-part article. The next will address political and economic issues that have led to the rise of those who favor Bernie Sanders and those who favor Donald Trump.

Spoiler alert: Neither group of Sanders or Trump supporters are bad people, although the two men they support are deeply flawed, and hypocrites in their own lives. Sanders states the correct problems but derives the wrong answers. Trump fights the correct problems, but his operations and manner offends and insults too many Americans at a time when we must come together.

And yes, this is entirely related to the aforementioned denaissance.