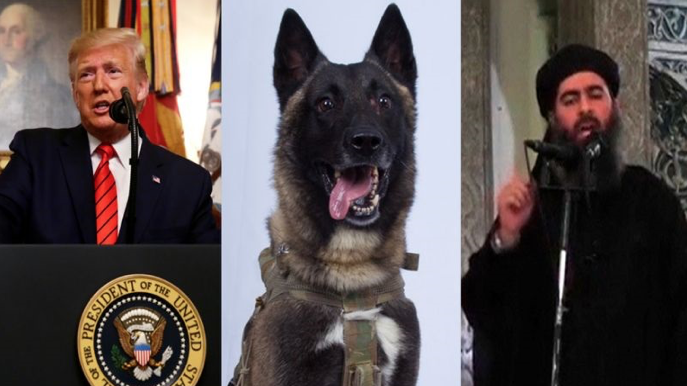 DC DISPATCH-In the Arab world, there are widespread prejudices against dogs -- for some, because of the belief that they are dirty animals that spread disease and for others because of various sayings allegedly attributed to the Prophet Muhammad (but nowhere in the actual Koran) describing dogs as unclean and unworthy animals.

It is hard, as an American, to sympathize with this view, but it is one that our President seems to share in spades.

What a pity that our Commander-in-Chief wasted an opportunity to celebrate the brave men and women of the U.S. Armed Forces who planned and executed the operation to eliminate ISIS leader Abu Bakr al-Baghdadi. Instead Mr. Trump engaged in cage fighting rhetoric, invoking images of Abu Ghraib and exaggerated grandeur, claiming that Baghdadi, chased by dogs, fled into a one-way tunnel and blew himself up  “dying like a dog--whimpering, crying, and screaming.”

Ironically, there were multiple German Shepherds (whose names remain classified) used in the operation to eliminate Baghdadi. The purpose of utilizing these highly trained and intelligent animals was twofold: to invoke the religious taboos about dogs and Islam, so that the enemy was in fear. Secondly, the dogs likely carried devices that would give the commandos eyes and ears in the tunnel. They could have been used to protect the lives of the humans in the operation as they made their way down the dark tunnel.

As much as I’d like to give Trump some credit for being at the helm of an operation to eliminate the head of such an evil organization, he missed the opportunity to laud the contributions of the dogs involved in the operation. So it came as no surprise that as information about the operation streamed out, someone notified our President that his pejorative remarks about Baghdadi’s death and its reference to dogs might be offensive to the pet-loving American populous. Sensing a shift, as people began to focus on the wellbeing of the K-9 dog that was injured in the course of the attack, Trump quickly changed his description (dead as a doornail) and toned down the rhetoric associated with our furry friends -- “Our ‘K-9,’ as they call it,” Trump said, “I call it a dog. A beautiful dog – a talented dog – was injured and brought back.” He even went so far as to publish a photo of the recovering pooch on his Twitter account. While these concessions are an improvement, they still stand in stark contrast to the words of a former Delta Force soldier. "The injury to the dog is an injury to one of us. These dogs are a special breed of courageous."

Indeed, one of the first secret warriors into the compound during the May 2011 raid that killed Usama Bin Laden may not have been a Navy SEAL or a CIA operative. It’s possible that it was a Belgian Malinois named Cairo – the one individual among the dozens of special operators on that mission whose name has been publicly released. This canine special operator went through a training program as rigorous as that of the SEALs and was exposed to the same hazards of war. And while the United States doesn’t have official awards for its animal heroes, our closest ally -- the UK -- does. 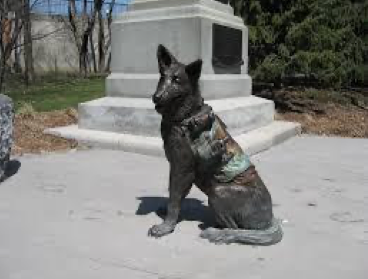 It’s called the Dickin medal and is awarded to animals of any type that have displayed “conspicuous gallantry or devotion to duty while serving or associated with any branch of the Armed Forces or Civil Defence Units.”  Eighteen British dogs have thus far received this animal equivalent of the Victoria Cross – two of them just last year, in Afghanistan. (There are also Animals in War Memorials in Hyde Park, London and Ottawa, Canada (photo left) to commemorate the service of countless animals who also suffered and died in more than a century of wars.)

In the early 2000s General Geoffrey Miller decided an overhaul of detainee management policy was merited. Relying on his experience in Guantanamo Bay, he noted that prisoners needed to “earn everything they had” and be treated “like dogs” and that “if you  allow them to believe at any point they are more than a dog then you've lost control of them." Sgt. Michael J Smith, a handler of Belgian German Shepherds at Abu Ghraib, was convicted on six of thirteen counts of mishandling detainees by intimidating them with his dog. This policy came into full view with the iconic and explicit images of an Abu Ghraib detainee on the cover of the Economist magazine in 2004. Still more shocking were photos of detainees with dog collars and leashes, on all fours, cringing before barking dogs. The Economist’s “Resign, Rumsfeld” cover and related covers were an attempt by the media to hold those  in the detention center’s chain of command accountable. Ironically, in the Muslim world, these stark images served to solidify biases about how Americans view them -- as animals unworthy of the dignity of human treatment.

The evolution of animal rights in the United States serves as a metric we could only hope that Asian and Middle Eastern cultures will one day follow. In the United States, dogs were not placed on this earth to be abused but to comfort, protect, and guard humans. It is no accident that neither Donald Trump nor his youngest child have a pet in the White House. Trump has long promoted his dislike of germs and four legged creatures. Even his preoccupation with appearances and media promotion has not persuaded him to acquire a pet. Several Presidents have had multiple dogs, cats, birds, and even an alligator and these selections have served to humanize our leaders and to distract the public. Many White House pets have been the subjects of children’s books. The adventures of Millie memorialized by Barbara Bush and the antics of the Obamas’ Bo and Sunny went far to humanize their owners. But Trump has remained resolute -- no pets. Maybe he should try spending some time getting to know the selfless animals that guard the White House and are involved in multiple Special Forces operations across the world. As the saying goes, “if you want a friend in Washington DC, get a dog.” Maybe it's time for Trump to get the friend he needs so he can learn how to wag the deep state’s tail.

(Sara Corcoran writes DC Dispatch and covers the nation’s capital from Washington for CityWatch. She is the Publisher of the California and National Courts Monitor and contributes to Daily Koz, The Frontier Post in Pakistan and other important news publications.) Prepped for CityWatch by Linda Abrams.