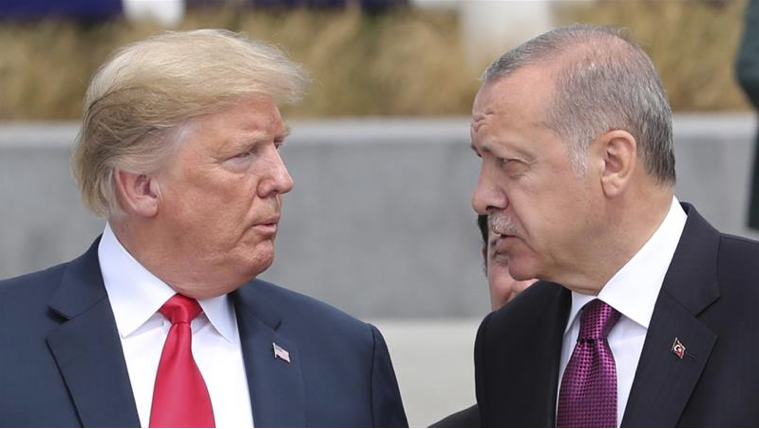 WORLD WATCH-There is no wonder that every person and news outlet that saw Trump’s letter to Turkey’s president Erdogan thought it was a joke.

When it was confirmed that the letter was indeed authentic, bewilderment and disbelief struck everyone who read it, as no U.S. president has ever written such a disgraceful letter which will be remembered in infamy.

Trump starts the letter by stating, “Let’s work out a good deal!” Yes, a good deal, just like another shady real estate transaction based on a wicked quid pro quo. Only a psychopath would forget that he gave Erdogan the green light to invade Syria to kill, destroy, and pillage the same Syrian Kurds who were America’s most trusted allies in the fight against ISIS and suffered more than 10,000 casualties. Throughout the war they remained steadfast as an ally, believing that the US would always watch their back, but they were crushingly disappointed.

“You don’t want to be responsible for slaughtering thousands of people,” Trump goes on to say in his infamous letter. Since when has Erdogan ever been concerned about slaughtering anyone that stood in his way, especially the Kurds whom he hates with a vengeance and has been planning for more than two years to attack and massacre -- men, women, and children.

Then Trump stated that “I don’t want to be responsible for destroying the Turkish economy – and I will. I’ve already given you a little sample with respect to Pastor Brunson.” First, Trump tells Erdogan to go ahead and wreak havoc on our allies, but then warns Erdogan that he will destroy the Turkish economy if Erdogan does not heed his demand. Well, if this isn’t the nature of a mentally disturb individual, then I don’t know what is.

Trump then proceeds by saying that “I have worked hard to solve some of your problems.” The question is, what has Trump worked so hard on with Erdogan when the two hardly ever see eye-to-eye? There is one exception though. Trump envies the Turkish dictator who has been ruling his country with an iron fist; subjugating, jailing, pillaging, and purging his own people with absolutely no qualms and no misgivings. Yes, Trump would love to rule over the U.S. and terrorize the Democrats to submission just like Erdogan, if he only had his way.

“Don’t let the world down”, Trump continues. What is that supposed to mean? Erdogan has let down the US, all NATO member states, and every institution Turkey is a member of or has any affiliation with. Erdogan is a criminal and has committed crimes against humanity. But then, what is there to say? Erdogan, after all, is a byproduct of the Ottoman Empire, which committed genocide against the Armenians as well as against the Greeks, but he conveniently denies that, albeit the historic records are irrefutable. 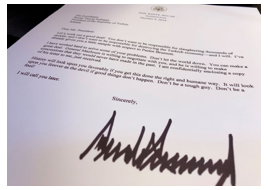 Trump goes on to say that “General Mazloum is willing to negotiate with you, and he is willing to make concessions that they would never have made in the past.” What is there to negotiate? Erdogan has been given a free hand all along. He has been killing his own Kurds for decades; he defied Trump previously by buying the Russian S-400 air defense system; he is interfering in the internal affairs of many countries, especially in the Balkans and the Middle East; and he is ignoring his Western allies, showing them his middle finger with a smirk on his face.

Now Trump dispatches his Secretary of State Pompeo and Vice President Pence to cajole Erdogan and beg him to agree to a ceasefire while granting him everything he wished for. With the green light given by Trump, Turkey invaded northeastern Syria with the purpose of establishing a “safe zone” for displaced Syrians, but more importantly to push out the Kurdish fighters who are viewed by Ankara as a security threat. In the main, however, Ankara’s goal is to prevent the establishment of an independent Kurdish state in Syria that could evoke a renewed drive by Turkey’s Kurdish minority to seek independence.

Just think about what actually happened. Here you have the President of the United States, no less, pleading for cessation of hostilities instead of demanding, in no uncertain terms, that Erdogan pulls out his forces immediately from Syria or face dire consequences. Erdogan, however, seems to take Trump for granted, feeling assured that the straw man in the White House will not take any punitive action not only because he lacks strategic thinking but because of his cowardice.

Trump stated that Pence and Pompeo scored a victory, when in fact it was Erdogan who emerged victorious. Erdogan succeeded in outmaneuvering Trump at every turn, with the U.S. caving into everything Erdogan wanted. Trump ceded ground in Syria, including U.S. military bases, and also agreed to lift the sanctions. The ceasefire may have stopped the killing of the Kurds, but no ceasefire will erase the United States’ betrayal of them. The price that the U.S. will end up paying will be hard to imagine.

Next Trump goes on to say that “History will look upon you favorably if you get this done the right and humane way. It will look upon you forever as the devil if good things don’t happen.” Will history ever look at Erdogan favorably? The so-called man whose despicable personality supersedes only his ruthlessness and brutality? Erdogan, who took pleasure in the ethnic cleansing of the Kurds, personifies the devil itself and is simply incapable of doing anything, as Trump puts it, “the right and humane way”.

Finally, Trump preaches to Erdogan, saying “Don’t be a tough guy. Don’t be a fool!” Well, Trump is simply looking at himself in the mirror. He is the one who tries to play the tough guy, and he is the real fool who occupies the White House.

“I will call you later.” This is how Trump ends the letter. Call Erdogan for what, just to tell him ‘Don’t worry, I still believe that my decision to pull out our troops from Syria was the right decision. You, Erdogan, just go ahead and do what you need to; just don’t make too much noise and don’t brag about it. Leave the bragging to me.’

(Dr. Alon Ben-Meir is a professor of international relations at the Center for Global Affairs at NYU. He teaches courses on international negotiation and Middle Eastern studies.) Photo: Presidency Press Service via AP. Prepped for CityWatch by Linda Abrams.