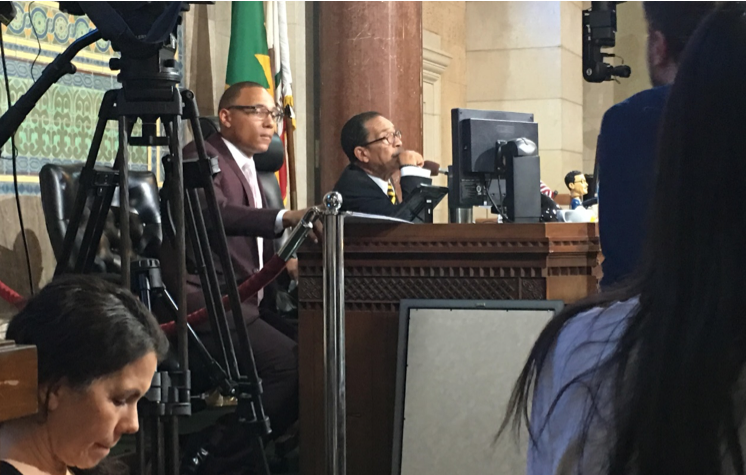 @THE GUSS REPORT-Today’s column revisits a recent LA corruption story to provide a behind-the-scenes look of how the LA Times has become a patsy of LA City Hall, as well as of other local governments, to the detriment of everyone in LA and around Southern California.

LA has the nation’s worst homelessness problem and other severe civic maladies because local media news outlets rely too much on what the LA Times reports, which is rarely thorough on government failure because it is too cozy with politicians who are unqualified, inept or corrupt.

Poor reporting and this unhealthy dependency on the LA Times are why incumbents keep getting re-elected despite abundant evidence that they consistently fail us.

Two Caveats Before We Dig In

First, part of the reason why this column doesn’t accept prepared statements about contentious issues from politicians’ media flacks is that their filtered, crafted words serve only to protect politicians from direct, live questioning. It is a one-way communication.

And second, this columnist refuses whenever those flacks ask me to submit questions because it is their way of screening and evading real accountability; it keeps the truth hidden. If their politician is afraid to speak openly about the provided subject it is to their detriment. I instead write around, and about, their dodges.

With that introduction, let’s shine a light on a story broken here a little more than a year ago. Or at least, that’s how the story started.

I caught wind of a story at that time that Wesson misused LAPD resources to obtain free security for a private family function, the September 2017 wedding of the son who works in his office, Justin Wesson, and Alexis Marin, an aide to Councilmember Nury Martinez.

This is the same Justin Wesson who this column exclusively reported allegedly committed up to 21 counts of voter fraud by misusing his parents’ address as his.

I asked Rodriguez about the LAPD story and she denied knowing anything about it. But in the blink of an eye, Zahniser had the story with quotes from her, leading me to conclude that she fed my inquiry to him to get a softer, gentler telling of Wesson’s rip-off of public resources for his private family function.

Rodriguez did not deny feeding Zahniser my inquiry, later asking me at a City Council meeting to grab coffee so we could, as Hillary Clinton infamously said, “press the reset button.” But as we walked to the City Hall café, I asked her what it was that she wanted to reset. She couldn’t answer and again did not deny my inquiry about her giving Zahniser my story. So I stopped in my tracks and told her that when she can explain what she wants to reset, she can always give me a call. I abruptly walked away without the coffee and went back to the meeting.

Wesson’s office has since refused to turn over public records related to his misuse of those public assets, but since there’s more than one way to peel an orange, I obtained them from other sources, so grab some paper towels and follow me because it’s a juicy story.

The column that the Times ultimately published, credited to Zahniser and Richard Winton, read, “Rodriguez, the Wesson spokeswoman, said in an email that she spoke to Justin Wesson and was told that ‘Justin and Alexis, with assistance from their families, paid for their entire wedding.’”

But according to an internal email, linked below, that statement was dictated to Rodriguez and that she “is uncomfortable with the situation I’ve been forced into.”

So uncomfortable that Rodriguez at 11:23 p.m. that night forwarded a copy of it to a private email address. Her doing this so concerned the office of recently FBI-raided LA City Attorney Mike Feuer (which screened the email before it was turned over to me) that it redacted that email address. . .not once, but twice. Yes, this column cracked Feuer’s first redaction.

Reading from the bottom-up, this link shows Rodriguez’s email exchange with Zahniser; her subsequently complaining to Wesson staffers about the “uncomfortable. . .forced” bind it put her in; and then her forwarding it to an unknown, double-redacted email address at 11:23 p..m that night.

Did Rodriguez anticipate needing to distance herself from Wesson’s corruption at some point in the future?

Let’s pause here for a moment to ponder all of that.

It’s weird. Feuer’s office made no such effort to protect my personal information in documents it filed in my recent legal victory over the LAPD on an unrelated matter. To whom and why did Rodriguez forward this troubling email? And more importantly, what else did she forward there?

If Feuer continues to hide from this column public information related to corruption, he may find his office hauled back into court by my attorney, Paul Nicholas Boylan, with the taxpayers picking up the tab.

Zahniser and Winton failed to address in their article what was really on their mind: whether Wesson’s current and former staffers illegally used political influence to get discounts from the wedding vendors.

The scribes may have pondered that because – as this column was first to expose – Herb Wesson has had severe personal financial troubles not just for years, but for decades. The Times only picked up on those stories after they were first published in this column.

Zahniser and Winton disingenuously wrote, “Vanessa Rodriguez, a spokeswoman for Wesson, declined to answer a series of questions about wedding security costs, saying the answers should come from the LAPD.”

But as Zahniser’s email proves, their inquiry was about misuse of City Hall power to obtain other discounts and freebies for Wesson’s family.

How’s that for irony? This column didn’t play by City Hall’s one-way communication tactics but wound up getting the more in-depth story despite Rodriguez’s alleged efforts to undermine it, while the Times passively accepted the status quo of hidden corruption.

What are they going to do, not invite me to their Indigenous Peoples Day party?

This is where the FBI should dust for fingerprints because City Attorney Mike Feuer is covering up more than what I explained in today’s column. The City of LA is hiding records related to this story, and Feuer is at the core of it.

(Daniel Guss, MBA, is a member of the Los Angeles Press Club, and has contributed to CityWatch, KFI AM-640, iHeartMedia, 790-KABC, Huffington Post, Los Angeles Times, Los Angeles Daily News, Los Angeles Magazine, Movieline Magazine, Emmy Magazine, Los Angeles Business Journal and elsewhere. Follow him on Twitter @TheGussReport. His opinions are his own and do not necessarily reflect the views of CityWatch.) Prepped for CityWatch by Linda Abrams.