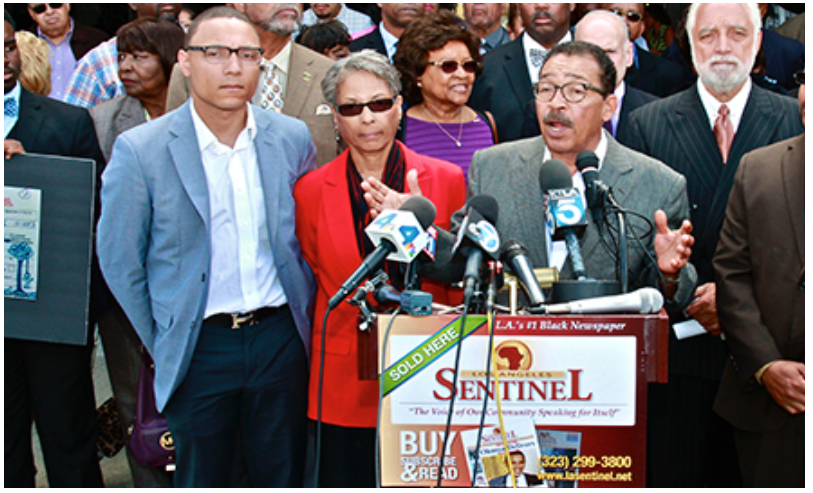 @THE GUSS REPORT-Should Justin Wesson, (photo above, left) the son of LA City Council president Herb Wesson, ever run for his dad’s elected office (a rumor floated solely by the LA Times), the first question any opponent should publicly pose to him is this: Is it true that you lived with your parents between the ages of 26 and 36, despite having a six-figure salary as Floor Director of the LA City Council?

According to the younger Mr. Wesson’s voter registration history, that is precisely what he claimed under penalty of perjury each time he voted since May 19, 2008.

Odd as that man-child scenario might be, it is highly improbable because that would also mean – at minimum – that he lived with his parents at their Virginia Road address through the first 15 months of his marriage and his entire engagement to Alexis Marin, a similarly salaried aide to Councilmember Nury Martinez.

This mutual exclusivity indicates that Justin Wesson knowingly voted illegally in as few as two and as many as 13 elections, while employed in a government gig deeply involved in voting districts and gerrymandering with his father at the controls, with the younger serving as the elder’s daily chauffeur.  A vote-by-mail explanation would be no less incriminating because the younger Wesson’s ballot would have gone to his parents’ address while he resided elsewhere; something an aspiring politician would inherently know is improper and illegal.

But a remarkable thing happened just a few days ago, and it casts an ugly light not only on Justin Wesson’s residency ruse, but also on the office of LA County Registrar-Recorder Dean C. Logan.

Back on September 7, this column submitted to Logan’s agency a public records request for the entire voting history of the younger Wesson and his new bride Alexis Marin in order to compare where each lived and when they voted.

At first, Logan’s office didn’t provide the requested records, instead opting to extract information and put it in a spreadsheet for me. When problems with that information were immediately raised, they failed to respond to the request within the mandated deadline. Finally, when the records were provided on October 12, an odd thing jumped out: Justin Wesson changed his voter registration just a few hours earlier, and for the first time in 10 years, 4 months and 21 days.

That, my friends, is one heck of a coincidence.

Wesson changed his voter registration to the South Pasadena address where his wife has been registered to vote since July 5, 2017.

I brought this matter to the attention of Brenda Duran, Media and Communications Director for the Registrar-Recorder, who subsequently said that she asked the staffers who handled my records request whether any of them directly or indirectly leaked my inquiry to Wesson or an intermediary.  Duran says that nobody admitted to doing so, and she therefore concluded that there was no leak.

So, Justin Wesson, whose livelihood surrounds all matters pertaining to elections, either repeatedly committed voter residency fraud or did not reside with his wife for the first 15 months of their marriage, or during their engagement, until just a few days ago. (This is the same marriage where LAPD resources were recently misappropriated for security at their private family wedding.)

Justin Wesson’s residency shell-game may also explain why on the coincidental date of October 12 back in 2012, LA Superior Court Judge Mark A. Young issued a $26,000 bench warrant for his arrest for failing to appear, or have an attorney appear, related to two then-pending DUI charges; the court paperwork may have been sent to an address where he did not actually reside.

Neither Wesson nor Marin, who was a registered Republican before marrying into the Wesson family, responded to a request to field questions.

Justin Wesson had the ultimate mentor when it comes to falsifying voter/candidate residency. His father, City Council president Herb Wesson, played a similar shell-game when he left the Speakership of the California Assembly and needed to establish residency within the City of LA’s 10th District in order to run for LA City Council.

According to his voter registration history, the elder Wesson claimed to reside at 3914 W. Adams Blvd starting on June 13, 2005, only to cancel that affidavit just 9 days later on June 22, 2005 for another address. His wife, Fabian, never registered to vote at that address.

Need more bizarreness? That property is owned by one Anita Thomas, who is believed to be Herb Wesson’s cousin. When asked earlier this year, the senior Wesson refused to state whether he ever lived at that address.

And finally, speaking of leaking information, Wesson’s media relations person Vanessa Rodriguez recently approached me at a City Council meeting to grab a coffee and “press the reset button,” though she was unable to explain what needed to be reset. As we walked toward the Homeboy Café, I asked her why she leaked questions that she solicited from me (that she never answered) to LA Times City Hall reporter David Zahniser regarding the Wesson wedding security controversy. She shrugged and suggested that LAPD spokesman Josh Rubinstein, who has responded truthfully and professionally in every single interaction, was the leaker. Rubinstein emphatically and believably denied being the leaker, asserting that he had no reason to do so. Zahniser did not respond when twice asked who tipped him off.

(Daniel Guss, MBA, is a member of the Los Angeles Press Club, and has contributed to CityWatch, KFI AM-640, Huffington Post, Los Angeles Times, Los Angeles Daily News, Los Angeles Magazine, Movieline Magazine, Emmy Magazine, Los Angeles Business Journal and elsewhere. Follow him on Twitter @TheGussReport. Join his mailing list or offer verifiable tips and story ideas at [email protected]. His opinions are his own and do not necessarily reflect the views of CityWatch.) Prepped for CityWatch by Linda Abrams.