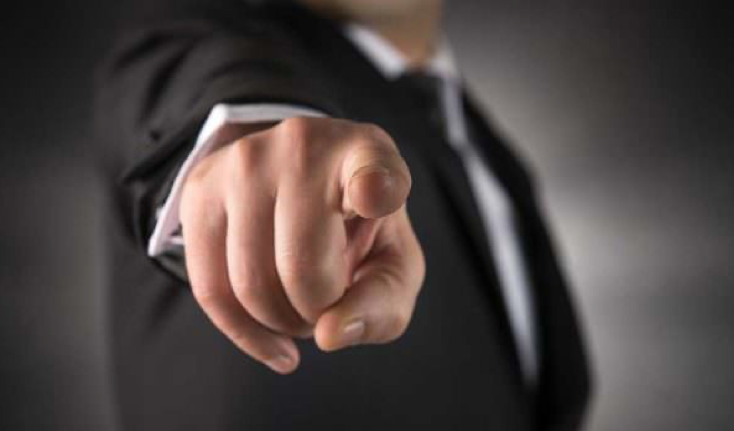 ALPERN AT LARGE--The old adage, repeatedly forgotten, remains true: "Point one finger at someone else, and four others are pointing right back at you." Kind of like that other old adage about "he who lives in glass houses shouldn't be throwing stones."

So those of you who hate all this nation did and does wrong, and certainly will do wrong, and talk about how other nations do it better, and decry the stalwarts that hold much of this nation together (despite being indisputably flawed and awful)...well, you're no better.

1) Case in point: Much of what keeps a hunk of the nation supporting the brash, trash-talking, tactless, and unpredictable president adheres to him NOT because they like him...but because his opponents are so much worse.

It's one thing to consider the President worthy of impeachment, but how much more credible is it to say that--with respect to Trump, Biden, and both of their families--a pox on both of their houses!

Politically incorrect Trump hater Bill Maher at least has it correct when he reports that Hunter Biden's malfeasance is no less scandalous than if Donald Trump, Jr. did it.

Trump? A terrible person, by many standards. But Trump-haters Pelosi, her nephew Gavin Newsom, and all the Democratic and Republican Trump-haters?

All just terrible, terrible people who've gotten rich and presided over a California where income inequality, the economy, the environment, and the cost of living have thrashed the average Californian.

2) NBA Commissioner Adam Silver, Spurs Coach Popovich and Warriors Coach Steve Kerr, all decrying America as racist and anti-LGBTQ and awful but kowtowing and kissing butt to one of the most freedom-squelching, cruel, cheating, and anti-free speech powers in the world...China?

You're all just terrible, awful, disgusting, cowardly monsters. You suck up to China's money and decry the American freedom-loving and competitive culture while ignoring all the financial, human rights, religion-smashing, and environment-destroying efforts of what might just be the most dangerous nation on this planet.

The Chinese aren't bad...but their leadership and censorship has created something more Hitleresque and fascist than anything seen since Mao or Stalin or even Hitler. And you just loooooove their money. Trump may suck...but you suck infinitely MORE.

3) All the climate change screamers like DiCaprio, Gore, and all the others who use more electricity and environmental damage in your private jets, your big houses, your multiple electronic devices than the rest of us, who want only to live within our means and practice environmental/sustainable efforts every day...but also support you jack-holes?

You're the WORST kind of hypocrites whose "green efforts" have resulted in a lot of "green" money flowing your way while you live like aristocracy at the expense of the rest of us.

And just because most of the environmental movement is rife with financial conflicts of interest, illiterate and uneducated "activists" whose blind faith has supplanted rational/critical thinking...doesn't mean the rest of us who stayed awake and still do explore climate science aren't so stupid that we're not on to you.

Environmentalism...yes. Scientific illiteracy and ignorance and financial betterment at promoting pseudo/faux-environmentalist "science"...no. You're not heroes. You're not freedom fighters.

At best, your animals being led to the slaughter. At worst, you know damned well what you're doing, and diverting from the terrible, hypocritical monsters you are to this planet and its citizens.

4) Sure, Trump is a pig. But Hollywood is kinder to women? More open to free speech? Pro-America like they were back in the days of Jimmy Stewart, Lucille Ball, and John Wayne?

No, Hollywood--Harvey Weinstein was emblematic of a much bigger culture, and it wasn't either moderate, right-wing, Trump, GOP, or any other previously-unifying force that is bringing Hollywood down. Others may suck (including the President) ...but YOU suck so much worse!

5) Oh yes, there are the legions of virtue-signaling millennials, who to their and our downfall have NEVER learned critical thinking, NEVER learned of the virtues of tackling both (and sometimes three to four) sides of an issue.

Who was Hitler? What was the Final Solution, and why was it "final" when originally Hitler wanted to expel the Jews but was rejected by all other nations (including the U.S.)? What does that have to do with Jimmy Carter, who made damned sure that Cubans and Vietnamese could come here to avoid persecution?

Who was Mao? Who was Che? (You know, the monsters whose shirts you wear, and by proxy become monsters yourselves?) Who was Castro? What is Venezuela?

Is Sweden and Canada as socialist as you think they are? (HINT: they're NOT!)

What does the 1% pay in taxes, and why DOES Governor Gavin Newsom and other major Californian players kiss up to Chinese, Technology, and Hollywood overlords who pay the taxes so the rest of so much of California doesn't have to? Wonder what that does to civil rights, income inequality, affordable housing, and the rights of the average Californian?

You're not "woke" but rather (at best) the victims of educational malpractice by teachers either less educated or smart than you, or (at worst) people who've been lied to in order to be the mindless "sheeple" to serve the needs of those who just LOVE your lack of critical thinking.

Critical thinking, by the way, that should make you wonder about ME or anything that yours truly has to say?

And if you, the "young and woke" latch onto those lies, you're REALLY not woke. You're just terrible.

Terrible, awful people no better than Catholic, Christian, GOP, right-wing hypocrites who virtue-signal in their own ways but who are, in fact, godawful, terrible people.

Maybe we should ALL get down on our knees and beg forgiveness...either from our fellow humans, our planet, or (if you still believe) God. That old, aged, oft-decried-but-rarely-read book called the Bible suggests we're ALL hypocrites (me included).

But this piece is mainly about the virtue-signalers.

You're NOT the solution...you're the problem. You suck. You're just terrible, terrible people!