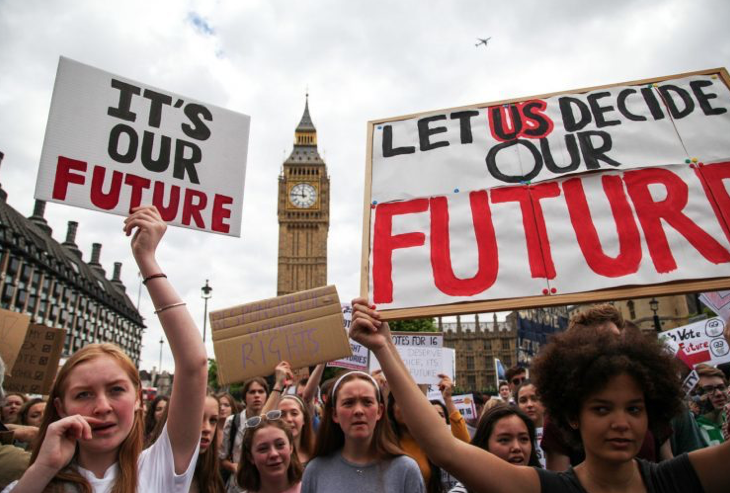 NEW GEOGRAPHY-The next great political civil wars won’t be over race, the nation-state, religion or even class.

They will be generational, pitching the Boomers, who still dominate the global economy, against their offspring, the Millennials, who assuredly do not.

Of course, generational conflict has been a feature of politics for, well, generations, but in the past older folks had at least bequeathed their offspring the prospect of a better future. Now, according to Pew, three in four American adults think their children will not grow up to be better-off than they are. Views about the future are, if anything, more pessimistic in France, Britain, Spain, Italy, and Germany.

This intergenerational pessimism is particularly acute in  Japan, where a remarkable three-quarters of those polled believed things will be outright worse for the next generation; similar sentiments also predominate in Taiwan, Singapore and South Korea, and in developing countries including India, South Africa and Nigeria. Even in China, many young people face a troubling economic future; in 2017, eight million graduates entered the job market, but most ended up in with salaries that could have been attained by going to work in a factory straight out of high school.

The Boomers got when the going was good. Beneficiaries of the hard work and courage of their own parents, the so-called Greatest Generation, they rode an expanding world economy and bought reasonably priced assets that have since increased dramatically in value. But where Boomers rode on an ascendant middle class, today Millennials inherit a world, notes the OECD, where the middle orders are shrinking, leaving them in danger of becoming what a recent St. Louis Fed Study warns is becoming “a lost generation” (PDF) in terms of wealth accumulation.

By any measure, The fall has been steep. Among those born in 1940, about 90 percent of children grew up to experience higher incomes than their parents, according to researchers at the Equality of Opportunity Project. That fell to 50 percent for those born in the 1980s.

Property, more than anything, defines this divide. Over the past decade, home ownership among the young has plummeted markedly in Australia— a country with a strong tradition of middle- and working-class homeownership— as well as in Great Britain. According to a 2018 report, twice as many British Millennials were living in rental housing than their Generation X predecessors. At least one third of British Millennials are likely to remain renters for life.

This trend seems likely to spread to China, which for the last three decades has seen a remarkable growth in homeownership. Now faced with soaring property prices, many children of the working, and even the middle class, seem increasingly unlikely to achieve yeoman status. A growing percentage of all apartments are now rentals, particularly in expensive cities such as Beijing and Shanghai. The next generation of Chinese seem destined to pay rent to the land-owning class as opposed to owning a “piece of the pie” themselves.

Generational differences are critical here. The prime winners of property inflation — estimated at $30 trillion globally — have been the aging rich, who will benefit from expanding rental income. In this new order, inheritance, notes Thomas Piketty, seems destined to “make a comeback.” In France, the share of inheritance of the whole GDP has grown from roughly four percent in 1950 to 15 percent in 2010, with many inheriting bequests that amount to lifetime earnings for a poor worker. This shift is even more pronounced in Germany, Britain and the United States.

In all these places, the children of property-owning parents are far better situated to eventually own a house (often with parental help) and enter the funnel of privilege. Among the youngest Millennials, those 18 to 22, over 60 percent see inheritance as their primary source for wealth as they age. In California now, 40 percent of young adults still live with their parents.

Left without property, the only product that the new generation still own is their own data. But we are handing that to oligarchical firms in exchange for free services, creating what French analyst Gaspard Koenig describes as “digital feudalism.” This is not a “sharing economy,” he writes,” but an optimized, extractive economy — based on the near-infinite availability of raw material (our personal data) — that enriches a few companies at the expense of consumers.” As this data becomes more important, reaching up to 20 percent of the Europe’s GDP, the increasingly propertyless middle class will hasten their transition into “digital serfs.”

Historically younger people have been adept in finding opportunities to reach the middle class. But today’s grassroots economy is being squeezed by relentless concentration. Today ,for example, the five largest banks now account for nearly 50 percent of all banking assets, up from barely 30 percent 20 years ago. This hurts the Main Street economy, as can be seen in the reduction— in sharp contrast to the 1980s and 1990s—in entrepreneurship, particularly among the young. Similar phenomena can be seen in Canada, the United Kingdom and Australia . Working your way up is becoming increasingly difficult as opportunities dwindle outside the largest firms; in the US , the chances of middle-class earners moving up to the top rungs of the earnings ladder have declined by approximately 20 percent since the early 1980s. Corporate CEOs used to boast of starting out in the mailroom. There will not be many of those stories in the future.

This transformation is particularly marked in the tech economy, where the stories about the “bogeymen in the garage” are just that now: stories. With the rise of “super-platforms” the period of open competition has atrophied; today’s tech elite reflects John Kenneth Galbraith’s assertion that in the long run technology inevitably relies on capital accumulation, concentration and size of enterprise; indeed since the rise of the tech economy in the 1990s, the overall degree of concentration has grown by 75 percent.

Given the fantastic resources of the largest companies many startups today are formed not to become larger themselves but to be acquired, the historic start-up culture strangled by oligarchic domination. Like the peasant farmer or the artisan in the feudal era, the entrepreneur outside the golden circle of the big venture firms lives largely at the sufferance of the tech overlords . The emerging reality of the tech world, whether in China or America, is increasingly feudal and hierarchical. One on-line publisher recently compared his firm’s relationship to Google to that of the Borg in Star Trek, whose goal is to make inferiors “service” them.

The decline in aspirations is weakening support for liberal capitalism, particularly among younger people. Confidence in democracy has weakened even in such enlightened countries as Sweden, Australia, Great Britain, the Netherlands and New Zealand. This disdain extends towards the established parties both right and left.

Populist and nationalist parties do better among younger votes in Sweden, Hungary, Spain, Poland and Slovakia than the general electorate. Poor economic prospects and fear of mass migration from Muslim countries seem to be propelling this trend. Many right-wing nationalist parties are also led by Millennials, something that seems to help them with this cohort; these are no longer the retread fascists of the old right-wing although some identify with Frankish king Charles Martel, who fought Muslim armies in the 8th century.

Even American Millennials are surprisingly attracted to right-wing populism . In November 2016 more white American Millennials voted for Donald Trump than Hillary Clinton. Identification with the Democratic Party has dropped significantly since 2016 among all Millennials, and now is less than a majority. One recent Zogby poll, something of an outlier, found nearly half of voters under 30 favored the President.

Most Millennial enthusiasm, however, focuses on  the non-establishment left. In France’s last Presidential election, the former Trotskyite Jean-Luc Melenchon won the under 24 vote, beating the “youthful” Emmanuel Macron by almost two to one. Similarly, the United Kingdom’s Labour party, under the neo-Marxist Jeremy Corbyn, won over 60 percent of the vote among voters under 40, compared to just 23 percent for the Conservatives. Across Europe, the ascendent Green Party enjoys wide youth support.

The shift to hard left politics also extends to the United States, historically not a Marxist hotbed. In the 2016 primaries, the openly socialist Bernie Sanders outpolled Hillary Clinton and Donald Trump combined. A 2016 poll by the Communism Memorial Foundation, found that 44 percent of American Millennials favored socialism while another 14 percent chose fascism or communism. By 2024, these Millennials will be by far the country’s biggest voting bloc.

The left-ward shift could prove jarring not just for conservatives but the Baby Boomers and Xers who dominate the Oligarchy. Young activists may not tolerate the Oligarchy’s excesses as did early generations of more comfortable environmental advocates. After all, if the world is on the verge of a global apocalypse, how can the luxurious lifestyles of so many of the world’s most public green advocates, from Prince Charles and Richard Branson to Leonardo del Caprio and Al Gore, be tolerated?

Over time, our fashionably left-leaning Oligarchs may discover that their apparent political allies, and even their own employees could soon rebel against them. There’s even a growing socialist movement among tech employees in Silicon Valley, many of whom have little chance to replicate the opportunities for wealth accumulation— their debt and lack of assets makes them particularly vulnerable to a new recession— enjoyed by prior generations in the Bay Area. Unsurprisingly some oligarchs are already making emergency escape plans should civil unrest break out in their western homelands.

The shift towards the extremes reflect the common pattern—seen in interwar Europe, particularly the Weimar Republic—when a generation has given up on the existing system’s ability to create a better future. If you know that your career prospects are limited, that you will never own a house or a business, why not favor a politics that appeals either to your resentment or provide the prospects of ever greater subsidies. Forget about having children, or buying a house. More appealing may be the prospect offered by modern Marxists of “a fully automated luxury communism” where technology has obliterated not just scarcity but resulted in a “post-work society.”

Ultimately the growing chasm between the generations sets the stage for a new era of ever more polarized politics. The relative calm of post-war America and Europe reflected rising expectations, improved class mobility, better living conditions and greater opportunities. The reality facing the Millennials, and those younger than them, are far grimmer, and less promising. The older generation needs to realize that, in order to preserve their gains, they will have to share the wealth and restore opportunity with their next, or risk losing it all.

(Joel Kotkin is the Roger Hobbs Distinguished Fellow in Urban Studies at Chapman University and executive director of the Houston-based Center for Opportunity Urbanism. Doug Havard is a public-school educator and Ph.D. student at Chapman University’s Attallah College of Educational Studies. This piece first appeared in the Orange County Register.)