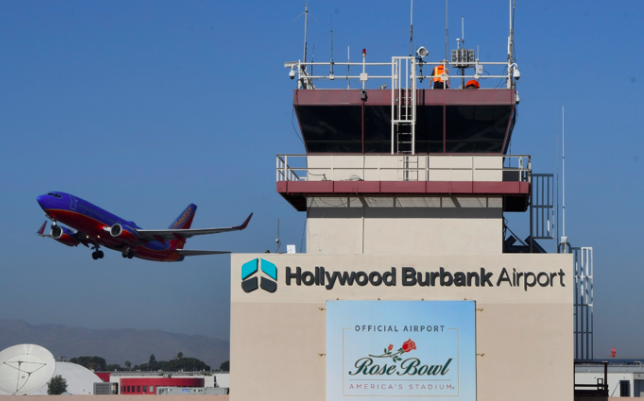 It seems ironic that this day, a somber anniversary of an atrocity committed against the United States, was chosen to discuss aircraft departure noise. However, to the credit of the organizers, the meeting did start with a moment of silence in honor of the victims. (Photo above: Daily News.)

Presentations were made by groups opposed to what they perceive as a deliberate attempt by the FAA and the airport to shift the flight paths to the south of the 101 and up in the hills to Mullholland Drive as part of a plan to align them with the NextGen system, which some say will create a narrow highway in the airspace over their homes.

Indeed, there has been no prior public outreach or EIR, but the system has not been activated in this region yet.

There is also no credible evidence to support the assertion that officials authorized the change to the flight paths: no paper or email trail, whistleblowers, not even hearsay from sources within the aviation community.

The FAA points to a 22% increase in flights out of Burbank over the past two years as a possible reason for the noise. In an effort to accommodate the growing volume of traffic and move the planes out of the congested airspace as quickly as possible, pilots and air traffic controllers could be making adjustments “on the fly,” so to speak, in the interest of safety.

Speed might be an issue, too. The faster a plane flies to separate itself from other departures, the wider the turning radius. This would tend to push more flights south of the 101, all other things being equal.

But the opposition groups and nearly all members of the task force have shown they are not even interested in these possible operational considerations.

What is missing is input from pilots and ATC personnel. Without that, this task force is tracking toward a rush to judgment. And believe me, their lack of probing questions directed at Studio City for Quiet Skies and UpRoarLA suggests favoritism might be in play. This snip from UpRoarLA’s web page indicates that some minds are probably made up: 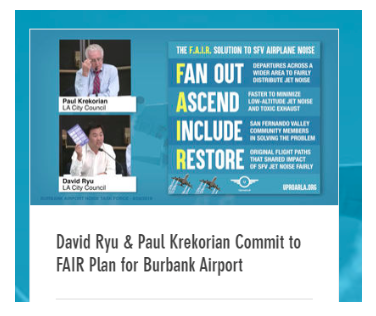 This video is more telling. So what does F.A.I.R. really mean?

Fair – but only in their parlance.

Just as biased is the proposal made by former Burbank Airport executive director, Dan Feger:

Operation TWIST, Turn West Immediately and Spread Tracks. Direct departing planes to turn west immediately and spread out the flight paths more equitably instead of a narrow track, while returning to the “historic” practice of turning aircraft west before the 101 freeway.

In other words, saturate the northern airspace.

Chubby Checker might approve, but it is not exactly equitable, not to mention it will exert more stress on the aircraft.

Let’s talk about the historic aspect.

I have lived in Valley Village since 1986. Yes, there has long been significant air traffic overhead in my part of the Valley and neighborhoods to the north. Studio City and hillside residents are quick to point out that we knew the noise existed when we bought our homes, and they purchased theirs because of an expectation of tranquility.

As if conditions do not change over time. It is naïve to assume the problems of an urban existence will not find your neighborhoods.

The population of the entire Valley has grown, with it the demand for air travel from Burbank has increased accordingly. I guess we could instead route most of these travelers to the freeway from Hell -- the 405 -- to LAX.

This gets into a whole other can of worms about urban planning in Los Angeles, but that is beyond the scope of this article. I will leave that to activists like Jill Stewart, whose work and energy I admire.

I will say, just as Senator Scott Weiner’s draconian vision for development is unacceptable, so is the pretentious attitude of certain groups and their supporters that dumping the noise problem on other communities is fair.

And to our elected officials, especially Council Member Paul Krekorian and Congressman Brad Sherman, whose districts are in the vortex of this dispute, your failure to make the rest of your constituents aware of what’s at stake for them amounts to gross negligence.