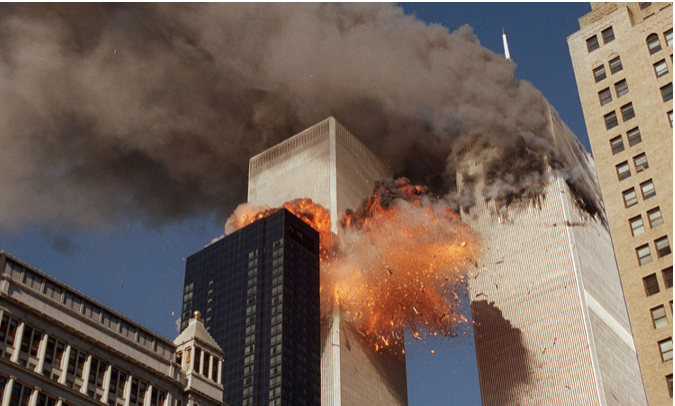 VIEW FROM HERE-I know that World Trade Center Building 7 was not brought down by office fires.

I know this because of my capacity to reason. The building fell symmetrically in less than seven seconds at free-fall acceleration for the first 100 feet. The overall building mass fell uniformly through what was the path of greatest resistance. The kink in the roofline is characteristic of a demolition timing sequence where the walls are collapsing inward. All of the debris ended up in a compact pile centered within the building’s footprint. In short, the hallmark characteristics of controlled demolition.

The oral history testimony of firefighters, police officers, medics, and other eyewitnesses cannot be ignored. Many people reported loud bomb-like explosions before and during the collapse of all three WTC towers. This oral testimony is coupled with the physical evidence of thermite found in the dust by former BYU professor Dr. Steven Jones. Thermite is a pyrotechnic composition of metal powder fuel and metal oxide. When ignited by heat it undergoes an exothermic reduction-oxidation (redox) reaction. The rare and destructive type found by Jones in the WTC complex could have accomplished what transpired that tragic day.

Moreover, there are thousands of scientific experts who have used their professional experience to deconstruct those horrific events. In April 2008, a letter from Scholars for 9/11 Truth was published in The Open Civil Engineering Journal. In July 2008, an article by Dr. Steven Jones and others was published in The Environmentalist. And in April 2009, Danish chemist and STJ member Dr. Niels H. Harrit, of the University of Copenhagen, and eight other authors published a paper in The Open Chemical Physics Journal, entitled “Active Thermitic Material Discovered in Dust from the 9/11 World Trade Center Catastrophe.”

Goya once said, “monsters rise up when reason sleeps.”

How could a steel-framed skyscraper collapse at free-fall acceleration for more than 100 feet, especially if it was not hit by a plane?

The controlled demolition hypothesis is substantiated by the fundamental laws of Newtonian physics; it is corroborated by evidence from the crime scene; it is hypothesized by experts working in a variety of scientific fields, and it is conformable to Aristotelian logic. No other explanation is more plausible.

Philosophy will not allow us to simply let this crime vanish into oblivion. Its sheer magnitude forces every citizen to confront it with integrity. Like a gadfly ringing in the ears, philosophy bugs us to pay attention to the facts. Philosophy shows us pictures. Philosophy leaves evidence on computer screens and uses the voices of courageous souls who refuse to be intimidated. Philosophy demands that we do not remain silent about things that matter.

If the truth behind 9/11 does not matter, what does?

(George Cassidy Payne is an independent writer, social justice activist, and domestic violence counselor. He is a CityWatch contributor.) Prepped for CityWatch by Linda Abrams.