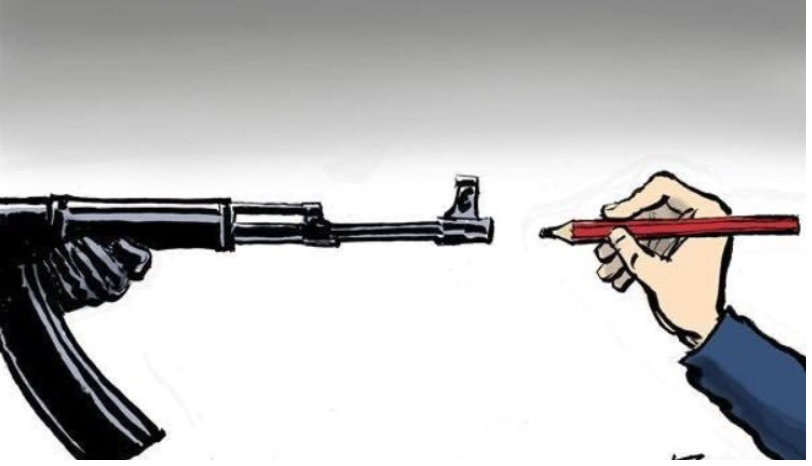 As society itself feels increasingly betrayed and cheated by corrupt courts, by politicos who promise to take away their rights, by evaporating opportunities closing off product channels to vent the mounting steam of loathing and resentment, angry men feel justified to strike out violently, murderously, often incoherently.

Far more dangerous than Trumpy-Doodle is Nancy Pelosi. The great irony is that Pelosi’s and the Dem’s incessant promotion of Identity Politics adds far more heat to the caldron of hatred than Trump’s thoughtless tweeting. Without the Dems’ continual promises that they will do away with “whitey” by 2030, when the minorities will swamp them in the polls, the buffoon’s inane encouraging of white supremacists would go nowhere. When people are not “mad as Hell and not going to take it anymore,” they have no interest in grabbing a gun to slaughter immigrants, many of whom are U.S. citizens, as we saw with the El Paso mass shooting at Walmart.

Something more serious and long-term is occurring. After Bush and the GOP were credited with the Crash of 2008, the nation swung leftward to the Politics of Hope, only to encounter the longest recession since the Great Depression. Over 90% of productivity gains went to the top 1%, while Obama set aside more courtrooms for foreclosures on the American Dream. Unlike FDR, who knew the evils which an unfettered Wall Street poses, Obama went hog-wild pro-Wall Street. The full scenario of his and Geithner’s regressive economic policies will not be apparent until the next recession hits.

Obama set up America for a rightward lurch, but no one foresaw the Mad Tweeter. The great anger of the Rust Belt would not have dislodged the Wall Street Democrats had Hillary not called the suffering Main Street working class whites (who were plagued by foreclosures and the Opioid Crisis) “Deplorables.”

We need to discern this pattern as it has played out over decades:

Steps (5), (6), (7) etc. are coming. Predicting where the winds of change will strike is no more reliable than predicting whether a hurricane will make landfall in Florida, the Carolinas, or will veer out to sea. We will surely avoid some direct hits, but only a fool thinks that means the potential for disaster has disappeared.

We know that both the GOP and the Dems are stirring up the winds of war. Group Rights eventually lead to war. Why do you think we had our first civil war?

Thus, the nation is plagued with a volatile combination–Pelosi’s constant attacks on whites and Trump’s loosening restraints on civil speech and action. The mentally ill break first and act out violently, but that does not mean mental illness is the problem. Group Rights and the fears and hatreds it engenders provoke the unstable. Worse yet, Group Rights always singles out an enemy to attack.

Ironically, we have a safety valve with presidential elections every four years. The worse times become, the earlier the nation starts the next presidential campaign. That’s why the 2020 campaign started in the wee morning hours of November 9, 2016.

From a numbers and psychology standpoint, if Trump loses, a type civil war is likely. The right wing is more violent and believes more deeply that killing people is an acceptable solution to problems. They will take a Dem victory to signify the imposition of racist Identity Politics where “white ain’t right no more.” Of course, the much-maligned dead old white men who wrote the Declaration and the U.S. Constitution set up a nation where race, religion, ethnicity would not matter in public life, but neither the right nor the left wing gives two hoots for the principles upon which the nation was actually founded.

On the other hand, if someone like Pete Buttigieg wins the election, we may escape a civil war. After all, he is white and he’s also gay–but between you, me and most sane people, gays are unwilling members of the Dem Identity Politics contingent. But the reality is that a happy, white, gay guy may be our exit from this madness. If that happens, the angry men with pens will be out of work–which will be a good thing.