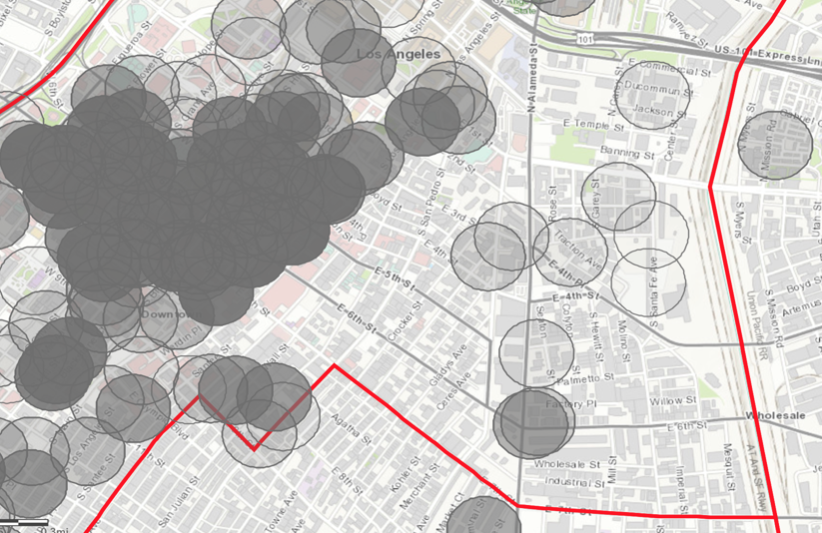 Academics, the Los Angeles Police Commission’s Office of Inspector General, and media coverage have criticized the application of these surveillance systems in Los Angeles and beyond. Markedly absent from all these appraisals, however, is the input of the communities most affected by data-driven policing tactics.

It’s no surprise, then, that Chief Michel Moore of the Los Angeles Police Department (LAPD) is deceitfully promoting the recent round of predictive policing program revisions as “location-based” and thus devoid of bias or racism. LAPD routinely denies their own history of violent policing and how land and location, in the context of Los Angeles, is always already racially fraught.

The Stop LAPD Spying Coalition, based in Skid Row, continually engages in anonymized focus groups to learn from community experience with law enforcement. These convenings re-affirm the knowledge that LAPD racially targets and criminalizes entire communities under the guise of “tactical” programs: “[W]hen you live in cities like Compton and Watts, or on the eastside like Boyle Heights, those areas are, [I] guess from their eyes, full of gang members, so the police officers are a little more aggressive, they treat everybody [like] you are a gang member until you can prove that you are not.”

To grasp the full impact of the location-based predictive policing technologies being piloted in Los Angeles, with the intent to spread and scale them globally, we have to look beyond algorithms and data — even beyond LAPD. Location-based predictive programs do not operate in a vacuum. Local histories, state and municipal codes, private industry interests, and administrative imperatives are part of this policing ecology.

In a place as violently segregated as Los Angeles, location functions as a proxy for race and class. Historically, Black, Latinx, Indigenous, and poor people have been relegated to specific neighborhoods and rendered houseless by prohibitive rents, discriminatory loans, historical redlining, and sundown laws. As a result of this “racial banishment,” Black and brown people are disproportionately impacted in their neighborhoods with intensely segregated, resource-deprived schools, a lack of healthy food options, and municipalities disproportionately invested in incarceration. Moreover, the LAPD has a clear record of racial profiling, targeting Black people in particular as demonstrated by LAPD’s own data.

The combined impact of segregation and targeting of Black, Brown, poor and unhoused people was evident in the horrific rollout of the “Safer Cities Initiative” (now RESET), a broken-windows assault on the Skid Row neighborhood⁠ — roughly 50 city blocks of LA’s greater downtown area containing one of the largest unhoused communities in the United States. Over half of this community was arrested in a single year for minor infractions like “jaywalking, drinking in public, and sleeping on the sidewalk.”

Just as location-based predictive policing emerges from a historical context of segregation and racialized targeting, it also operates within a current political context. In the 2018 State of the City Address, Los Angeles Mayor Eric Garcetti advocated for “predictive crime-fighting strategies” as a tool to protect valued property. The Stop LAPD Spying Coalition analyzed LAPD Central Division’s Predpol mission sheets from June through December 2015 and March through June 2018, and found that the distribution of Predpol hotspots effectively quarantined Skid Row from the rapidly gentrifying downtown area. The Garcetti administration continues to court developers while it criminalizes homelessness through no-sitting ordinances, bans on vehicular dwelling, diminished housing support, and refusing access to toilets and water. Have Garcetti’s predictive policing strategies protected residents, or have they worked to monitor and banish marginalized individuals from land deemed highly valuable for development?

Now that the first wave of predictive policing strategies has been added to the long list of debunked and failed LAPD programs, the LAPD, alongside departments nation-wide, are popularizing a new mode of policing — “precision policing” — that also attempts to sidestep charges of racial bias by targeting “place” and not “people.” The myth of an early modern police force fixing “disorder” — potholes and overturned lampposts — is intentionally invoked, giving police license to again displace and incarcerate people in the name of improving infrastructure.

Even if we grant technologists the miraculous capacity to overcome historic bias with math, we still have to ask ourselves a fundamental question about location-based policing: should we grant LAPD stewardship over land in Los Angeles? Much like policed communities, policed landscapes are marked by the memory of what happens when a city’s land is presided over by police. Tracts of land are deemed “criminal,” inciting vicious feedback loops of punitive zoning regulation and environmental racism. Public space is engineered to facilitate police control over civic life. Public housing complexes are stripped bare of trees and foliage — referred to as “security landscaping” — to enhance surveillance capacities. Neither land nor people are allowed to breathe in the hands of the police. It’s time for the City of Los Angeles to stop the violent practices of policing race and poverty with pseudoscience and technology.

*  For further information, questions, and comments, the Stop LAPD Spying Coalition can be reached at https://stoplapdspying.org  or  [email protected].