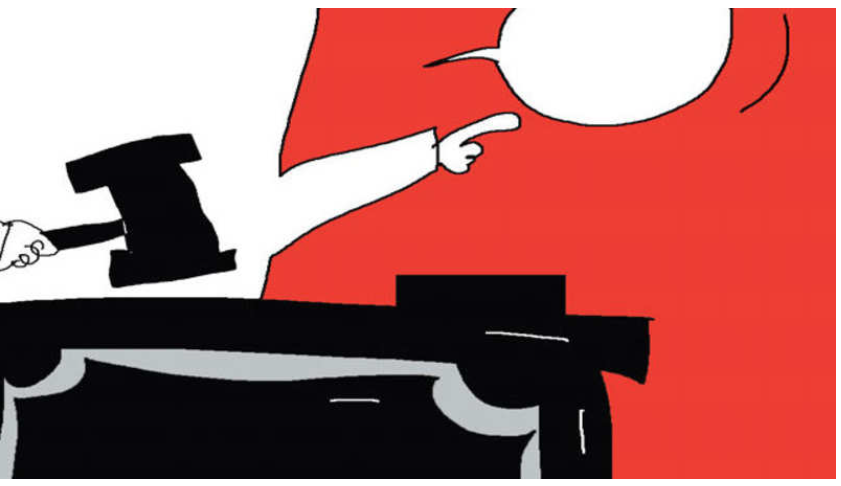 @THE GUSS REPORT-Last week, in case number 19STSC02923, Los Angeles Superior Court Judge Ray Santana ordered the City of Los Angeles to pay this columnist $2,000 for the LAPD’s continual abuses of my 1st Amendment rights, fraud, breach of contract and denial of due process rights as I pursue stories about corruption and failure in local government.

Part of what may have tipped the case in my favor was perjured court documents filed by LAPD officers Tracy Banuelos and Brian Hun, who swore under penalty of perjury on June 10, 2019, that their documents were truthful and placed in the mail on that date. But as this click-through shows, stamps throughout the document prove it was still in their possession on June 17 and June 18, and was not mailed until June 24, as proven by the post mark date on the LAPD envelope.

As I pointed out to the judge, falsus in uno, falsus in omnibus, or when a witness lies about one thing, you can conclude they lie about everything.

As a result of their misconduct, an LAPD Inspector General complaint, and a USPS mail fraud complaint, has been opened against Banuelos and Hun, while an ongoing State Bar of California complaint against Bislig has been updated to include his deliberate and reckless mishandling of my personal information. That, and Bislig’s failure to remedy it despite written assurances that he would, now appear headed toward another lawsuit against the City.

The case dates back to 2017 when, within hours of this column’s first article about the bigamy, fraud and perjury by LA City Councilmember Curren D. Price (a story broken here with allegations which turned out to be spot-on and truthful), I was repeatedly threatened with arrest by LAPD Captain Patricia Sandoval, among others, including an aggressive incident caught on camera, as I refused to give her back the LAPD’s duly issued, lawfully used press pass without a due process hearing. Sandoval was later transferred, it is believed, because of that confrontation and, ironically, an unrelated racism-based lawsuit filed against the LAPD’s Media Relations Department, which Sandoval oversaw at that time.

The LAPD’s threats continued for nearly two years. The city had claimed the pass was issued improperly, but that was debunked with documents showing that requirements for it were met, but that Sandoval refused to accept them.

Further debunking Banuelos’s testimony, on March 1, 2019, LAPD spokesperson Josh Rubenstein told me that LAPD Chief Michel Moore directly approved the issuance of a new pass to me based on those same documents and policies, which Banuelos said under oath in court was untrue, though she could not explain why the new pass had been issued based on the same exact criteria.

The LA City Attorney’s office, namely Mr. Bislig, repeatedly tried to intimidate me with threats to countersue for the City’s defense expenses, but like most of his claims, it was an empty threat. It is believed that City Attorney Mike Feuer did not want me to publish how much money his office squandered on the case, which I would have done.

City officials have not indicated whether they plan to appeal Judge Santana’s ruling. While it is estimated that the City Attorney spent tens of thousands of dollars to fight the suit (kicking and screaming against my subpoenas), an appeal of the verdict is likely to be far costlier to taxpayers than the City may realize.

Still, part of me smiles and hopes that the City does appeal because there’s additional material that wasn’t entered into evidence last week which could result in a larger verdict as it further debunks on-the-record claims made by Banuelos and Bislig, in particular.

Also, a retrial verdict would not be appealable by the City.

The case didn’t lack levity. After the judge ordered the City’s witnesses out of the court room during the hearing at my request, Mr. Bislig snuck back in. When I pointed this out to the judge, he asked Bislig to identify himself.

“I’m a Deputy City Attorney,” the five-year Loyola Law School graduate said, to which the judge retorted, “Yes, and we are very impressed. But what’s your name?”

The bigger issue is that the LAPD now has an even worse credibility problem than before. In future police cases and lawsuits, sworn declarations by officers may get closer scrutiny from activists and attorneys.

The bottom line: the LAPD has been found culpable of continually violating this columnist’s 1st Amendment rights by threatening my freedom, finances and voice while I expose corruption, failure and cover-ups by local politicians and government agencies.

If the City of LA keeps going down this path of personal destruction or retaliates with ongoing harassment or new rules to further block, exclude or inhibit my efforts, it may find itself sued on a bigger and costlier stage. The City refused numerous offers to resolve this case out of the public eye.  Before the hearing, Ms. Banuelos refused mediation, but later told me during the discovery process, “I have been through a lot of these cases and yours is by far the best-organized I have ever seen.”

If the City doesn’t appeal, its silence is an overdue acknowledgement of LAPD thuggery gamed to protect corrupt politicians who oversee their salaries, benefits and workplace conditions by attempting to silence and harass their critics.

The $2,000 is a relatively small sum. But the LAPD’s culpability speaks loudest.