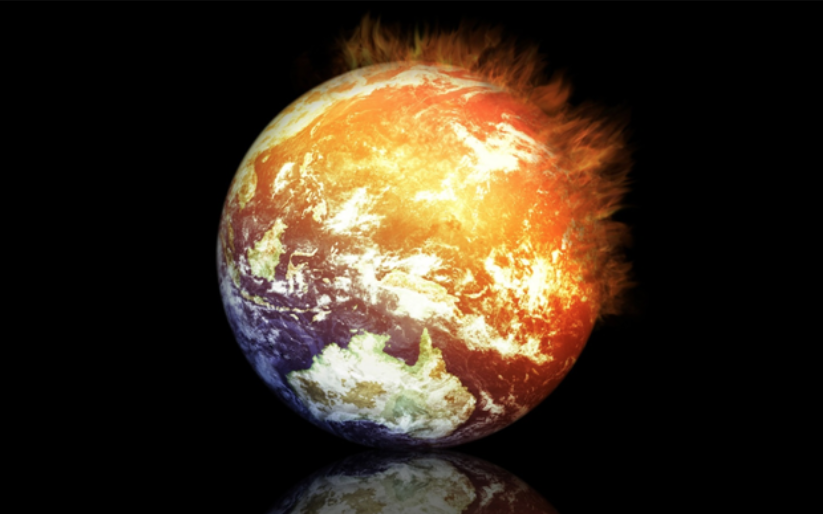 Their concern was qualified “… if greenhouse gases do not slow down, then expect a 4C Earth by 2055.” Of course, that would be catastrophic, and one can only assume those scientists must have recognized real risks. Otherwise, why address the issue of 4C by 2055 in the first place?

Not only that but the Intergovernmental Panel on Climate Change, AR4 (2007) addressed the 4C issue and a 2009 International Climate Conference at Oxford, “4 Degrees and Beyond,” discussed the consequences at length, citing how there could be deserts in southern Europe, sea levels up 2 meters by 2100, the unleashing of a “carbon time bomb” in the Arctic, with half of the world uninhabitable, etc.

Well, well, well . . . now that greenhouse gas emissions have sped up by 60% since 2010 -- and not slowed down for a minute -- the IPCC is talking about holding global average temps to 2.0C, preferably 1.5C, and they say the world has 12 years to tackle global warming (actually, nowadays it’s “global heating” due to massive heat intensity in certain regions of the planet) or all bets are off.

Because prominent scientists addressed the issue of a 4C planet and because climate scientists in general are constantly apologizing for being too conservative -- too timid in their forecasts while actual climate change is burying their predictions with a dagger to the heart -- it is a worthwhile exercise to look at a 4C world. It could happen within current lifetimes just like the scientists speculated 10 years ago. Of course, nobody knows for sure. But it helps to brace oneself ahead of time, just in case.

In all, based on how conservatively low scientists’ predictions have been for so long, maybe 4C is realistic by 2055. But beware: if it happens, infernal regions of the planet will consume vast swaths of ecosystems and life forms like a monster rising from the darkest of caves.

Fortunately, this article is a fictional tale of what 4C would look like based on predictions by prominent scientists 10 years ago. And, even though it may be considered heresy to suggest 4C within current lifetimes, who knows? Maybe those same scientists no longer believe 4C could happen by 2055, but with GHGs zooming up, it would appear kind of inconsistent not to believe it any longer.

In 2010, the prestigious Met Office Hadley Centre/UK said average temperatures would likely be 4C above pre-industrial by 2055, “if greenhouse gas emissions (GHG) did not slow down.” Well, guess what’s happened to GHGs? Asking the question is the answer.

And, worse yet, it would bring in its wake a 16C rise in Arctic temperatures where at least twice the amount of carbon already in the atmosphere is frozen in time, waiting to be released via permafrost thawing. And, +16C would do that fast.

That’s absolutely horrible news and yet one more example of mind-blowing shock and awe inspired by the rapidity of climate change vis a vis scientists’ expectations.

The short answer has gotta be: Pandemonium reigns supreme.

According to the scientific forum, 4 Degrees Hotter: “Less than a billion people will survive.” Expect, on average, more than a million human global warming deaths every week. As such, mass graveyards stacked with bodies would become a new normal.

Prominent climate scientists were quoted in the 4 Degrees Hotter article.

According to Professor Hans Joachim Schellnhuber, one of Europe’s most eminent climate scientists, director of the Potsdam Institute, “At 4C Earth’s . . . carrying capacity estimates are below 1 billion people.”

Echoing that opinion, professor Kevin Anderson of the prestigious Tyndall Centre for Climate Change stated, “Only about 10% of the planet’s population would survive at 4C.”

A global average of 4C means land temperatures would be 5.5C-6C hotter, especially inland from coasts. The tropics would be too hot for people to live and most of the temperate regions would be desertified.

As a result, half of the planet would be uninhabitable. Populations would be driven towards the poles. Over 136 port cities, each with populations of one-half to one million, would require sea walls or translocation of nearly one-half billion people.

In Europe, new deserts would spread to Italy, Spain, Greece, and Turkey as the Sahara figuratively leaps across the Straits of Gibraltar. In Switzerland, summer would be as hot as Baghdad today. Europe’s population would be forced into a “great trek north” in order to survive.

At the time, and according to the New Scientist, in 2003: “The EPI says it is confident that the August heat wave has broken all records for heat-related deaths and says the world must cut the carbon dioxide emissions that contribute to global warming.”

But, today, that’s a bad joke with CO2 in 2003 at 378 ppm. Today it’s 410. Therefore, “must cut the carbon dioxide emissions that contribute to global warming” has been a total bust!

Temperature bands, called isotherms, will shift toward the poles faster than ecosystems can keep up. Thus, most ecosystems will collapse with breakdown of organic material, leading to ever-greater emissions of carbon that is self-perpetuating, hands-free on autopilot, defined as runaway global warming.

Paleoclimate research suggests that the last time temperatures were 4C above pre-industrial, eventually, there were no large ice-sheets on the planet. Sea levels were 65-70 meters (213-229 feet) higher than today. Yet, ice sheets take considerable time to lose mass, even when it’s really hot. Thus, the sea level rise to 2100 would likely be only a few meters. But, still, get serious; it only takes a couple of meters for unmitigated disaster to occur.

In a 4C world, temperatures would vary considerably on a worldwide basis. The Amazon, the Sahara-Sahei-Arabia region, India, and northern Australia would have higher temperatures than the average at any other place on Earth.

Already, Australia gave a recent “Preview of Hot Earth” late in the year 2018 in real time when record-breaking temperatures hit hard. More than 20,000 bats dropped dead in over two days as temps in northern Australia hit 42°C (107°F). Hundreds of thousands of bony herring, golden and silver perch and Murray cod died in Darling River because of the extreme climate. Fruit on trees cooked from the inside out. (Source: “Thousands of Australian Animals Die in Unprecedented Heatwave,” The Scientist, Jan. 17, 2019)

That happened in today’s world while average global temperatures have only reached approximately 1C above post-industrial. What if 4C becomes reality or anything above 1C, like 2C or 3C? Then, what will happen to northern Australia and other overly sensitive heat regions of the planet?

As of today, CO2 at 410 ppm has powered through the 280-ppm ceiling of the past 400,000 years like a hot knife through butter, and even more remarkably, it only took a couple hundred years to break a 400,000-year record. Hands down, that’s an all-time geologic speed record.

Thus, the human experience has turned into a vast experiment filled with unknowns because there are no comparisons throughout human history. Earthlings have shattered all records of the past 400,000 years. What happens next is a gamble.

All in all, it’s somewhat puzzling that scientists are not beating the drums about the threat of a 4C world hitting earlier than expected. Maybe they are . . . but just privately.