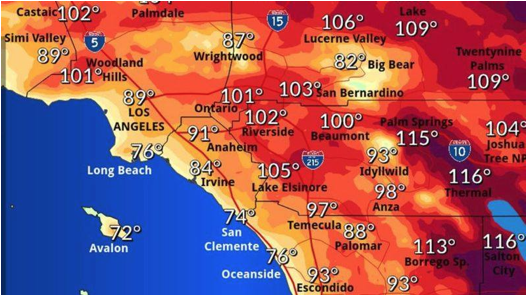 DEEGAN ON LA-Ella Fitzgerald had it right when she belted out “Too Darn Hot,” the song written by Cole Porter for his musical, “Kiss Me, Kate” in 1948.

She was bemoaning that it was too hot for loving. Today, those lyrics could mean it’s too darn hot for living -- that, with rising temperatures and melting ice caps, we are feeling and seeing more and more of the impacts of climate change.

Included in the new program is a Climate Emergency Commission to help shape the City's climate emergency mobilization implementation plan.

It will include representatives of the Gabrielino-Tongva, Fernandeho-Tataviam, and Chumash, all local tribes of indigenous peoples. These frontline and fence-line communities are among the most impacted by toxic pollution and the climate crisis.

Los Angeles is joining other cities and nations in recognizing the need for Environmental Justice, defined by the United Nations, as “justice based on inclusive and sustainable use of natural resources and the environment…creating strategies emerging across regions (Asia-Pacific, Arab States, Africa, and Latin America and Caribbean), including the integration of environmental principles in constitutions, as well as in national laws and regulations.”

Viewed globally, the UN uses several examples that hit home about the dangers of global warming to indigenous peoples, that are among the first to face the direct consequences of climate change, due to their dependence upon, and close relationship, with the environment and its resources.

Some of their examples are:

● Indigenous peoples in Africa’s Kalahari Desert face rising temperatures, dune expansion and increased wind speeds which have resulted in a loss of vegetation, and negatively impacted traditional cattle and goat farming practices.
● In the high-altitude regions of the Himalayas, glacial melts affecting hundreds of millions of rural dwellers who depend on the seasonal flow of water is resulting in more water in the short term, but less in the long run as glaciers and snow cover shrink.
● In the Amazon, the effects of climate change include deforestation and forest fragmentation and consequently, more carbon being released into the atmosphere.
● Indigenous peoples in the Arctic region depend on hunting for polar bears, walrus, seals and caribou for food security. Disappearing icecaps reduce the native habitat.
● In the Nordic countries of Finland, Norway and Sweden, rain and mild weather during the winter season often prevents reindeer from accessing lichen, which is a vital food source.

If you think “it can’t happen here” and that these are extreme examples, you’re wrong. The UN Climate Change Panel Report that was released in October 2018 stated that the planet has less than 12 years to drastically reduce its greenhouse gas (GHGs) or overshoot an already-problematic 1.5° C of global warming.

Led by Councilmember Paul Koretz (CD5) and the Leap LA Coalition, the Los Angeles City Council took the historic step of creating the new Climate Emergency Mobilization Department to fight both climate change and toxic neighborhood pollution. It also made some environmental justice history by institutionalizing the first Office of Climate Emergency Mobilization (CEMO) in any municipality in the world.

The CEMO will be tasked with creating a Climate Emergency Mobilization implementation plan designed to drastically reduce the City's greenhouse gas (GHG) and toxic pollution emissions at the speed and scale necessary to protect a safe climate via a large-scale citywide mobilization across all sectors and all neighborhoods in the city of nearly 4 million. The motion to create the CEMO was co-authored by Councilmembers Paul Koretz and Bob Blumenfield (CD3) and informed by the Leap LA Coalition.

In Los Angeles this could mean an example of providing environmental justice for affected populations that Darryl Molina Sarmiento, Executive Director, Communities for a Better Environment, says live near the fossil fuel infrastructure from the pipelines that transport crude oil to Wilmington refineries to the oil drill sites located next to homes, schools, churches, daycares, and hospitals.

There’s lots of positive action to look forward to; potentially this new Climate Czar position and department could become a building block for a future Green New Deal, as Los Angeles shows leadership in a vital area of international concern: global warming.

Can we hope that, in the UN’s 12 year window to drastically reduce GHGs, we will be replacing Ella’s “Too Darn Hot” with Frank Loesser’s 1944 tune, “Baby It’s Cold Outside”?

(Tim Deegan is a civic activist whose DEEGAN ON LA weekly column about city planning, new urbanism, the environment, and the homeless appear in CityWatch. Tim can be reached at timdeegan2015@gmail.com.) Photo: National Weather Service. Edited for CityWatch by Linda Abrams.