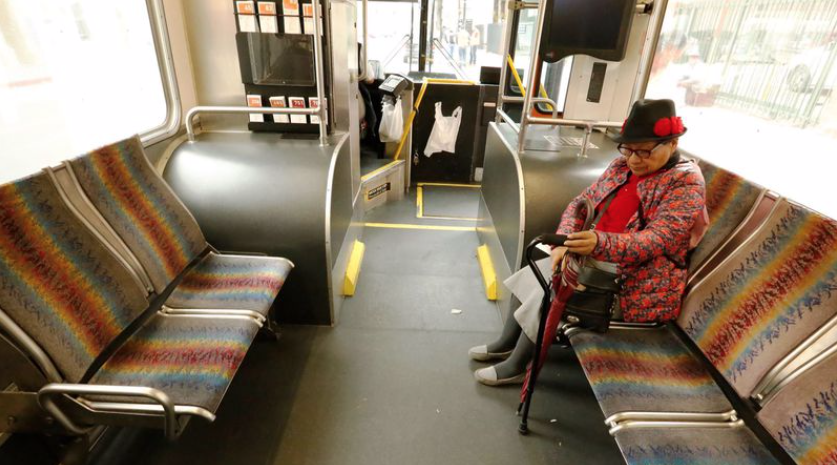 ALPERN AT LARGE--It's no secret that our society wants better, faster, and more reliable bus service.

I've always been supportive of being FOR answers, and not merely whining about problems that require fixing. Therefore, when the conundrum is mentioned about declining bus ridership, it's best not to scream and howl but to come up with new ideas, or at least revisit old ones that are overdue for implementation.

Riding the bus is a service that Metro provides, and for those of us in the know about Metro it's known that Metro is run pretty well with what they have to work with. That said, ANY and ALL service industries know that "the customer is always right" and must be treated as such.

That said, the political leadership on the Metro Board often doesn't have the guts and courage to do the right thing, and the Metro staff--from the planners to the bus drivers--take ORDERS from the Metro Board.

However, what can they or us do when their Metro Board is the same group of City and County political "woke" individuals who've given us our Homeless and Affordable Housing and Overdevelopment messes?

Too often the Metro Board has shown a political zealotry to be as tone-deaf to their constituents as they can get away with:

1) As with the homeless on our sidewalks, those sitting in their urine and feces, and those causing horrific smells and traveling environments, do NOT have the right to make their homes on the buses. This shouldn't even be an issue, but it is in our silly, childish society that ignores the rights of those who pay taxes and who want buses to be viable options.

2) Buses are too darned slow--Metro Rapid works well, and often are similar to trains with respect to having priority at stoplights and are emphasized for speed and convenience. A study launched two years ago is leading to implementation of bus lines being redesigned to better compete with driving.

3) Stop, stop, STOP making riding the bus an "obligation" for us to save the environment, save the world, stop climate change, stop Donald Trump, or whatever. Civic duty is important, but most of go and serve on Jury Duty because we have to. DO NOT MAKE RIDING THE BUS A CIVIC OBLIGATION LIKE JURY DUTY. It's a service.

4) It's been said so often that it's become old hat to suggest that Metro Board members and senior staff use the bus a minimal and even obligatory amount to best understand what bus riders have to put up with. To be clear, bus riders shouldn't have to "put up" with ANYTHING. We treat our bus riders like dirt and take them for granted. That must end.

5) Buses serve people best when--like trains--they CONVENIENTLY and ATTRACTIVELY encourage (not require!) they allow for a delightful form of mobility that would make people feel foolish to drive their own car and use Uber/Lyft. Until we focus on bus riders (and train riders) as valued customers, ridership will remain only with those who've no other choice.

With alternative Uber/Lyft, Metro Bike Share, and other first/last mile opportunities to access buses and trains becoming increasingly more prevalent, the time is NOW to revisit our buses. Abusive and mentally ill homeless individuals, gangbangers, loud and difficult troublemakers--all of them need to be shown the door and booted off our buses.

And let our police forces regularly get on and off buses to let everyone know that a safe, secure presence is the new law of the land on our buses and trains (as it should be on our sidewalks and public venues).

Let the doors close behind the troublemakers, and open for the valued customers who need affordable and convenient mobility. Make buses fast and pleasant.

Not hard to conclude, but certainly hard to implement.

After all, we DO live in a representative democracy, even for those who take a bus to get from Point A to Point B in the City and County of the Angels.