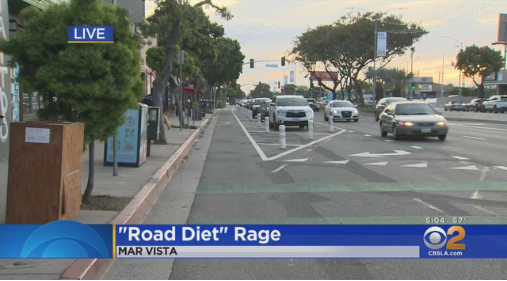 NEW GEOGRAPHY--Twenty-one businesses have closed in less than two years since the city of Los Angeles reconfigured a 0.8 stretch of Venice Boulevard in the west side’s Mar Vista neighborhood.

The city replaced one of three traffic lanes in each direction with protected bike lanes, removed some street parking, and installed physical barriers. The project is called a “road diet” and it’s part of the city’s “Vision Zero” and “Complete Streets”  programs. Officials promise the programs will reduce accidents and improve safety for all modes of transportation while boosting local businesses and reducing emissions.

It’s not working out too well, to say the least. Increasing commuters’ drive times creates economic disincentives. From the cozy patio of the Venice Grind coffee shop on Venice Boulevard, owner Demetrious Mavromichalis points in the directions of neighborhood schools. “Parents dropping their kids were a huge part of our morning rush, and they’re gone. Customers who’ve been coming in for years say they can’t afford 10 extra minutes for coffee.” He shakes his head. “I get it, obviously.” After 13 successful years Mr. Mavromichalis shuttered the shop last October.

This is Mar Vista’s Main Street, the core of a local business renaissance over the last decade. At least it was. Today it feels like a neighborhood under siege. Empty storefronts retain bright orange “Restore Venice Boulevard” signs, remnants of their owners’ last stands. Uncertainty permeates this formerly vibrant stretch.

Mar Vista is far from unique in its experience with a road diet. In July 2017 Washington, D.C. dieted a section of K Street by Waterfront Park in Georgetown. As in Mar Vista city officials  replaced traffic lanes with bike lanes and removed some street parking. At  a popular music venue called Gypsy Sally’s, known for roots and bluegrass, owner Dave Ensor notices a big drop in casual drop-ins. With nowhere to park those potential patrons now go elsewhere. He says other businesses have been similarly affected, and that the city has ignored the project’s unintended consequences: “They don’t give a damn that my wife and I invested our life’s savings in this place.”

Collin Shattuck owns Sportique Scooters on Broadway Avenue in Denver, Colorado. He calls the new bike lane on the street the “Uber lane,” because it’s mostly used by ride shares double parking to pick up and drop off passengers. He says the city provided virtually no advance notice about the plan to businesses and has stonewalled his efforts to learn more. “I’m lucky, though,” he says, “because I have a private parking lot.”

You see the same story in city after city, neighborhood after neighborhood. In New York a road diet in the Rego Park neighborhood of Queens forced local institution Ben’s Best Deli to close after 70 years of pastrami and pickles. In Seattle, a longtime business owner on a dieted street said she isn’t sure how much longer she can hold out. She refused to go on the record for fear of reprisals from the city, saying, “I’m one inspection away from being shut down as it is.”

Nor is the story limited to big cities. Matthew Schneider owns a five location chain of furniture stores called Neighborhood Home in northeast Iowa. The company’s Waverly location is on a street that was recently dieted. “It’s made a mess of our deliveries,” says Mr. Schneider. “Our truck drivers absolutely hate it.” A local restaurant owner had to double his delivery staff to mitigate the increased delivery times the road diet has caused.

Some communities are starting to fight back. In Tahlequah, Oklahoma, local business owner Angie Taylor and her husband led a successful effort to block a planned road diet on that city’s main thoroughfare. In a town of 14,736 they got 3,200 signatures on an anti-road diet petition in ten days. Mayor Jason Nichols’ support for the project contributed to his recent reelection defeat.

Earlier this year, when the New York City Department of Transportation announced a planned road diet for a 1.5 mile section of Morris Park Avenue in The Bronx, a group of small business owners sued the city. Last month they obtained a temporary restraining order preventing the project going forward until the court can hear arguments on the merits (full disclosure: I have provided legal assistance to the plaintiffs).

Some 100 businesses rely on Morris Park Avenue’s current four-lane configuration for deliveries, because vans and trucks use the right hand lanes to double park. With an estimated 600-700 deliveries to businesses daily the configuration isn’t a mere convenience, it’s a critical component of the local economy. The proposed road diet would eliminate one traffic lane in each direction and with them that lifeline. The owners of Window King, LLC told the court that the loss of the lane would destroy their business. Their suppliers refuse to have their employees carry huge panes of glass several blocks down busy sidewalks. The owners of Coquis Appliances, whose suppliers likewise won’t cart washing machines and refrigerators blocks down the street, face the same threat.

Of course, small businesses fail all the time and for myriad reasons, and correlation doesn’t prove causation. It also must be recognized that retail in general has been hammered the last few years by the “Amazon effect.” Still, the concentrations and rapidity of closures, and the consistency of stories about road diets nationwide strongly suggest the reconfigurations hurt local economies, especially mom and pop operations with already narrow margins. Cumulatively the program may even drag overall growth: Consider how many millions of cups of coffee Angelenos aren’t buying every year because they’re stuck in traffic, or the collective impact of shuttered businesses from coast to coast.

Why are policymakers from Manhattan to Fairbanks radically altering thoroughfares in the face of mounting evidence of economic harm, not to mention increased emergency response times? Do they care when local institutions like the Venice Grind and Ben’s Best Deli fail?

Officials have other motivations, many of them exercises in virtue signaling and green piety, but  some grassroots groups are beginning to organize under an umbrella group called KeeptheUSmoving. The nascent movement is uniting coastal progressives angry over the dangerous nature of projects in their communities with Midwest libertarians concerned about government overreach. In these divided, hyper-partisan times, road diets are bringing people together across the political spectrum. Hopefully they’re in time to prevent more waves of closures nationwide.

(Christopher LeGras is an attorney and journalist in Los Angeles.This piece was posted most recently at New Geography, edited by Joel Kotkin.)