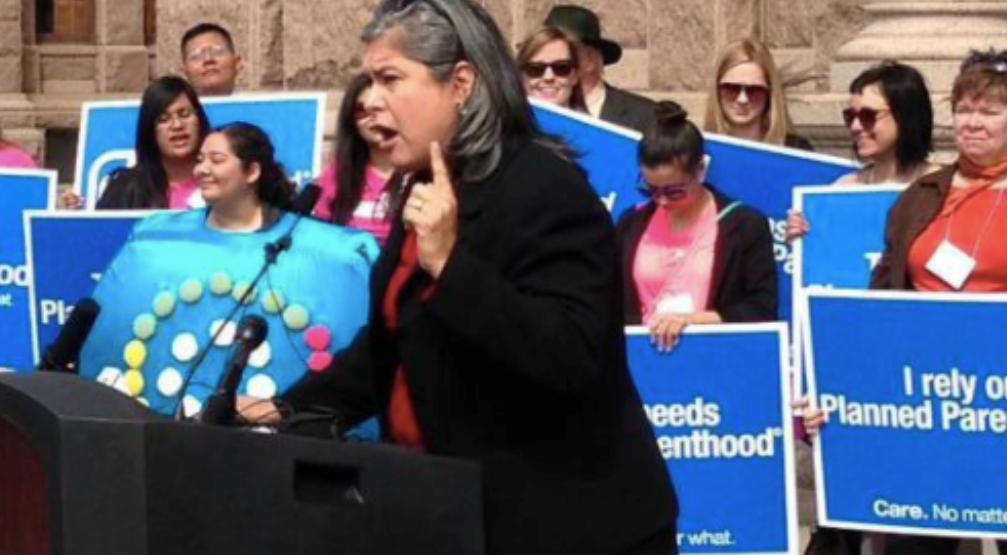 SPECIAL REPORT-Even before the formal proclamation of the #MeToo Movement in October 2017, Texas State Rep. Jessica Farrar (D-Houston) had taken a bold and unique public stand against the subjugation of women to men's rules on sexual equality and abortion.

Then, as now, a number of bills to restrict or end abortion-rights had been filed in the Republican, male-dominated Texas legislature. This caused Rep. Farrar to say she was "fed up."

On March 10, 2017, she introduced satirical House Bill 4260, to establish penalties for male "unregulated masturbatory emissions." The purpose of her "Man's Right to Know Act" was "to express the state's interest in promoting men's health," she stated.

Farrar was first elected in 1994 at the age of 27, and she is the longest serving Hispanic member from Harris County in the Texas House of Representatives. She is currently Chair of the Texas House Women’s Health Caucus.

Rep. Farrar told mysanantonio.com:  "A lot of people find the bill funny. What's not funny are the obstacles that Texas women face every day, that were placed there by legislatures making it very difficult for them to access healthcare."

The expressed intent of this bill is "to promote fully-abstinent sexual relations or occasional masturbatory emissions only inside health care and medical facilities as the healthiest way to ensure men's health."

Each emission outside a woman's vagina or created outside of a health or medical facility will be charged a $100 civil penalty and will be considered ‘an act against an unborn child and failing to preserve the sanctity of life.’

"Masturbatory emissions created in health or medical facilities will be stored for the purpose of conception for a current or future wife," it states.

HB 4260 prohibits a cause of action or award for damages based on any person's claim that their doctor refused to perform a vasectomy procedure, prescribe Viagra, perform a colonoscopy, or withheld another men's health procedure due to their personal, moralistic, or religious beliefs."

To mimic the "guilt" provision of doctors required to read, "A Woman's Right to Know" booklet to female patients prior to a trans-vaginal ultrasound, Sec. 173.003 of the proposed law compels the Department of State Health Services to create and distribute informational materials entitled, "A Man's Right to Know."

This booklet will contain scientific information regarding the requested vasectomy procedure, prescription for Viagra, or colonoscopy that must be verified and supported by research recognized as medically accurate, objective and complete by the National Institute of Health and affiliated organizations. It must also contain artistic illustrations of each procedure.

An attending physician must administer a medically-unnecessary digital rectal exam and magnetic resonance imagining of the rectum during the initial health care consultation in advance of an elective vasectomy or colonoscopy procedure or prescribing Viagra.

“No person may perform any of these procedures/services without the informed consent of the requester and without an attending physician verbally reviewing "A Man's Right to Know" with the patient before at least a 24-hour waiting period after the initial care consultation for the procedure or prescription."

The Department of State Health Services also must establish and maintain a registry of private non-profit organizations and hospitals to provide fully-abstinent-encouragement counseling, supervising physicians for masturbatory emissions, and storage for the semen, with costs absorbed by the depository.

Penalties collected will be deposited in a fund established by the Department of Family and Protective Services for the purpose of providing care and services for children in conservatorship to that Department.

Farrar filed the bill in March. On April 5, 2017,  KCCI announced it had "made its way into the hands of the Texas State Affairs Committee"...where it died.

But she didn’t intend for the bill to pass. "What I would like to see is [hat] this [will] make people stop and think," Farrar told The Texas Tribune.

WHAT'S NEXT? Does the current relentless assault on women's hard-won victories over their  reproductive rights now beg the question presented in this clip from "Legally Blond": "Can all masturbatory emissions not seeking an egg be considered 'reckless abandonment'?"