PLATKIN ON PLANNING-Traffic congestion in car-oriented Los Angeles is notoriously bad, and due to many separate decisions by City Hall, METRO, and the California State legislature, it will get worse.

The reason is that by prioritizing real estate speculation -- what the spinmeisters call “growth” -– and minimizing investment in alternative transportation modes, cascading government decisions are guaranteed to bring current congestion levels to a total crawl.

How bad is traffic congestion in Los Angeles?

In Los Angeles the average commuter trip is 52 minutes long, compared to a national average of 26 minutes.  This means that Angelinos, on average, spend twice the amount of time as most Americans in their daily trips.

Why is traffic congestion so bad and getting worse?

Changes in car ownership patterns are making traffic congestion worse, not better. When people opt for Uber or Lyft, instead of their own cars, they choose cars that are in continuous motion for 8-12 hours per day. The Uber or Lyft driver first picks you up, then drops you off, before racing to his or her next stop, often in a different neighborhood. These are not cars with one trip to work, parked all day, before zigzagging back to your residence according to Waze or similar. These cars are in motion all day long.

New car technology will not make a serious difference. Electric and hybrid cars still need roads, driveways, highways, streets, and parking lots and structures. The change in technology does not reduce traffic congestion or the need to drive. As for autonomous cars, they can, in theory, be squeezed more closely together, but they, too, still need streets, highways, driveways, and parking lots. Like electric cars, they are large land and energy consuming envelopes of steel, aluminum, glass, and plastic.  They mostly move one person in lieu of busses, subways, scooters, bicycles, and walking.

Furthermore, these car technologies generate immense profits for car companies, which plow these returns on investment back into even more alluring automobiles. For example, Toyota now has four Prius models rather than one. They have not reinvested their profits in improved bicycles or buses, but better cars, fortified by additional billions for sophisticated ads touting the joys of driving.

Under-parking new buildings by changes to the zoning code (e.g., re:code LA) does not reduce traffic congestion, although it clearly increases developers’ profits by reducing their construction costs.   Until LA’s transit system is built out, reduced parking requirements will increase local traffic congestion as shoppers, employees, and tenants circle local neighborhoods hunting for scarce on and off-street parking.

New freeway lanes, like the additions to the I-405 between West Los Angeles and the Valley, do not reduce traffic congestion since they only keep up with increased numbers of car or actually attract more cars in the mistaken belief that new lanes mean less traffic. In fact, freeway expansion induces more driving.  “Build it, and they will come.”

Density bonus programs, in particular, SB 1818 and local Transit Oriented Communities (TOD) ordinances, are an enormous hoax. While they can produce new apartment buildings, many in proximity to transit, they do not require landlords to provide tenants with transit passes (TAP cards).  As for the small percentage of affordable units in these expensive buildings, Los Angeles has zero enforcement of these units. They can and often do revert to market housing for well off tenants, including their cars, because investors and landlords are on the problematic honor system. When the construction dust settles, there is not enough affordable housing or car-owning tenants switching to transit to reduce traffic congestion.

Worst of all, Transit Oriented Development (TOD), which means expensive apartments built up to a half-mile from frequent bus lines or urban rail lines through top-down inducements, is a giant fraud.  Their premise is that more housing built near mass transit boosts transit ridership; but, in practice, Transit Oriented Development increases traffic congestion.  The reason is that Transit Oriented Development results is expensive apartments, and the small percentage of the population that can afford these sky-high rents are largely owners and drivers of cars. Their transportation behavior is totally different from the low income, transit-dependent residents who are often pushed out to create the in-fill lots that sprout new, tall, auto-centric TOD apartment buildings.

Furthermore, the decision letters contain lengthy conditions of approval, some of which are permanently attached to individual parcels through Q and related conditions. But, under SB 50, these up-zones are unconditional. Future developments on these sites become by-right projects.  They are only reviewed by the Department of Building and Safety, and they no longer include any environmental review or conditions of approval.

These SB 50 and TNP cases are just pure, unconditional up-zones. No one needs to provide a notification list of all property owners and residents within 500 feet of the zone change. Likewise, no applicant needs to provide original deed restrictions or demonstrate that a project is consistent with the General Plan, applicable Community Plan, and local Specific Plans and guidelines. Likewise, SB 50 projects will be immune from requirements that they meet criteria for:

Alternative transportation modes to lure people out of their cars are, so far, ineffective in Los Angeles, with no reason to think Santa will swoop into Los Angeles with his reindeer to fix the following: 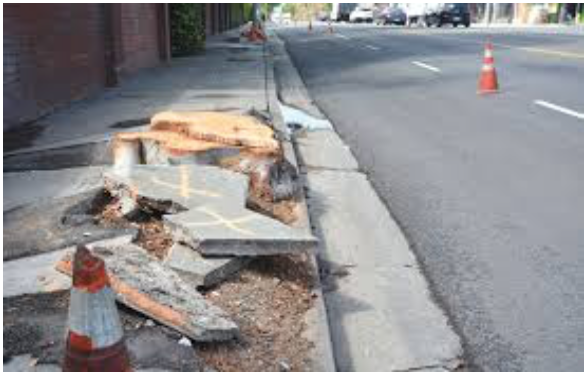 Hard to get people to walk on beat up, treeless sidewalks.

To most people the above list is overwhelming and a source of total dismay. But each factor leading to even more traffic congestion is a choice that can and should be reversed. For example, TOD programs, especially SB 50 and local Transit Neighborhood Plans, must be stopped until new housing is built for low income not high income tenants, and transit, walking, and bicycling is improved to the point that they an appealing choice for the 85 percent of Angelinos who depend on cars for mobility.

(Dick Platkin is a former Los Angeles city planner who reports on local planning controversies for CityWatch. He serves on the board of United Neighborhoods for Los Angeles (UN4LA) and invites comments and correction at [email protected].) Prepped for CityWatch by Linda Abrams.