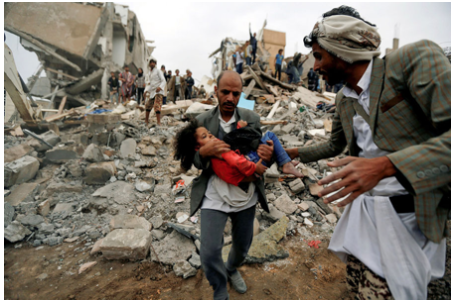 GUEST WORDS--Socially sanctioned killing is called war. The word “war” may be the most powerful word in human history, because it creates a mask of respectability for — that is, it conceals — the dehumanization and mass slaughter of a designated enemy, along with limitless environmental contamination.

When we’re “waging war,” we have given ourselves permission not to know what we are doing, even if what we’re doing is putting life on Planet Earth in danger of extinction.

Say hello to Yemen, the possible future of all of us!

“Jagged pieces of bomb flew thousands of miles per hour outward, and Rabee’a — still celebrating his success — was almost fully decapitated. The top half of his face was removed, leaving just an open lower jaw; the heat of the blast burned most of his clothes off and charred his skin, so he was left naked, his genitals exposed, his body actually smoking. Next to him, his cousin Al-Qadi, the judge, was burning alive, his blood vessels expelling water and his body inflating. He began to scream.”

These words are from an extraordinary piece of reporting by Jeffrey Stern in New York Times Magazine, about a Saudi bombing raid at a water well in Yemen two years ago, in which 31 people may have died, although, as he pointed out, “It’s hard to know the numbers for sure, because all that was left of many victims were very small parts, very far from one another.”
Three of the dismembered dead were children, if that makes any difference (oh Republican congresspersons).

Also of note: The bombing run, as is hideously typical, came in two waves. The first bomb killed a few people. A second barrage of bombs rained down six hours later, after a crowd of rescuers and onlookers had gathered.

There are several unusual aspects about this story. One is its closeup, personal look at death. Sure, 50,000 Yemenis may have died in the fighting over the three-and-a-half-year course of this war, with another 85,000 dying of starvation (including lots and lots of children), and a million are on the brink of starvation or in danger of contracting cholera (the war has triggered the worst cholera outbreak in recorded history), but unfathomably large numbers like this quickly become abstract, the generic cost of war, as the media focus moves to strategy and politics.

Also unusual is that the dead the story humanizes for us weren’t killed by America’s enemy. These are our dead, you might say. While the Yemen war is being waged by Saudi Arabia, its primary ally and major weapon supplier is the United States. The bombs that dismembered several dozen Yemenis were built by Raytheon, part of the American military-industrial complex and a major supplier of jobs. Stern even visited Tucson, where Raytheon employs 10,000 people; he went to a union hall and talked to some of them. They’re good, decent people!

So what we’re left with is the grotesque paradox of high-tech mass murder, i.e., modern war, waged and supported by the well-meaning and the innocent. Sorry about the dead but, you know, jobs!

All of which leads me to another unusual occurrence, known as S.J. Res. 54: the Senate resolution that passed last week by a vote of 56 to 41 (with seven Republican senators joining all the Democrats), banning U.S. military participation in the Yemen war. Specifically, the resolution prohibits the U.S. military from providing the Saudis with aerial targeting assistance, intelligence sharing and mid-flight aerial refueling, which it is currently doing.

As lots of people have pointed out, right now this resolution is merely symbolic, because it won’t pass, or even come up for a vote, in the House. Furthermore, the resolution doesn’t address the worst aspect of U.S. involvement in this war: the sale of weapons to Saudi Arabia. Billions and billions of dollars’ worth of weapons! Bush, Obama and Trump have all salivated over the Saudi weapons gusher. The U.S. economy is — what? A starving Yemeni child without it?

That said, the Senate resolution nonetheless matters hugely (you might say, in honor of co-sponsor Bernie Sanders). For one thing, Dems gain control of the House next year and the resolution could be reintroduced. Also, according to Reuters, some of the supporters are determined to introduce legislation calling for a ban on weapons sales to the Saudis; in other words, there’s more political action to come regarding U.S. involvement in this war.

I declare, by the power vested in me as an ordinary person, that this matters . . . indeed, that this is not politics as usual or a reflection of competing selfish interests, but a sign that species evolution has gained political traction. Planet Earth cannot survive in a state of endless preparation for war against itself.

I declare that the human race is in the process of redefining itself. The last people to know about this are the powerful, the ones with the largest investment in the status quo, but even they are learning in spite of themselves.

As humanity reaches for a green existence — as it struggles to find its way back into the circle of life — it must step beyond the insanity of war. We must know that we are killing, at long last, and find within the courage to stop.

(Robert Koehler is a Chicago award-winning journalist and editor. The Koehler column is made available to CityWatch by Other Words.)