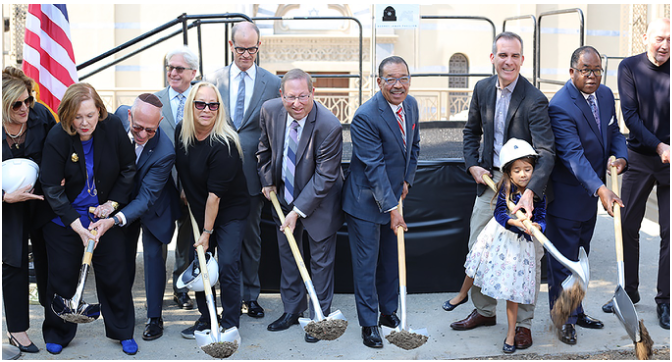 DEEGAN ON LA-The heavens may have been filled with cinematic stars, as Wilshire Boulevard Temple congregant and Metro-Goldwyn-Mayer mogul Louis B. Mayer (who also donated the temple’s east and west stained-glass windows) famously declared in his statement describing MGM as “having more stars than there are in the heavens.”

Rabbi Steve Leder, supported by philanthropist Audrey Irmas and a group of heavenly donors, can now safely say they have just added brilliance to the terrestrial firmament with their own star, the famed Dutch architect Rem Koolhaas who, with Shohei Shigematsu, designed the Audrey Irmas Pavilion (rendering below) that broke ground last week at the Wilshire Boulevard Temple. It’s Koolhaas’ first ever work in Los Angeles. This is a huge “get,” as fundraisers like to say. And a huge “get” for the city and county of Los Angeles, whose political leadership turned out in force for the ceremony. 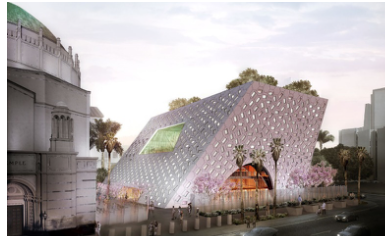 The bounty doesn’t stop there: this architectural gem which will achieve instant iconic status in LA will house a very important program in the new building. At the groundbreaking, (photo above) Rabbi Leder announced that the temple is providing space for a center/program created by the Annenberg Foundation to inspire and teach positive aging with the goal of maximizing the quality of life through a 360-degree approach to enhancing senior life: physical, mental, social, and educational.

The hope is to build a model the Annenberg Foundation can duplicate in other cities. The significance of this is not just that it’s open to all Angelenos, but that it may become the source of information and influence for the entire country. As Rabbi Leder said in his remarks from the podium announcing the project, it will be “a new way to make lives better.”

The Annenberg project (so new that doesn’t have a formal name yet) was lauded along with the Koolhaas building itself as twin stars that will shine in our city. The ceremony featured secular and non-secular speakers among the constellation of dignitaries, providing a brilliance of star power that included Chair of Senior Rabbinics Steve Leder, Philanthropist Audrey Irmas, Mayor Eric Garcetti, Architects Rem Koolhaas and Shohei Shigematsu, Building Chair and WBT President Alberto Valner, Executive Director of the Annenberg Foundation Cinny Kennard, Philanthropist Erika Glazer, Los Angeles County Supervisor Mark Ridley-Thomas, and Councilmember and City Council President Herb Wesson (CD10) who was also feted with a birthday cake and a chorus of “Happy Birthday” by the invited guests, led by the Wilshire Boulevard Temple Youth Choir under the guidance of Cantor Don Gurney and Cantor Lisa Peicott.

Now that Koolhaas and Shigematsu have arrived to make their mark in LA, who else will they be rubbing shoulders with? It will be exciting to see how everyone who loves beauty in our city will welcome their inclusion in an already impressive galaxy of architects who have left their mark on Los Angeles, where the architectural bar is set pretty high.

Architecture stargazers in LA enjoy the output of a bundle of noteworthy modern architects. Koolhaas and Shigematsu will fit in nicely with John Lautner, and R.M. Schindler, who both apprenticed for Frank Lloyd Wright, considered by many to be the master himself, an innovator of concrete block houses and a simple “prairie” style.

Lautner brought an appreciation of technical engineering to his work that resulted in what was once considered “radical,” while Schindler liked complex geometry in his forms. Schindler’s fellow Austrian expatriate Richard Neutra favored the use of a post-and-beam style and long and low intersecting planes of glass, steel and masonry. Some say that his pioneering style has influenced the greatest number of young architects over the past 70 years and continues to be the most influential today.

Frank Gehry has many fans, and many of them may find him to be more creatively influential and tied to the present and future of architecture than his predecessors, with his form bending designs created with the use of Computer-Aided Design (CAD).

By collaborating on more designs for Los Angeles, Koolhaas and Shigematsu would enter a pantheon of architectural giants who’ve influenced our city. They would be a heaven-sent addition to LA – maybe something to pray for.