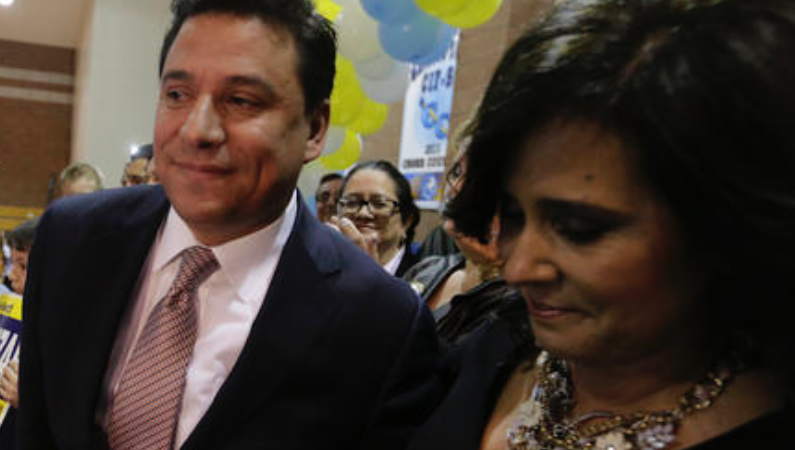 A day later, Huizar’s wife Richelle Rios Huizar, who recently announced her candidacy to replace her husband when he is termed-out, “resigned” from her appointment by Mayor Eric Garcetti to the superficial Commission on the Status of Women. (Resigned in these cases usually means that the undated, pre-signed resignation letter Garcetti appointees must submit when they are nominated was probably dated by a Garcetti staffer and accepted as an involuntary resignation.)

But what you are learning for the first time right here is this: just hours before Mr. Huizar lost those committee assignments, the FBI quietly executed another search warrant at an unsecure office tower about a mile away from City Hall because, it is rumored, of his ties to enormous sums of dubious Chinese land development money that (according LA Ethics campaign donation records) may not only be tied to Huizar, but to Garcetti and Wesson, among others.

The FBI confirmed their presence at the office tower, as did someone who works there, but who is unauthorized to speak on the subject. Thom Mrozek, a spokesperson for the U.S. Attorney’s office in Los Angeles said he was unaware of the FBI’s activity there. A text I sent to the cell phone of the FBI agent who is believed to have led the earlier raids at Huizar’s home and City Hall office did not garner a direct response from him.

And here’s another little nugget: the FBI would neither confirm the suite number in the office tower, nor did they respond when asked whether that suite’s occupant’s name was missing from the directory in the building’s un-guarded lobby. In other words, did the target(s) of the raid have a concealed occupancy in the building that is a short walking distance from City Hall?

Sources say that the potential criminal activity they believe is at the crux of the FBI’s raids may be linked to Los Angeles real estate properties developed by Oceanwide Holdings in Beijing and Shenzhen Hazens in Shenzhen, China, among others.

A while back, Wesson came under fire for appointing relatives of some of his Asian-Pacific real estate-tied campaign donors to positions of importance without necessarily having logical backgrounds for them or due to conflicts of interest, such as on the LA Ethics Commission. Keep that in-mind as this story plays out.

While veteran LA Times City Hall reporters stated on social media that Huizar was stripped of all his committee assignments, the LA City Clerk’s office indicates that as of Friday, he is still a member on the powerful but infrequently convened Board of Referred Powers committee, chaired by none other than Herb Wesson.

“Follow the money,” a source told me, “because the IRS seems to be looking into this as much as the FBI, and it may be headed for names far bigger than Jose and Richelle Huizar.”

It comes as no surprise that Huizar’s home and City Hall office were the first to be raided by the FBI.  Mayor Sam’s Scott Johnson had this exclusive about alleged real estate pay-for-play back in 2016, and in that piece, he linked to even earlier incidents in which Huizar’s “friends” needed to be satisfied before his PLUM committee would approve and forward massive real estate development projects for rubber stamping at the full City Council.

Speaking of which, with Mr. Huizar now a toxic and disenfranchised lame duck, and Mrs. Huizar having her wings clipped from Garcetti’s mostly spouses appointment, how long will it be before qualified candidates line-up to challenge Mrs. Huizar in the race for Mr. Huizar’s Council seat? Better yet: will she quit the race before the end of the year? Smart money says yes, and I will explain why in an upcoming column.