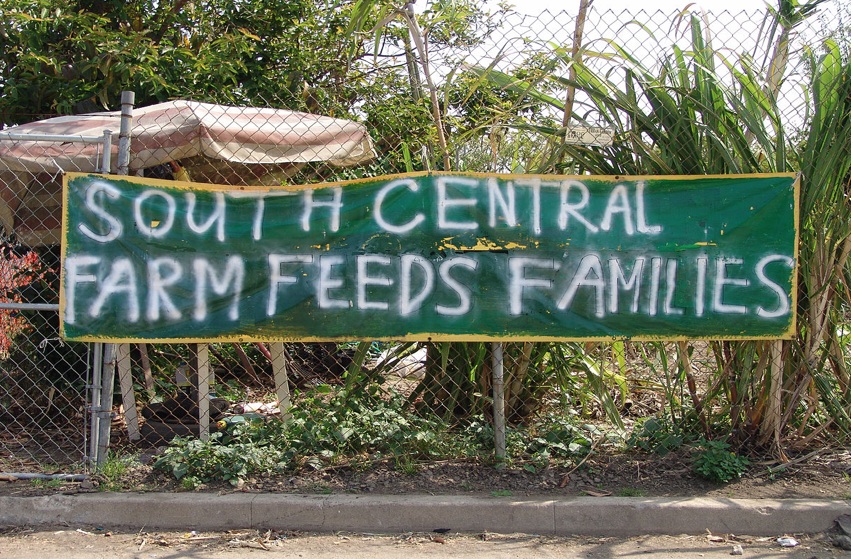 GUEST COMMENTARY--Fascinating as a David and Goliath struggle in itself - the multi-year effort to restore the South-Central Farm at 41st/Alameda in South Central Los Angeles also highlights significant development issues that could apply to all of LA.

These issues will be ruled upon in Los Angeles Superior Court on September 27th.

What is at stake on the 27th is (a) whether an already-approved project must be reconsidered by the Los Angeles City Council, if the court finds that the original Environmental Impact Report (EIR) upon which the Council’s approval was based was flawed, and the EIR ordered redone; and (b) whether or not further construction must halt until a new EIR is certified, and the project receives a new approval.

As the then-largest urban farm in the United States, the 14-acre South Central Farm was bulldozed in 2006, but has been lying mostly vacant ever since, with warehouse development proposed for the site, but never approved and built.

This will not be a minor review. In considering cumulative impacts of proposed nearby development - a requirement under the California Environmental Quality Act - the original EIR only considered five additional projects already filed with the City in the project study area, but not yet approved. CALTRANS argued the EIR should have studied 82 such projects!

Why does this matter? Because too often such background context is disregarded, and projects with detrimental environmental impacts are approved via ‘overriding’ considerations - a legal term where the legislative body decides the benefits of a project outweigh the costs.

Insufficiently considering potential cumulative impacts in this manner is one reason why traffic, congestion and air pollution in Los Angeles is so bad.

Yet in this case, PIMA is arguing that the only thing the LA City Council has to do is certify the new EIR, and that PIMA’s prior project approval should remain in place without further review.  But this would defeat the purpose of the new EIR, because it would preclude the Council from considering the proposed project within a more accurate environmental context.

- If a project hasn’t complied with all applicable environmental laws, why should the project be allowed to proceed?

- Why should neighbors be subjected to construction impacts on a project that may not turn out to be approved after the full potential environmental impacts are studied?

- Why should developers be allowed to establish ‘facts on the ground’ and influence decision-making, by their project being substantially built when it returns for final approval after mandated environmental review?

If the South-Central Farm Restoration Committee is successful in compelling the project to return to the LA City Council for renewed approvals, the Council will be faced with fundamental questions about sustainability, environmental justice and social equity - and how those goals and values play out in different regional economic development strategies.

In one strategy - the path most often taken and the one proposed for the South-Central Farm site by PIMA - new jobs are based upon a goods movement strategy that is dependent upon far-away labor for production, and far-away markets for distribution.

With two major ports in Los Angeles and Long Beach, such goods movement is certainly a fundamental part of our region’s economic future. But should it be an economic mono-culture at the expense of complementary, community empowerment-based strategies?

Even though the Farm was located on land zoned for industrial uses, it was also located immediately across the street from a residential neighborhood. As the nation’s largest urban farm, it provided 14 acres of local open green space, fed hundreds families from the surrounding neighborhoods on a regular basis, and provided local economic reliance and food security for the community- objectives specifically called out for this part of Los Angeles in Chapter 6 of the City’s Open Space Elementof its General Plan.

In considering what is best for this site, the LA City Council cannot ignore that history, because unlike the rest of nearby Los Angeles, this large 14-acre site remains unpaved and undeveloped. And at the same time, foundations and supporters have been and remain ready to pledge funds to purchase the parcel and preserve it for the community, as a community-run, urban agriculture land trust.

Thus far, PIMA hasn’t wanted to sell and locate their warehouse project elsewhere. That’s where that legal statement of ‘overriding considerations’ in the revised EIR comes into play.

Because the background traffic and air pollution in the project study area is already so severe —and will be shown to be even more so when all 82 future projects are accounted for — the LA City Council would have to make an affirmative statement that the project’s economic benefits would still outweigh its environmental damage to approve the project.

But when there are so many benefits to restoring the Farm - social, environmental, health and economic -- and when PIMA could utilize funds from sale of the land to purchase and rehabilitate another already paved/developed site — why not determine that the economic benefits of the proposed warehouse are notworth its negative environmental impact?

Where do the neighbors stand on this issue?  Within City Council District 9, the district where the Farm site is located, all four local Neighborhood Councils (Central Alameda, South Central, Zapata King and CANNDU) are on the side of the Farm. Each is submitting Community Impact Statements as part of the public comment portion of new EIR process, stating that they oppose the project and support restoration of the Farm.

Perhaps after the revised EIR is complete, the LA City Council will follow these neighbors’ lead and ‘think globally and act locally’, to promote local food security, economic self-reliance and our public and environments health — especially now when responsible cities are beginning to plan climate change mitigation strategies, including to reduce the need for long fossil-fuel dependent supply and distribution lines.

Of course, none of this needed debate over the future of this site will occur unless Judge Chalfant rules that the proposed project must return to the full LA City Council after the new EIR is complete.  Which makes his September 27th ruling that much more important.

(Michael Feinstein is a former Santa Monica Mayor (2000-2002) and City Councilmember (1996-2004), a co-founder of the Green Party of California and a long-time South-Central Farm supporter.)