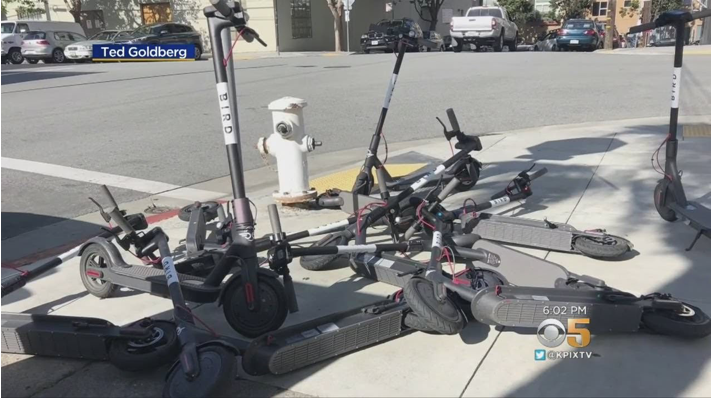 PLATKIN ON PLANNING-Fans of Bird and Lime electric scooters in the Los Angeles are already boosting them as a solution to a major barrier to increased mass transit ridership: the lack of first-last mile public improvements.

These are the vast array of amenities that make transit easily accessible and appealing.

We know what these amenities are since METRO has described them at length in two on-line documents: Transit Oriented Communities and its First-Last Mile Strategic Plan. We also know their specifics because the Department of City Planning has expertly described them in its primer, Mobility Hubs Readers Guide.

With this knowledge at hand, what prevents scooters from becoming the essential first-last mile component of mass transit? How about this list for starters?

What role for scooters in LA? Do we ban scooters altogether or figure out a way to make them part of actual first-last mile program?

The answer is simple: bicycle parking. It is a basic component of all first-last mile/Transit Oriented District programs, and they can also be used for scooters. In fact, electric scooters are already discussed in METRO’s documents, and bicycle infrastructure, including parking, is presented in detail through City Planning’s guidelines.

LA City Planning’s Mobility Hubs Guidelines also has a similar program, “2.2. BIKE PARKING:  Among the necessary supports for bicycle transportation, bike parking is both vital and relatively easy to implement.”

What then is the big deal? Scooters can use the parking places dedicated to bicycles and not clutter the sidewalks, where pedestrians walk to busses, light rail, and heavy fail. For that matter, scooters can also use existing and future bicycle lanes, so they don’t threaten pedestrians. Scooters can also share these lanes with bikers, which keeps them safe from cars.

This simple solution is not, however, so simple. While METRO and City Planning can write well and long about the extensive list of public improvements necessary to make transit succeed, they rarely implement them. The perfect example of this double-standard is the Purple Line “Transit Neighborhood Plan” (TNP) I have ridiculed in recent CityWatch columns. It does not include any facilities for bicycles, which means that there is no place for scooters to park. This proposaldoes not add any bicycle lanes for the new subway stations at Wilshire/LaBrea, Wilshire/Fairfax, and Wilshire/LaCienega. Likewise, it does not offer any adjacent or on-site facilities for bicycles or scooters at bus stops or subway stations.

We should not be surprised though because the Purple/Red Line has operated since 1996, and its existing stations, at Wilshire/Western, Wilshire/Normandy, and Westlake/MacArthur Park, have been treated the same way. They are also missing easily accessed bicycle facilities.

The failure to add these and any other first-last mile facilities for the Purple Line is not an oversight.  Both METRO, which builds the subway, or City Planning, which plans for the surrounding neighborhoods, have clearly detailed what ought to be done.  In fact, public improvements were included in the initial grant that METRO gave to the Department of City Planning to prepare the Purple Line “transit neighborhood plans.” According to City Council Motion 13-0747, the TNP was supposed to include pedestrian and bicycle access to the stations and surrounding neighborhoods.

But, none of this happened. As I have previously explained, the TNP is nothing more than a scheme to increase the size, height, and density of parcels zoned for commercial buildings and apartments.  The proximity of these parcels to mass transit is a cover story to justify their free and highly profitable up-zoning ordinances.

This real estate scam has no need to fund programs that create Transit Oriented Districts or build first-last mile facilities. No bicycle lanes, especially safe grade-separated ones, are added.  No bicycle parking is constructed. No drought tolerant shade trees or other landscaping is funded to establish a pleasant walking environment.  No sidewalks will be widened and re-paved. No ADA curb cuts or related pedestrian improvements are underway. No additional streetlights are in the “plan.” No street furniture is on order, nor is any way-faring signage proposed.

Most importantly, there are no proposals to make bus or subway rides more appealing to local residents. There will be no mandatory TAP cards for tenants and residents. No fare reductions, which have previously increased ridership, are called for. No shorter headways are under way. No real time apps are being unveiled. No bus shelters are proposed. No electronic signage for bus arrival times is being installed.

The bottom line is there for all to see.  Both METRO and City Planning are ignoring their own policies and programs in building the Purple Line subway and improving feeder bus lines.  In sharp contrast, their alternative approach rests on two basic components:

Will METRO’s/City Planning’s real estate approach work?It depends what you mean by “work.”  The upzoning will definitely increase the value of properties zoned for commercial and apartment uses.  Property owners will obtain a financial windfall, so they will surely benefit. In those infrequent cases where they construct new commercial, residential, or mixed-use buildings, well off tenants will do fine. Their expensive apartments and offices will be near major employment centers, museums, shopping centers, boutiques and galleries, Whole Foods and Trader Joes, food courts and restaurants, and a major medical center.

As for transit ridership, the upzoning will be a one-way trip. When new buildings appear, the City of LA will never monitor them to see if employees and residents use transit. No up-zoning will be reversed or building permits revoked when these buildings predictably fill up with car/Uber/Lyft drivers and passengers.

This is why I have previously called the TNP a real estate scam dressed up in a see-through garment of “increasing transit use.” It also why I have written that it – and its environmental review -- should be shelved until they can become part of the transportation, landscaping, urban design, and land use analysis, policies, and implementing programs of the Wilshire Community Plan update.

(Dick Platkin is a former LA city planner who reports on local planning controversies for CityWatch.  Please send any comments, questions, or corrections to [email protected].) Prepped for CityWatch by Linda Abrams.