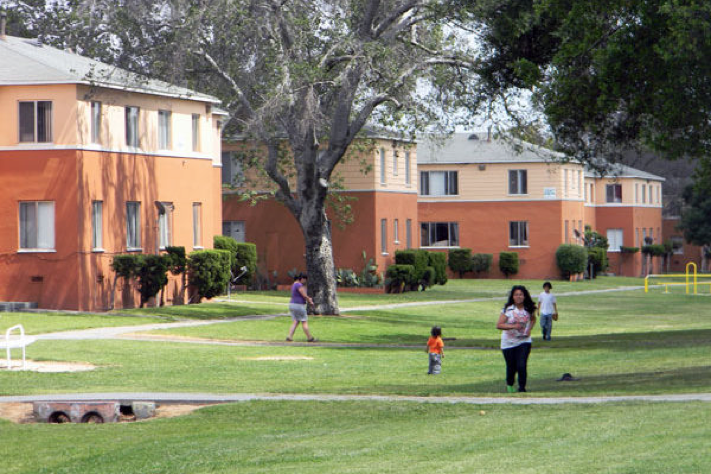 THE GENTRIFIERS--The Miami-based developer that owns Wyvernwood Apartments has secured a $155 million loan to refinance the 1,175-unit complex it plans to raze and rebuild in Boyle Heights.

According to the business website, The Commercial Observer, the five-year interest-only loan is being provided to The Fifteen Group by UBS, a Swiss multinational investment bank. The mortgage-backed securities financing – or CMBS loan – is the largest deal of the year for UBS, which valued the complex at $205 million.

The Commercial Observer reported that the loan refinances $111.4 million in outstanding debt and will allow the developer to cash out $41.1 million in equity. It is unclear if the loan advances The Fifteen Group’s redevelopment plans for Wyvernwood.

Led by co-founder and principal Mark Sanders, The Fifteen Group acquired the historic apartment complex in 1998. In 2007 the group said it planned to convert the “1930s era-complex into a 21st century, sustainable community that increases the amount of rental and for-sale housing, retail, office, and commercial space in Boyle Heights.”

The plan called “for redeveloping the 70-acre site to include 4,400 residential units, 300,000 square feet of retail, office, and commercial space as well as nine acres of publicly accessible open space.” The plan would include affordable and market-rate apartments, plus Senior housing. Construction was slated to commence as early as 2010 and take up to 10 years to complete what was proposed as a $2 billion project.

But The Fifteen Group’s plan was met by resistance from residents who fear they would be displaced by the development, and little or nothing has been heard from the developer in recent years.

The report published by the online site on Tuesday offers some new information culled from data obtained by the agency that provided credit ratings for the deal. Highlights include:

Built in 1939, Wyvernwood is known as a prime example of a “garden apartments” complex and is a registered landmark in the California Register of Historical Resources. The Los Angeles Conservancy has joined residents who support preserving the apartments.

But backers of the Fifteen Group’s proposal say the project will bring new jobs and add much needed housing to the neighborhood.

(Alex Medina is a senior at Francisco Bravo Medical Magnet High School. He is an avid runner and activist for the LGBTQA+ and Latinx communities. He will be attending Hamilton College in Central New York as an English and Hispanic Studies Major. You can find Alex on instagram @alexmedinagreen. Edited for CityWatch by Linda Abrams.