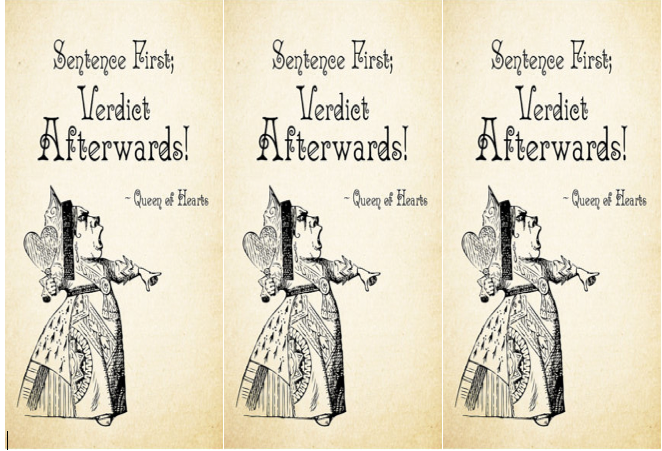 Furthermore, this imminent revelation is not the culmination of an extensive community-driven planning effort to update the Wilshire Community Plan. This massive makeover is totally disconnected from the Mayor’s, City Council’s, Director of Planning’s mandate for an accelerated six-year processto update LA’s 35 Community Plans and its citywide General Plan element. That would be great and long overdue. But, the update of the Wilshire Community Plan is only scheduled to begin in 2021.  Nevertheless, this current makeover for the western half of the Community Plan area will include many parcel-specific but unknown up-zoning and up-planning ordinances. It will in effect, implement a Community Plan that does not yet exist. The Queen of Hearts could not be happier.

To better understand what is happening, we need to make a deep dive into LA’s haphazard planning history. The City Council adopted the existing Wilshire Community Plan in 2001, based on 11-year-old 1990 population data. That legally adopted plan – which is still in full force -- does not call for its western half, from Rimpau of the east to Beverly Hills on the West, from Beverly on the north to Pico on the south, to be lopped off and then immediately re-planned and re-zoned to foster new, tall, high density, high-end commercial and residential buildings.

Likewise, City Planning’s own directives for updating LA’s 35 Community Plans are clear they should be completed in conjunction with updates to LA’s aging citywide General Plan elements. After all, good planning, based on carefully crafted State laws and guidelines, requires a broad, comprehensive, community-driven understanding of an entire a city before reinventing specific local neighborhoods.

This was reiterated by Director of Planning, Vince Bertoni, in a lengthy interview in The Planning Report:

“Having thoughtful interaction and consensus before adopting our General Plan and community plan updates, and then really keeping them up-to-date, will create faith in the plans, encourage people to follow them, and give them lasting meaning.”

The downside of this stealth planning “process:” The Director of Planning’s own words do not mean their opposite. He did not call on his planners to arbitrarily, preemptively, and secretly carve out sections of a Community Plan for broad upzoning before updating the General Plan’s citywide elements, without extensive interactions and consensus among all local players, and without the slightest consideration of an area’s run-down and already failing infrastructure.

This makeover’s real thrust is real estate speculation. It is driven by the other-worldly belief that if City Hall aggressively promotes private greed, investors will flock to LA and build profit-driven private projects that will quickly end – not compound -- LA’s multiple transportation, housing and homelessness, infrastructure, and climate crises.

Based on the concept documents that City Planning has so far made public, this vast private sector makeover will minimally consist of taller, larger, denser buildings on all commercial corridors between Third and Beverly in the north, Pico in the south, Rimpau on the east, and Beverly Hills on the west. This makeover, in fact, is so extensive that it will require amendments to the Wilshire Community Plan’s maps, policies, and programs; amendments to the General Plan Framework and other General Plan elements, and many new City Council-adopted ordinances to up-zoning hundreds to thousands of parcels.

The makeover also depends on the City Council adopting unknown zoning overlay ordinances for portions of this large plan area. It will also, for the first time, call on City Planning to implement the new and incomplete re:code LA zones for a large planning area.

As for the time frame, this process takes place three years before the Wilshire Community Plan begins its formal update, and six years minimum before the City Council adopts this update.

Since planning projects of this magnitude should be -- and historically have been -- prepared through extensive outreach to City Council Offices, homeowner and resident associations, tenant groups, civic organizations, and neighborhood councils, and since they evolve through many publicly distributed drafts, don’t be surprised if you did not know that this stealth makeover was in the works.  Even a veteran planning professional like me, who closely follows planning developments in LA, especially in my own Beverly Grove/Fairfax neighborhood, was blindsided by this proposal. In fact, I have checked with every local planning activist I know, and only found one person, not even City Council Planning Deputies, who knew that City Planning was dropping this bomb.

Furthermore, like other local people, I was taken aback when I read about the purpose of the public meeting. It is to initiate an Environmental Impact Report for an enormous up-zoning, up-planning Community Plan Update that remains secret. That’s right, a series of requests to review this “plan” before its unveiling at Thursday’s public meeting were rejected by the Department of City Planning and Council District 5. To be fair, however, the Council office, like the local residents who will bear the brunt of this plan, claimed it was also out of the loop, but nevertheless defended City Planning’s stealth approach.

Apparently, City Planning so skillfully flew under the radar that even local elected officials remained clueless about a broad makeover of a major chunk of their Council District(s). Likewise, the Mid-City West Neighborhood Council, the Pico Neighborhood Council, the Beverly Wilshire Homes Association, the Miracle Mile Residents Association, and the Carthay Circle neighborhood groups were also unaware of these far-reaching proposals to up-zone and up-plan their neighborhoods.

The Downsides of This Makeover. But, other than these truly troubling top-down process issues, we need to ask if there is any downside to a Transit Neighborhood Plan that extensively up-zones and up-plans a large swath of LA’s mid-city area. My answer is an emphatic yes and let me list why this proposal – at least what we know about it – is so bad.

Enormous financial gift to property owners.This is a Neighborhood Transit Plan. Its ostensible purpose is to methodically plan for the Purple Line Subway Extension, which opens in 2023. To do this, the plan increases the height, mass, and residential density of thousands of parcels in a large study area. These free land use changes will substantially increase the market value of these parcels, and property owners will receive an enormous economic windfall. Once they sell an interest in their properties, they will receive much more money than before the up-zoning.

Good for them, but bad for the City of LA, which does not recoup any of this massive wealth transfer, even though this money could play a vital role in addressing the many impacts of these large, new, energy-intensive, auto-centric buildings. The funds that LA needs to repair damaged streets, build bicycle lanes, plant boulevard trees, upgrade street lighting, construct new pocket parks, widen sidewalks, install ADA curb cuts, construct station area parking lots, build station-site interfaces for buses and ubers, provide transit users such basic amenities as bathrooms, and slash bus and subway fares won’t be there.

Developers’ costs will require expensive projects.The increased value of these properties also means that that investors’ land acquisition costs will soar. Investors, who expect an impressive 15 to 20 percent return on new real estate ventures, will have no choice but to charge high rents for their retail space, store fronts, offices, restaurant, and apartments. This plan will absolutely not create affordable housing.Based on comparable apartments, the new housing will be expensive, in the range of $2,500/month minimum for a small apartment, and up to $8,000 - $10,000 per month for a two-bedroom unit. These high rents will, in turn, pull up rents for nearby existing commercial and residential units. As a result, this “plan” will accelerate the ongoing gentrification process in these older neighborhoods. It will then force more local people into overcrowded apartments. They will be the lucky ones, though, since the unlucky will end up sleeping on the streets or in their cars.

Greater traffic congestion.The streets in the Fairfax, Miracle Mile-Museum Row, Restaurant Row, LaBrea Corridor, and Pico/San Vicente areas are already at level F, which means total gridlock. If you think the areas near The Grove, Farmers Market, Beverly Center, Beverly Connection, Cedars-Sinai, Museum Row, and Restaurant Row are already impassible, “you ain’t seen nothing yet.” This plan will make traffic conditions much worse.

The claim that the new residents, shoppers, visitors, and employees will give up their cars for busses or the new subway is not credible. Expensive buildings require well-off people, who, in Los Angeles, are the least likely demographic to jettison their cars for busses and subways. It is not by accident that the Beverly Center, Beverly Connection, The Grove, Cedars-Sinai, the Farmers Market, and LACMA have enormous parking structures. These facilities know that Metro’s busses on LaCienega, Wilshire, and Fairfax only serve a small percentage of the people who live in, work in, or visit these regional centers. They also know that a Wilshire Boulevard Subway will not change these transportation behaviors.

Already taxed infrastructure.The public infrastructure and services in these popular, older neighborhoods, like the rest of Los Angeles, are not capable of supporting new car and energy-intensive buildings. Every heat wave now produces electric blackouts in this Purple Line Extension study area. In a recent heat wave, for example, some locals went 72 hours without power. This is the new normal in LA before the induced growth of this upzoning proposal. If adopted, the makeover will stretch LA’s already overloaded electrical grid to its breaking point. Furthermore, the study area’s Hancock Park and Crescent Heights Elementary Schools are already at capacity, and a residential building boom will not include its own educational system. As for water mains and sewage lines, the City’s repair crews already have a full work program either patching up broken lines over this entire century old area or replacing 90-year-old conduits as they, too, begin to fail.

Mythical population boom.Another premise for induced growth plans, like this, is that LA is on the verge of a population boom. But, there is no data to bear this perpetual prophesy out. The current Wilshire Community Plan predicted that the plan area would reach 337,000 people in 2010. But this forecast turned out to be a total sham. The 2010 census only found 278,000 people. At current growth rates, of about 900 new residents per year, the 2010 figure will only be reached in the year 2055, 45 years after City Planning’s population forecast. They might have been more accurate had they gone to a fortune teller or bought their own crystal ball!

Extensive untapped zoning capacity.The claim that the study area’s existing zoning is inadequate to meet LA’s need for housing – the foundational myth that propels this plan – is totally baseless.  Even if the study area’s population exceeds forecast levels, this area’s commercial corridors already permit large apartment houses. Through existing density bonus programs, these mixed use or residential buildings could minimally be built to five stories. The Beverly Fairfax, LaBrea, Restaurant Row, Miracle Mile, and Pico/San Vicente neighborhoods already sit on an enormous reservoir of untapped residential zoning capacity. Unlike the area’s collapsing infrastructure and stretched public services, it is sufficient to accommodate all future growth scenarios.

Future columns will examine the Proposed Neighborhood Transit Plan in detail, making the case that it should be folded into the 2021-2024 update of the Wilshire Community Plan, not adopted years in advance.

In closing, let us reread a choice quote from Lewis Carroll’s Alice in Wonderland.It perfectly describes a corrupt planning process in which a Community Plan is implemented through up-zoning before City Planning drafts and publicly circulates it to all local groups.

"Let the jury consider their verdict," the King said, for about the twentieth time that day. "No, no!" said the Queen. "Sentence first–verdict afterward."
"Stuff and nonsense!" said Alice loudly. "The idea of having the sentence first!"

(Dick Platkin is a former Los Angeles City Planner who reports on local planning controversies for CityWatchLA. He welcomes comments and corrections at rhplatkin@gmail.com.) Prepped for CityWatch by Linda Abrams.