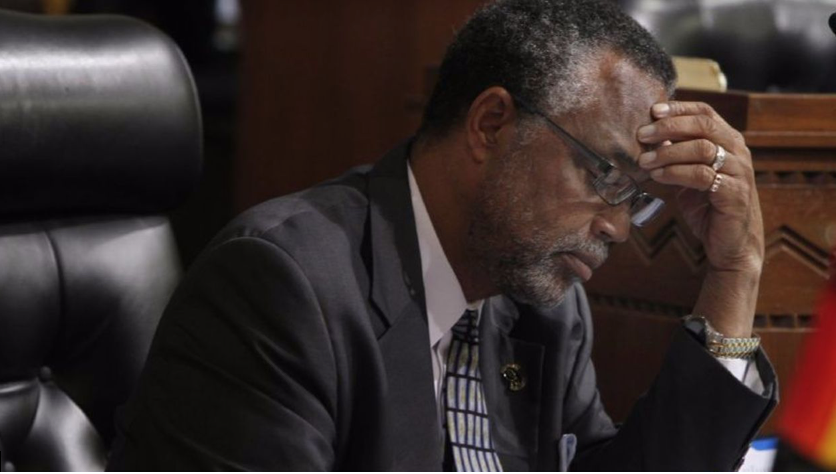 @THE GUSS REPORT-Alone at last. Despite his continual denials of bigamy, Los Angeles City Councilmember Curren D. Price, Jr., now appears, for the first time in many years, to be married to just one woman, his second wife Delbra Richardson Price, a successful LA real estate professional with deep ties to local governments.

But like a row of tumbling dominoes, his divorce settlement is now expected to create a series of new problems for the long-time politician.

On February 8, 2018, Mr. Price was finally granted a long-sought divorce from his first wife, Lynn Suzette Price, a self-employed Trenton, New Jersey, attorney to whom he had been married since August 1, 1981. Somewhere in-between those two dates, Mr. Price married his second wife although he refuses to state on what date they were married, citing an unsubstantiated claim of identity theft.

While that part of the story, which I broke in CityWatchin February of last year (see articles linked below) is still being investigated by the Los Angeles County District Attorney’s office, along with allegedly related identity theft, fraud and perjury by someone close to Mr. Price, a fresh heap of trouble is about to arrive on his doorstep.

Over the past 18 months, Mr. Price and myriad surrogates, including attorneys, campaign staffers and some of his taxpayer-funded LA City Council staff, repeatedly denied that Mr. Price was a bigamist.

But it was all a blatant series of lies, because while Mr. Price continually denied the bigamy allegation in the media, he simultaneously shopped for and eventually hired – wait for it – a divorce attorney, which you would only do if you have an extra spouse to suddenly jettison.

According to court records, that divorce attorney, Sven Buncher, officially took over Mr. Price’s case on March 23, 2017, even though he and his surrogates kept denying that he was married to Lynn Suzette Price.

Now, the divorce settlement proves that Mr. Price was simultaneously married to both Delbra Richardson Price and Lynn Suzette Price (who still uses his surname in her law practice and on her New Jersey voter registration) for an undetermined number of years.

This is problematic for him because it means that most, if not every, tax return, and officeholder ethics form, including his Statements of Economic Interest, were, to describe it delicately, inaccurate because they would not have included the income and assets of his wives, plural.

Each of those tax returns and ethics forms was signed under the penalty of perjury. Mr. Price’s votes during those years of incorrect declarations should now be investigated for conflicts by California Attorney General Xavier Becerra. (Shortly after my first few columns on the subject, Mr. Price hastily changed some of his City of LA ethics forms. But why would he do that, since he publicly kept denying he was married to more than one woman?)

In Mr. Price’s earlier unsuccessful pursuits of a divorce from Lynn Suzette Price, he and his lawyer disingenuously claimed in sworn court declarations that she could not be located for the purpose of serving her with divorce papers, when in fact she was openly practicing law in Trenton, with a website that provided a street address for her law office, and she was also registered to vote in Mercer County, New Jersey, for many years.

Further complicating matters for Mr. Price is his 1999 Chapter 7 bankruptcy, in which he listed his spouse as Lynn Suzette Price, a marital status that he kept intact when he re-opened the file in 2005 in pro per (Mr. Price has a law degree but has never held a law license) for what is believed to be an attempt to refinance property that would eventually be split in the 2018 divorce settlement. The issue here is whether Mr. Price provided completely honest information about assets in that filing. Had he not re-opened that case in 2005, those records would likely have been destroyed in the government’s mass purge of court records.

The Public Integrity Division of District Attorney Jackie Lacey’s office says that its investigation of Mr. Price is still open, but that they are unable to comment on it at this time.

And finally, there is the issue of the Los Angeles Times, whose reporter Dakota Smith asked me last year for information about the case but failed in her article to give fair credit or properly link to my original story. Has she since failed to check the court records to see that Mr. Price is now finally divorced? Or did she check it and decide that the public did not need to know?

Earlier CityWatch articles on this subject are chronologically linked here: