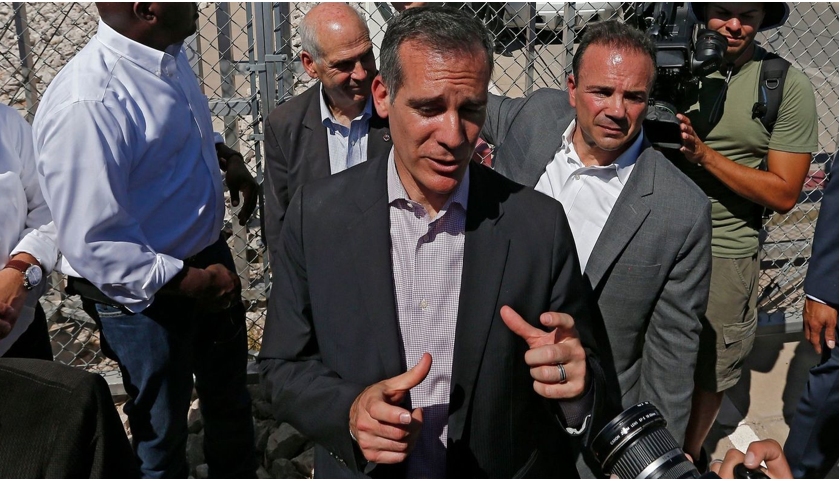 ALPERN AT LARGE--As stated in my last CityWatch article, conflating "feelings" with law enforcement on such heart-wrenching issues as homeless and border law enforcement lead to cruel results, and with the critical resources needed to help the truly unfortunate being squandered on those who are anything BUT victims.

... and sometimes politicians, celebrities, and media pundits (on either side of the political spectrum ... take your pick) use these hot-potato issues for political gain.

1) As stated in my last piece, there are homeless who are in need of help and living in a community with a family and a job, and then there are those who are just here for the free stuff ... conflating them  is childish and cruel.

... and then there are those who are sex traffickers and drug runners (and who will lie and take advantage of naive compassion) ... conflating all of these aforementioned groups is equally childish and cruel.

Then along comes Mayor Garcetti (photo above)to save the day!!! (Kind of like Mighty Mouse)

First, he raises his presence and virtue signals to us all how great he is with "the children" at the border!

... and then Mayor Garcetti has suddenly announced that the homeless problem has been fixed, and that living on the sidewalk is no longer legal!

And for those of us who ALREADY figured out what lawbreaking was for border and homeless issues, as with zoning and environmental laws (but with a need for flexibility and compassion for individual circumstances) ... are we now supposed to ignore the hypocrisy and double standards here?

No, President-Wannabe and still-LA Mayor Eric Garcetti, no matter how affable you can be, no matter how handsome you are, and no matter how politically-motivated you strive to be, there's still a reason or three why the homeless problem, income inequality, and the cost-of-living has gone up for the middle class with an inverse relationship to that same middle class's quality of life ...

... all on your watch as City Council President and Mayor.

1) Letting things spin out of control, and then embarking on a sudden cleanup to prepare the City of Los Angeles for a successful 2020 Olympics, is NOT good governing, and will probably not succeed.

2) Conflating all homeless and RV/camper-dwelling individuals isn't fair or accurate, and that conflation (whether by Mayor Garcetti for political purposes or any of the rest of us) does anything BUT solve the problems.

3) And forcing law enforcement officials told by political leaders to stand down against blatant rule-breaking by homeless and other public safety scofflaws in the City of Angels (and who damn well know that standing up for the law gets them demoted or fired) with decrying ICE officials as "Nazis".

Those of us who are Jewish know that neither adults nor children are being herded into death-camps and killed in large numbers by ICE, the LAPD, the FBI, or any other branch of law enforcement, so can't help BUT resent the Nazi comparison.

American law enforcement officers are NOT Nazis, are NOT cruel, and will defend the innocent with their lives:

1) Most Americans know that--as stated by Senator James Lankford (R-OK)--the majority of those seeking legal or illegal access to the United States are doing so out of economic opportunity, but that a small but real number are dangerous, and are associated with sex trafficking or drug running, and therefore do require surveillance and monitoring as a threat to our nation's safety and security.

2) Most Americans also know that, as also stated by Senator Lankford, HHS, DHS, ICE, and border patrol agents are working to restore and reunite families, and--most of all--are working to protect children and keep them safe, and that demonizing these professionals as "Nazis" or any other false and horrible moniker is just plain wrong.

And dangerous, to boot.

Mexico, China, and Canada, and every other nation on this planet, has rules to determine who is in their nations' borders legally, and for how long they can stay in those nations legally.  Our biggest conflicts appear to be with Mexico, which has very straightforward and strictly-enforced laws to this effect ...

...the same Mexico which knowingly allows those fleeing war and life-threatening danger in Central and South America to go straight through its territory and access the United States. Those seeking asylum are safe when they reach the Mexican border, and everyone who is reasonable knows that.

Mexico's current policy of sending asylum-seekers to the United States is as appropriate as, for example, the United States to let all Mexican and other Latin American citizens who have expensive health care needs to be knowingly sent to Canada because Canada has Universal Health Care.

It's still one big LIE, and one that gets harder, and inevitably more painful, to fix when the laws finally become enforced:

2) So, it's just as fair to blame our current Mayor for letting things get out of hand because he is (gasp!) finally obeying homeless, criminal, zoning, and other laws ... and then take note at how doggone hard it will be for the City of Los Angeles, Sacramento, Washington, or any other location where laws are made, to actually enforce the laws they have made (and which were made for darned good reasons).

After decades of ignoring the law, and letting things spin out of control, it will invariably be that much more painful and heart-wrenching to return to enforcing the law.

Just don't blame those of us who never wanted, and never respected, any end to law enforcement in the first place.

(Kenneth S. Alpern, M.D. is a dermatologist who has served in clinics in Los Angeles, Orange, and Riverside Counties, and is a proud husband and father to two cherished children and a wonderful wife. He is also a Westside Village Zone Director and Board member of the Mar Vista Community Council (MVCC), previously co-chaired its Planning and Outreach Committees, and currently is Co-Chair of its MVCC Transportation/Infrastructure Committee. He was co-chair of the CD11 Transportation Advisory Committee and chaired the nonprofit Transit Coalition and can be reached at alpern@marvista.org. He also co-chairs the grassroots Friends of the Green Line at www.fogl.us. The views expressed in this article are solely those of Dr. Alpern.)