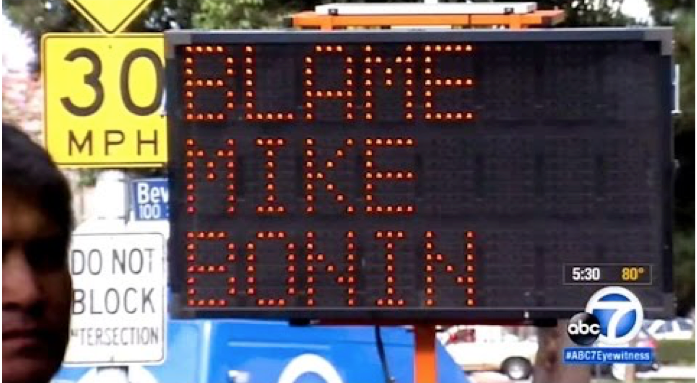 BROKEN PROMISES-Brentwood residents received an email recently from our Councilmember Mike Bonin touting the approval of the Brentwood School expansion plan. The school is located at the gridlocked intersection of Sunset Blvd. and Barrington Place, just west of the 405 freeway.

According to the announcement, Brentwood School would meet a new “Sunset Standard” by reducing its peak hour traffic by 40% after a whopping 38% enrollment increase from 695 to 960 students.

A 40% reduction in school-related traffic would be a welcome relief for the Westside residents and commuters who contend with gridlock on a daily basis. School traffic from parent pick-ups and drop-offs is a big contributor to the problem.

The community had reason to expect that Brentwood School would have to bring its traffic mitigation program in line with that of the Archer School for Girls just a few blocks away. The City has held Archer to strict standards for its nearly 20 years of existence, including 76% mandatory busing and limits on the number and size of events that can occur during peak traffic hours.

And in November, the City Planning Commission approved conditions requiring Brentwood School to reduce its traffic by 40% in return for allowing the enrollment increase.

So what happened? After the City Planning Commission’s ruling, the Council Office and Brentwood School negotiated a new agreement that gutted the CPC’s conditions.

And then the revised conditions were slammed through PLUM and the City Council without any discussion, without hearing public comment, and not even mentioning that the conditions were different from those recommended by City Planning.

Although the community, represented by the Brentwood Community Council, had been a part of the negotiations up through the CPC hearing, they were cut out of the discussion while adjustments were made.

No longer was the school held to a 40% reduction in traffic:

Opportunities to make a real difference in traffic don’t come along often, particularly on the Sunset corridor. And it isn’t often that the community and City Planning are in alignment on appropriate mitigations.

Therefore, it is particularly disappointing that yet another backroom deal between a Council Office and a well-heeled applicant goes against the community’s interest.

(Lauren Cole grew up in Los Angeles and has been living in the Brentwood and West LA areas for over 25 years. She is the Transportation Representative to the Brentwood Community Council and on the Board of the South Brentwood Residents Association. When she is not working on neighborhood issues she runs a strategy consulting firm focusing on media businesses, Cole Media. (www.colemediala.com. [[hotlink]] The views expressed in this article are those of Ms. Cole and Ms Cole alone). Prepped for CityWatch by Linda Abrams.