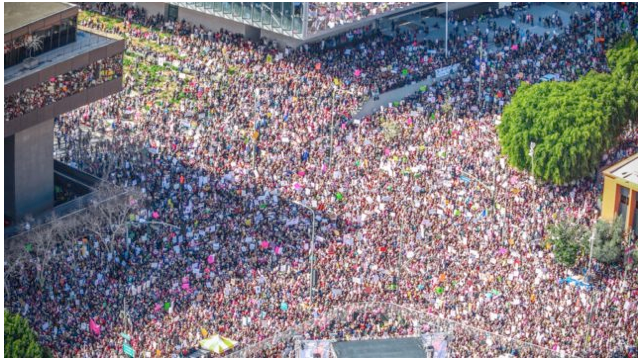 FIRST PERSON REPORT--On the Saturday following the Inauguration, I joined three-quarters of a million women, men, and children gathered in downtown Los Angeles in what would be the largest women’s march in the world. The crowd represented both experienced and newly minted activists. Perhaps some had originally joined for what my kids refer to as “FOMO” or fear of missing out, snapping selfies in front of colorful signage. For others, being part of something bigger quelled the fears and anxieties that had surfaced on November 8th. With hope, everyone who participated (and those who followed from their living rooms) will feel empowered to continue activist efforts to protect rights at risk and the future of the planet.

Helen Reddy’s a capella rendition of her feminist anthem, “I Am Woman,” spoke to those of us who are old enough to remember the seventies. Women, like one in a clip broadcast on the side of a media trailer, never believed they’d be marching again for battles fought decades ago. As I stood near the staging later in the day, I overheard a college student explain to a new friend that she had stumbled into the march– but “I’m also a feminist, you know.” If we’ve become complacent about defending our rights, this election and what’s at stake may serve as a wake-up call for those of us who have been politically active, as well as those who are new to the experience.

The mission of the Official Women’s March Los Angeles was to “stand together in solidarity for the protection of our rights, our safety, our health, and our families – recognizing that our vibrant and diverse communities are the strength of our country” and in support of “the advocacy and resistance movements that reflect our multiple and intersecting identities.” In many ways, the crowds that gathered downtown represent the diversity that makes our city so special, unified to defend the rights of all.

As many of the speakers at the event expressed to the crowd, it’s crucial to stay organized, not only for one day. Actress and activist Christine Lahti added, “If you don’t know what choice to make, make one that helps someone else, through city council, your neighborhoods, working on ordinances.” This is just the first step.