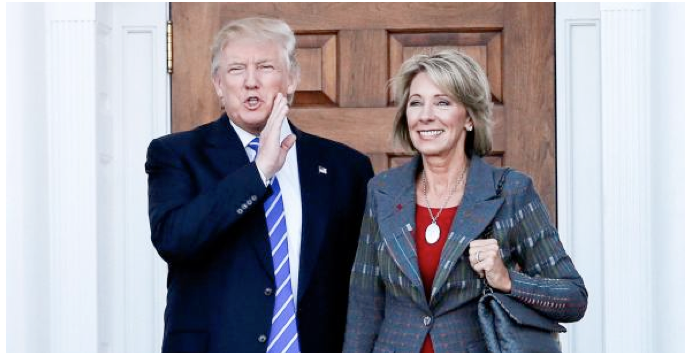 EDUCATION POLITICS--At Tuesday’s LAUSD board meeting, the school board will take on public school destroyer Betsy DeVos (Photo above: Betsy DeVos with Donald Trump), Trump’s nominee for US Education Secretary.

Board President Steve Zimmer will introduce a resolution, which reads in part:

“…the Board of Education calls on the President-elect and his Nominee for Secretary of Education to re-affirm the role of public schools to serve every student that comes to the school house door, acknowledge that our public school[s] are an essential foundation [of] our democracy and indicate that they will support policies, initiatives and investments that serve all students and not some students and that they will support and invest in policies and initiatives that support equity, achievement and excellence while stabilizing instead of destabilizing our public school systems…”
It's sure to be popular in blue, blue California. And it will keep board members, including those running for re-election, in the news.

But at some point, the press conferences will be over and we will begin to navigate our new reality in real situations.

Turns out “at some point” is already upon us.

On the very same agenda, Board President Steve Zimmer is proposing a school that contradicts this lofty resolution. The $10 million (to start) Playa Vista Middle School, which didn’t even face a quorum to be vetted at the Bond Oversight Committee, is on the Board’s consent calendar. So, no discussion necessary. (Although, we’ve discussed it in the blogosphere.)

The Playa Vista Middle School that caters to certain Westside families cannot be described as a policy, initiative and investment that serves *all students*. It specifically serves *some students*. It does not *support equity*, but gives greater resources to a more affluent and less diverse population than at any of the surrounding schools. It specifically *destabilizes our public school system* because the district is doing nothing to enhance the existing middle schools in the area as it creates the shiny new school for a select few.

So when the rhetorical flourishes fade away, are LAUSD’s board members committed to implementing policies that reject the new Trumpian reality they keep declaring is so objectionable? Or are they caving to the worst parts of ourselves that his campaign revealed to be more prevalent than any of us dreamed?

We’ll find out on Tuesday.

To be the public in public education

Last week, the LA School Board held a Committee of the Whole meeting at a special location. The address was not announced on the school district’s website, but it was revealed if you drilled down into the supporting documents, or if you were in the know.

I showed up at the District board room, the usual venue, after paying $8 to park. A security officer told me the meeting must be somewhere else because his boss was off campus.

Once I drilled down on the web, I got the new address and drove to the special location. No street parking was available in the bustling downtown Los Angeles location. I re-parked in the garage of the building, and found the meeting room on a plaza shared by a few popular restaurants.

The meeting was in full swing with board members and Superintendent Michelle King discussing the revised Strategic Plan, which was not posted with the board materials for the public. Some people in the room had printed copies, but I didn’t see a stack of them anywhere. So I listened and figured I’d get a copy later, off the web.

An hour and a half later, I left to pick up my daughter from school. The parking attendant told me I had chalked up a $38 parking tab!

That's a Betsy DeVos price tag! And it wasn't even for valet! Joking aside, that hefty price would be impossible for the many Title I moms whose children attend LAUSD schools.

As I fumed on the way home about the $38, I got to thinking about how hard it is to be the public in the 2nd largest school district in the country.

I already wrote about the Bond Oversight Committee voting to lighten its load, public disclosure be damned. That was just one example of the public being less and less a part of our public school district.

There are other challenges. We, the public, see the board agendas three days in advance. We have 72 hours to sift through upwards of 400 pages of documents to see if there is something of particular relevance. Important expenditures are stuffed into voluminous reports, so much goes unnoticed. Policy changes are sometimes disguised as innocuous actions. In three days, we are usually only able to react rather than thoughtfully participate in the issues of the district. Hence, the bug eyed looks and breathless comments sometimes seen and heard at those meetings.

Even if we were prepared to provide input on various agenda items, we would not be permitted to.

California has a good public meetings law and a strong FOIA-type public records act. But different agencies handle the public differently. While the Los Angeles City Council and the State Coastal Commission, for example, encourage public input by providing time for comment on each agenda item, parents attending five- or ten-hour long school board meetings with upwards of 50 items on the agenda are only permitted to make one comment during the entire meeting. That, of course, is absurd for a public school district.

To add insult to injury, labor union representatives, on the other hand, may comment on every single agenda item they wish to. When the unions don’t bother to comment, that’s sometimes a sure sign that they’ve had internal meetings with District and Board staff to hash out concerns before the Board votes—and before the public weighs in.

It isn’t that employees should be prevented from participating in District business, of course. But public school parents shouldn’t be kept out either.

Some parents are accommodated, such as parents whose kids attend charters. Charter petitions are now heard at their own separate meetings with a “time certain”.  According to an article in the LA School Report, Steve Zimmer, Monica Ratliff and Monica Garcia worked to ensure charter parents do not sit for hours waiting to make their case for a charter renewal amidst 50 other agenda items.

So, old school, public school parents, it seems all we need is a labor leader, a lobbyist or a lawyer to lead us so that we might be accommodated once in a while, too.

This is more than an exercise in alliteration.

It might be more efficient to run a public school district without the public. But before we start advocating for that, let’s remember that it’s precisely what Betsy DeVos has largely achieved in her state of Michigan. It’s what we are sure to see more of coming out of Washington, DC soon.

Will LAUSD resist that?

E-mail, call or write your school board member:

Write a letter to the LA Times editor.
http://lat.ms/2bynXZy