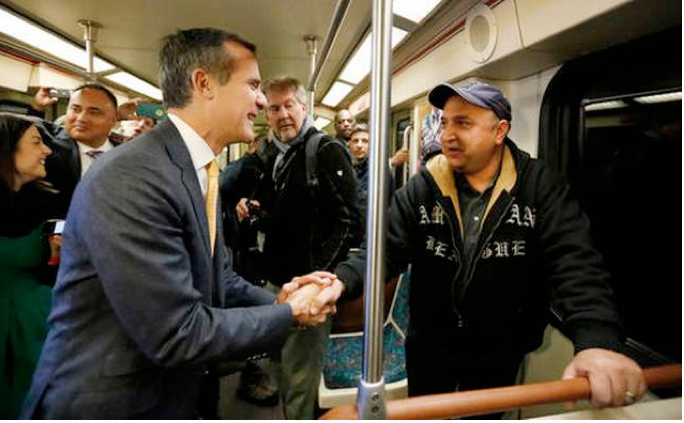 @THE GUSS REPORT-Los Angeles Mayor Eric Garcetti and the Herb Wesson-led LA City Council exist in a delusional bubble of courtesy claps and trite aphorisms that face existential challenges in 2017 when the federal government and state legislatures across the U.S. turn even more Republican red now that this weekend’s Senatorial runoff in Louisiana is over.

How Los Angeles fares in this new world depends a lot on whether these city officials (accompanied by the supportively delusional City Controller Ron Galperin, City Attorney Mike Feuer, and the forces influencing them all) see LA’s challenges with clear, fresh eyes. But if last week and this week at LA City Hall are any indication, they won’t.

On Tuesday, the day after the FBI warned of an overseas terror threat to LA’s subway system, Garcetti told the assembled media (protected by an abundance of militarized police nearby) that he is riding the subway to “let people know I'm not asking them to do anything that I wouldn't do myself."

Garcetti was also accompanied by a contingent of (hardly) undercover LAPD, each identifiable by their untucked golf shirts with the outline of a gun underneath. Only when the Mayor by himself rides the train system, at night, from say MacArthur Park station, or on the Blue Line, will he experience subway dangers as does the public. As PBS’s David Nazar shows in this recent video, the MTA (where Garcetti is First Vice Chair) has an appalling lack of security that can’t even stop turnstile cheats.

Despite the media circus, which garnered national television coverage, the LA City Council had nothing to say about the threat in its meetings which, on Wednesday, instead squandered 41 minutes of its 3-hour meeting kissing the ring of firefighter union rep Frank Lima, as he left his dual-salaried LAFD and union gig for a role with the national firefighter’s union. The city officials have all along been silent on Lima’s role in removing LAFD fraud whistleblower John Vidovich (as first exposed in my CityWatch articles and subsequently by LA Weekly and on KCBS) but each expressed profound love for Lima, who facilitated $350,000 in precisely timed campaign donations to Garcetti and themselves. Most ironic in the presentation was Jose Huizar, City Council’s unofficial in-house playboy, saying at the 1:05 minute mark of the meeting how he is going to miss “hanging out…and joking around” with Lima, and about…wait for it…character building. Even Vin Scully didn’t get this degree of love in City Hall.

A day earlier at the LAFD Commission meeting, statistics regarding the backlog of thousands of fire inspections (a critical subject just days after the deadly Oakland inferno) were provided verbally, but not in writing. Department spokesperson Jeremy Oberstein said that it was done this way “at the request of a city official,” but could not explain which official requested it, why and when they will be available in writing.

Robert Cherno, a land use expert who has long-followed the subject, wrote to Sue Stengel, the Garcetti-appointed LAFD Inspector General, according to her LinkedIn page:

“Your failure to provide me with (updated fire inspection statistics)…leaves me wondering if said documents indicate that a large majority of inspections are still not being performed by your Department as required? The lack of any mention of said inspections during the presentation by staff yesterday at the Fire Commission public hearing has me very concerned, especially after the fire in Oakland the other day, which killed quite a few people.  No doubt that tragedy could have been prevented had inspections been done prior to the fire.”

Then there was the City Council’s Wednesday discussion on Councilmembers Paul Koretz’s and David Ryu’s years-in-the-making mansionization cessation effort. It’s likely to ultimately fail because it has many of the same flaws as the City Council’s recent moratorium on these oversized houses on lots previously occupied by smaller mid-century homes. Here are just two of the many recently started “McMansions” in my own neighborhood. Paging Council District 5 candidate and Koretz opponent, Jesse Creed!

And that’s just the damage City Hall did by mid-week. This coming week will be no different.

On Sunday, San Pedro’s Councilmember Joe Buscaino called into The KFI Sunday Morning News with Elizabeth Espinosa on KFI AM-640 to talk about this week’s effort to decriminalize street vending, comparing entrepreneurial selling of unregulated street food and bootleg DVDs to LA’s high tech Silicon Beach. Nice try. Perhaps City Hall figures that since it hasn’t been able to stop the rampant illegal driver’s license and passport industry in places like MacArthur Park, they might find it easier to deal with the conundrum of homemade empanadas and socks. The problem, as is often the case in LA, is that it is a feel-good effort that makes for happy headlines without genuine public input – or the resources – to do it right.

And therein is LA’s problem. It is almost always pits the feel good against doing things wisely and with proportionality the things that need to be done the most.

Whether and how much longer that delusional bubble survives is anyone’s guess.

(Daniel Guss, MBA, is a contributor to CityWatchLA, KFI AM-640 and Huffington Post. Follow him on Twitter @TheGussReport. His opinions are his own and do not necessarily reflect the views of CityWatch.) Edited for CityWatch by Linda Abrams.