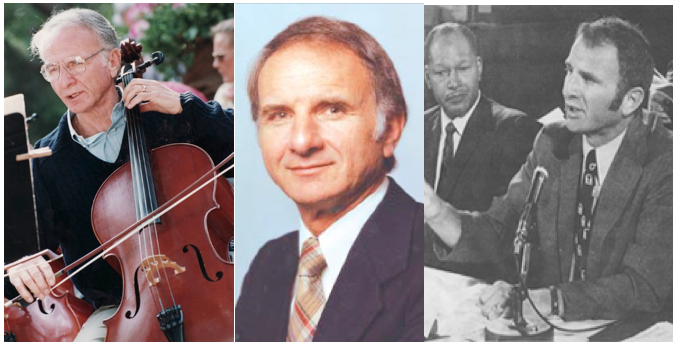 REMEMBERING ED EDELMAN-Toward the end of the film “To Kill A Mockingbird,” Alabama lawyer Atticus Finch (Gregory Peck) has just lost his case defending a black man, Tom Robinson, who had been unjustly accused of raping a white girl. Dejected, and bearing the heavy moral burden of having failed the local black community, he walks down the aisle to leave the courtroom. As he does so, all the black townspeople segregated in the “colored” balcony solemnly rise to their feet out of respect for his effort on their behalf. His young daughter “Scout,” seated with them, peers over the rail, oblivious, until she feels a tap on her soldier and hears a gentle whisper from the Negro Baptist preacher, Rev. Sykes. “Miss Jean Louise, stand up. Your father’s passin’.”

I thought of that scene when I received a call from a longstanding friend that my former boss, Los Angeles County Supervisor Edmund D. Edelman, had just died at the age of 85 a few minutes earlier. “I didn’t want you to hear it first on the news,” she told me.

Ed had suffered terribly over the last several years from Atypical Parkinsonism, a neurodegenerative brain disorder that gradually robs those afflicted of the ability to move or even speak. It was almost too painful to imagine the man I spent five years working for in the County Hall of Administration, who played tennis regularly and always insisted on taking the stairs instead of the elevators up to his eighth-floor office, reduced to this enfeebled condition and utterly dependent on round-the-clock attendant care. I have to believe that his death came as a release.

With his quiet and determined decency, Ed had more than a little Atticus Finch in him. He entered politics the old-fashioned way: attending public schools, serving a hitch in the Navy, graduating from UCLA in political science and UCLA Law School. He served as a staff counsel for legislative committees in Washington and Sacramento, and at the National Labor Relations Board, before making a successful bid for public office in 1965, running a mildly insurgent City Council campaign to score an upset victory against a popular establishment-backed incumbent.

During his time on the City Council, Ed was a quiet but committed rebel. He criticized police abuse, stood up against censorship, defended civil rights, pushed to fluoridate the City’s water supply in the name of dental health, and tirelessly advocated to improve public services.

Shortly after beginning his third Council term, a position opened up on the Los Angeles County Board of Supervisors, and after a hard-fought contest, Ed was elected in 1974 to represent the Third District, which at the time stretched from the northeast San Fernando Valley down through Hollywood and the Westside, across the city to take in part of downtown, and included unincorporated East Los Angeles and southeastern cities like Bell and Commerce.

Though he lived on the Westside near his beloved UCLA, Ed was always proud of his service to his Eastside constituents. He didn’t speak Spanish, but his field staff did, and they made sure those unincorporated communities were properly taken care of. Thanks to Ed, the roads, parks, and public services were considered much better than in the neighboring cities. In 1990, after a successful voting-rights lawsuit filed by the Department of Justice, the ACLU, and the Mexican-American Legal Defense and Educational Fund, a federal court scrapped the Board’s gerrymandered district map and redrew the lines, shifting Ed’s district west of downtown to include more of the San Fernando Valley, the Santa Monica Mountains, and the coastline, stretching from Venice up to the Ventura County line. He quickly embraced the issues and concerns of his new constituents—wilderness and open space preservation, fire safety, coastal environmental protections—with the same enthusiasm and commitment he had formerly served the Eastside.

His signature issues centered on an abiding commitment to serving those in need, ranging from abused and neglected children and battered women to the medically indigent, the mentally ill, the homeless, and the transit-dependent. Representing the area of West Hollywood both before and after it formally incorporated as a city, he embraced the LGBTQ community and called for improved AIDS care and treatment and protection against discrimination long before it was popular or even acceptable in many political quarters.

He was also a champion of the arts, representing a district that initially included the Music Center and the future site of Walt Disney Concert Hall (a County project he helped initiate thanks to generous founding gifts from Walt’s widow Lillian Disney and their two daughters), as well as the Hollywood Bowl, the John Anson Ford Amphitheatre, and the Los Angeles County Museum of Art. An amateur cellist who practiced regularly on his lunch hour across the street at the Music Center, Ed was fiercely protective of the Los Angeles Philharmonic and LA Opera, and invigorated the County’s grant-making Arts Commission with dynamic new leadership and increased funding.

Nor did he shy from confronting controversial issues that he deeply believed in. He reviled Howard Jarvis and Proposition 13 for its negative impact on local government taxing and spending authority, despite the measure’s enormous popularity with the public; he cajoled a reluctant Sheriff Sherman Block into embracing a sweeping set of reforms after a spate of alarming officer-involved shootings; and he tirelessly (but unsuccessfully) pushed to expand the number of supervisors to create smaller and more responsive districts, and establish an elected County Executive to emulate state and federal constitutional principles of checks and balances through a separation of executive and legislative powers.

One of his final acts before retiring in 1994 was to successfully broker an agreement to end a contentious decade-long development battle in the Santa Monica Mountains and acquire and preserve nearly 700 acres of prime wilderness open space for the state parks system.

Retiring by choice in 1994 well before the County adopted term limits, Ed went on to a successful career as a mediator and arbitrator, policy fellow at the RAND Corporation, and consultant on homelessness and other issues before he was felled by his illness. He was truly a committed public servant to the very end.

On a personal note, I will always be more grateful than I can express for the opportunity Ed gave me as a former broadcast and print journalist, when he recruited me to change careers and join his staff as communications deputy. Apart from serving an honorable and honest public official, I experienced firsthand how much good the public sector could accomplish with capable and dedicated leadership and staff, and I made some of my closest and most respected friends.

Working for a real-life Atticus Finch was a rare privilege that I will always cherish. So stand up, Los Angeles. A great man has passed.

(Joel Bellman is a former Communication Deputy to Los Angeles County Supervisors.  This piece appeared originally in Fox and Hounds.)  Prepped for CityWatch by Linda Abrams.