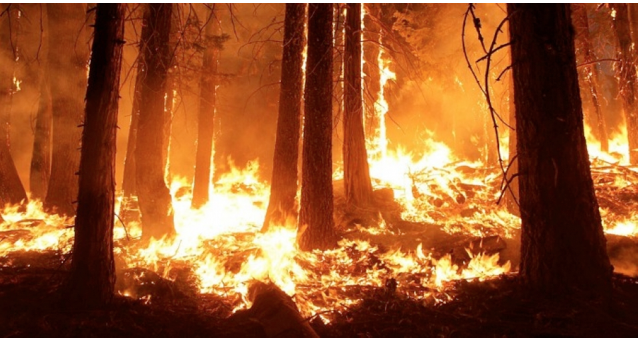 DROUGHT CONUNDRUM-While fire is always part of nature, many attribute its increased frequency and intensity to climate change. Certainly, that makes sense: longer stretches of warm weather and earlier snowmelt create a fire-friendly scenario. But what does this connection do for us, beyond providing another reason to rue the continued assaults on our climate? For the terms “climate change” and “global warming” elide the dynamics that create the constellation of factors that, collectively, we call climate. However, by zeroing in on the ecology of fire-prone regions, we can find ways to minimize the risk and severity of the fires that threaten homes and wilderness areas—not to mention the lives of firefighters.

For example, since arid conditions beckon fire, we can ask how healthy environments maintain moisture. Plentiful rain is one obvious answer, but equally important is what happens to rain once it falls. Enter “green water”, or water held in soils. We generally think of freshwater in terms of lakes and rivers, but two-thirds of rainfall becomes green water. When rain falls on living soil that’s rich in organic matter, it stays in the system and sustains plant and microbial life. Rain that falls on soil depleted by tillage or chemicals streams away, as does all the rainwater that strikes concrete or asphalt. Dry, degraded soil (read: dirt) doesn’t absorb water, thirsty though it may be. For every one percent increase in soil organic matter, soil stores 20,000 gallons of water per acre.

Historically, our western landscapes were kept hydrated in part by beavers. According to Brock Dolman of The WATER Institute’s Bring Back the Beaver Campaign, the winsome rodents act as “water engineers”. By building dams they harvest water and direct its flow, and the moist soil that surrounds the pools yields lush vegetation. Beavers, he says, serve as ecological “shock absorbers” so that land is less susceptible to drought and fire. Beavers are native to much of California, and were numerous prior to the early nineteenth century, when they were mostly wiped out. (Water-wise, California’s “fur rush” was a bigger deal than the Gold Rush.) Nationwide, today beavers number around 10 million, down from an estimated 200 million when Europeans arrived on our shores.

One ongoing challenge in staving off conflagrations is keeping down potential fuel: the dead trees and dried leaves and grasses standing or laying around, ready to ignite. Australian soil microbiologist Walter Jehne, whose Regenerate Australia program emphasizes reducing fire risk, says nature has two basic strategies for dispensing with combustible material. One is through fire, which tends to perpetuate a fire-prone regime: favoring plants that require fire for germination or that thrive on bare ground. (One such tree is the Eucalyptus, which sprouts and regenerates quickly after fire. Originally from Australia, Eucalyptus, now pervasive in California, have been implicated in deadly fires, notably the 1991 Oakland Tunnel fire that killed 25 people.)

The other means of managing fuel is recycling the plant matter biologically. This could be by way of animals that eat the plants or, says Jehne, “fungi that can break down litter or fuel into organic matter and reincorporate it into the soil where it is safe from fire.” Either way, plant debris is returned to the soil so that the ground becomes a sponge for rain and dew, thereby creating a fertile environment for plants to thrive, draw down carbon and cycle water. All of which make uncontrolled fires less likely. 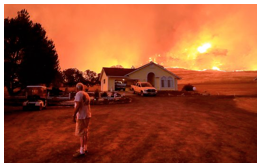 "We can think of climate change as the manifestation of disrupted carbon, water, nutrient and solar cycles."

We can think of unbridled wildfires as a result of climate change, as well as a contributor to it. Extensive bush and grassfires spark a negative spiral that leads to more greenhouse gas emissions—in Australia, annual CO2 emissions from fire exceeds that of fossil fuels—dry, tinderbox conditions, and bare soil unwelcoming to plants and vulnerable to erosion. When sunlight beams down the ground gets a direct hit, without the cooling effect of water transpiring through plants. The alternative scenario, in which the land holds moisture and would-be fire fuel is processed biologically, encourages what we want: living soil that stores, rather than releases, carbon; plants providing food and shelter for animals, birds and insects; water cycling within the system rather than evaporating or rushing away.

In other words, climate change isn’t merely a looming specter that’s tied up in physics and the fiat of large corporate and governmental entities. It’s also about what we do with land. Climate dynamics are too complex to be reduced solely to an equation involving CO2. Rather, we can think of climate change as the manifestation of disrupted carbon, water, nutrient and solar cycles. With this approach, we see that wildfires—along with droughts, floods, heat waves and other problems associated with climate change—are not inevitable.

In my travels reporting on ecological restoration I’ve seen numerous instances of people allying with natural processes that hold water on the land, and seeing multiple benefits including reduced risk and impact of fires. Chris Henggeler, who manages a parcel in Western Australia the size equivalent of New York’s five boroughs, has minimized fire damage by keeping water in springs and creeks longer into the dry season, installing fire breaks, and making use of dew, which he calls integral to the “micro-water cycle”.

As we look toward future fire seasons, there is indeed much we can do to douse the flames—and curtail the degree of flames need dousing to begin with.

(Judith D. Schwartz is a longtime journalist who lives in Vermont. Her most recent book, Water In Plain Sight: Hope for a Thirsty World, has just been published by St. Martin's Press. Her previous book is, Cows Save the Planet (Chelsea Green Publishing). This perspective was first posted at Common Dreams.) Prepped for CityWatch by Linda Abrams.