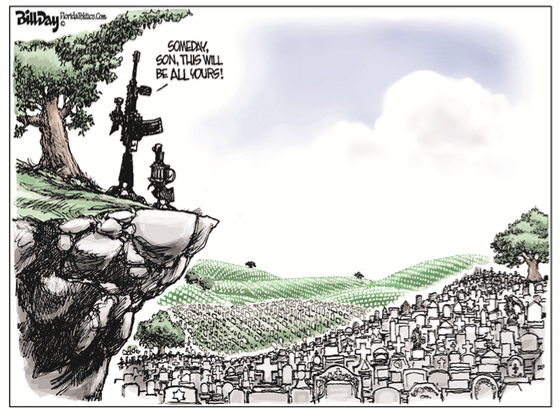 This seems like an oddly careless, even Orwellian, use of the word, because it implies that there is a courageous way, as opposed to a cowardly one, to act out hatred. The late cultural critic Susan Sontag rightfully got herself into hot water when she argued that the 9-11 hijackers were not cowards because they were willing to die for a cause. But killing innocent people randomly in churches, mosques, and malls or by smashing airplanes into buildings seems pretty far outside the uncertain territory between cowardice and courage that most of us occupy.

If we’re honest with ourselves, very few people have gotten through life without moments of cowardice. Even fewer know for certain how they might react in the future when extreme courage is called for. It is easy to pretend that we would rise to the occasion, but sometimes we just don’t. I was sitting in the low bleachers to the left of home plate at a Red Sox game when a foul ball came flying in the direction of myself and partner. Much as my fantasy might have been that I would gallantly interpose myself between her and the ball, I ducked.

As did the president in the aftermath of El Paso and Dayton. He was offered a ripe opportunity to stop kissing the butt of the self-important NRA and lead on the sensible gun safety reforms that more than 80 percent of the electorate favor. Given this perfect opportunity for a profile in courage, he punted. We got not just retreaded bromides but nauseating hypocrisy. Wasn’t the president who addressed the nation in his patently insincere teleprompter mode the same demagogue who laughed when someone in the audience at one of his rallies shouted that immigrants should be shot?

Courage can be as instinctive as cowardice, as in the case of the inhumanly heroic Kendric Castillo, who died rushing directly at the mass murderer in the Highlands Ranch school shooting. But raw courage for most of us means being as brave as we can in spite of fear, hesitation, and ambivalence. As the painter Georgia O’Keeffe said, “Sure I’m afraid. I’m afraid all the time. I just never let it stop me.”

Our public spaces have become fearful theaters of war. Supposed leaders prefer to divide the body politic to remain in power and carry on as if prosperity equaled peace. Meanwhile we tolerate the utter shame of spooked kids having to rehearse mass shooter drills in their classrooms.

The president has to know that there are too many assault rifles that are too accessible to too many angry people, and that he himself has stoked that anger—grounds by itself for impeachment and trial. As the columnist Nick Kristof has repeatedly argued, we could make huge inroads into mass shootings if we banned such weapons, adopted universal background checks, and licensed all guns as we license the privilege of owning and driving cars. So far, Mr. McConnell and his Senate colleagues remain in servile lock-step with our boorishly maladroit leader. Their inaction drips with too many layers of innocent blood. Cowards.

(Winslow Myers, the author of “Living Beyond War: A Citizen’s Guide,” serves on the Advisory Board of the War Preventive Initiative, and is a member of Rotary. The opinions expressed here are his own and do not represent official Rotary policy.)