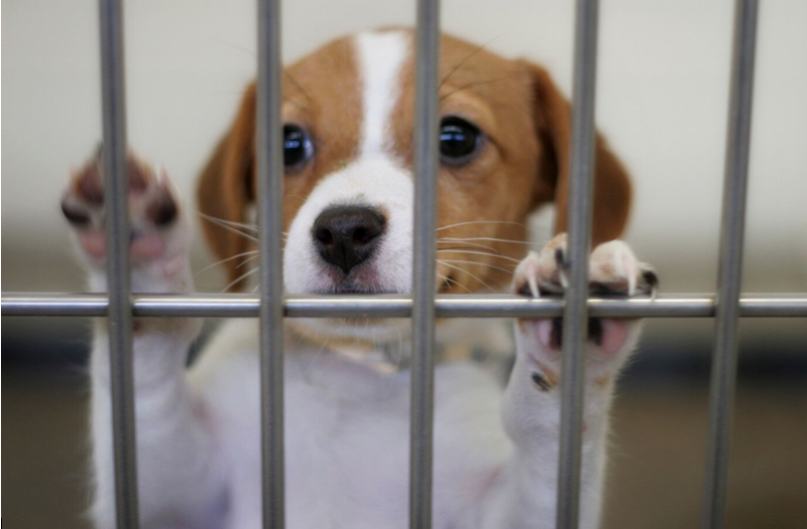 Each provides sheltering and adoption services in similar contiguous geographic areas, although the County serves contract cities and unincorporated areas that span a larger overall range of distances -- from the Kern County border to Long Beach and from Thousand Oaks to Pomona/Mt. Baldy.

But basic operational differences were officially defined on July 6, when the County formally approved a motion by Supervisor Katherine Barger to implement a progressive "Socially Conscious" approach to animal sheltering, rejecting the Best Friends' "No Kill" policy that rules the City.

“The Department of Animal Care and Control does not use the term ‘No-kill,’” Mayeda wrote in an email.  “However, our live release rate for dogs is 88%, and for cats is now 53%."

She stated that in cases of dangerous dogs, feral cats and other animals that are irremediably suffering or have a poor prognosis for recovery, "we do euthanize animals as necessary, but we always make every effort to find live outcomes for the animals in our care."  She emphasized that being "Socially Conscious" also includes concern for public health and safety.

LA City Animal Services is struggling with tragically overcrowded shelters, heavily populated with Pit Bulls and cats/kittens, under the onerous mandates of "No Kill." Dog licensing -- a basic indicator of owner responsibility and a major source of spay/neuter revenue -- shows a 42% decrease from July 2018. (See LAAS statistics here.)

PETA (People for the Ethical Treatment of Animals) Senior Vice President of Communications Lisa Lange testified, "PETA enthusiastically supports this motion and thanks Supervisor Barger for introducing it. The ‘no-kill’ movement may have started with the best of intentions, but it has caused a lot of harm for animals."

"We all want an end to the homeless animal crisis and the way to get there isn’t by closing shelter doors and turning animals away to keep a meaningless ‘save rate’ robust. In LA city, we’ve seen that, in the rush to attain ‘no kill’ status and keep intake numbers down, the city began to fail to respond to emergency calls and had a phone system that made it impossible for a caring community to reach anyone during emergencies. This is slowly changing, thankfully but too many animals have paid with their lives."

Diana Mendoza, manager of PETA’s "Let’s Fix LA" program, stated, "I’m here representing our more than 153,000 supporters in LA County asking you to approve the socially conscious animal sheltering motion. . . . I would especially like to note the importance of license canvassers and spay/neuter vouchers that the motion includes."

"This is a smart, compassionate, level-headed model that has the power to bring the community together. Instead of reducing animals to statistics the way the “no-kill” movement does, socially conscious sheltering puts the animal’s interest firmly in focus along with what is best for the community. It is what every animal agency should strive to be: transparent, resourceful, accountable and unafraid to do what is truly best for the animals in its care. "

I am thrilled to see L.A. County adopt the Socially Conscious Animal Sheltering principles. These principles maintain the life-saving goals of the “no-kill” movement while solving some of the tragic side effects that have harmed and often killed animals and even humans.

Our communities and our pets are diverse and unique. Trying to realize unrealistic goals with cookie-cutter practices has led some shelters to overcrowd, resulting in more disease, injuries and deaths as well as unethical adoption practices of placing sick or dangerous animals with unsuspecting families, putting their wallets and even their lives at risk. Others refuse admittance and leave animal owners and animal problems out in the community with no good solutions.

These reforms have been sorely needed for many years, she added, "The large humane organizations should have taken the lead in solving these problems but didn’t. Fortunately LA County Department of Animal Care and Control is joining other professional sheltering groups to lead the movement to better animal care and public safety.”

On May 13, 2019, CityWatch discussed that "No Kill has Failed - Socially Conscious Animal Sheltering Begins," as we celebrated the COLORADO VETERINARY MEDICAL ASSOCIATION STATEMENT - APRIL 9, 2019.

“As veterinarians, we have a responsibility to prevent and relieve animal suffering,” said CVMA President Will French, DVM. “The idea of the no-kill movement is misleading, and often increases animal suffering with unintended consequences. A Socially Conscious Animal Community is a more positive approach to animal welfare that treats animals respectfully and alleviates their suffering. As a board, a socially conscious approach is more in line with our mission of enhancing animal and human health and welfare in the state.”

On March 28, the Denver Dumb Friends League, founded in 1910, and now the largest community-based animal welfare organization in the Rocky Mountain region and a national leader in compassionate sheltering, issued a dynamic and compassionate commentary that must be read by anyone concerned about the present and future welfare of animals:

THE ‘NO KILL’ EXPERIMENT HAS HARMED ANIMALS AND PEOPLE

"No Kill" has been a gruesome experiment that has resulted in overcrowded shelters. The philosophy that Pit Bulls are "just misunderstood nanny dogs" has resulted in the release of dangerous animals and mauling and deaths of innocent people and pets by Pit Bulls all over the country.

It has prolonged the suffering of old, sick and injured animals whose lives could, and should, have been ended peacefully by veterinarians who can determine professionally the chances for a healthy and happy future.

It is time for America to lead the world out of the false perception that all animals must be "saved" and bad behavior -- including killing -- is merely "misunderstood."

We are raising a generation of young people who believe that aggression in dogs is the norm and that it is society's obligation to adopt them and/or at least keep them alive at all costs, regardless of the number of victims or the prospect for more damage and deaths.

HISTORY AND CHRONOLOGY OF 'NO KILL' IN LOS ANGELES

Since 2001, the City of Los Angeles had been under siege by an animal-rights extremist group, ADL-LA, which was openly affiliated with the ALF (Animal Liberation Front, classified as a "terrorist" group by the FBI.)

ADL-LA demanded that LA city shelters "Stop the Killing." They targeted homes and communities where LAAS employees and LA elected officials (including the Mayor) lived, with individuals in black costumes painted with white skeletons, waving placards with blood-red paint and various graphic accusations of “killing animals.” Red paint was also poured on steps outside employees’ residences and rumors about their personal lives were reportedly distributed on flyers in their neighborhoods. Threatening calls to homes and families were reported by City officials and staff.

Even then-City Attorney Rocky Delgadillo and his family became a target. Far beyond City Hall anyone associated with animal advocacy lived in fear.

In 2003, then-General Manager of LA Animal Services Jerry Greenwalt attended a Nathan Winograd "No Kill" conference and returned convinced this was the solution for Los Angeles.

The ADL-LA responded that it was not convinced, believed it might be a lie, and continued its terrifying and brutal protests and verbal attacks on shelter employees and officials, until Brenda Barnette, CEO of Seattle Humane Society (with no animal control experience), was appointed in 2010 by Mayor Antonio Villaraigosa, with Councilman Paul Koretz beaming in the background.

The ADL-LA announced it had found indisputable affirmation of Ms. Barnette’s capabilities during "four-days of investigative phone calls to her former associates." It agreed to call off the continued picketing, stating “. . . ADL-LA isn’t battle weary; we’ve fought animal campaigns for longer than the one to STOP THE KILLING at LAAS."

It ended, "In fact, if any of the city councilmembers vote NO on her appointment, we are fully prepared to take our protests to THEIR neighborhoods!”

This might just have been considered just political posturing but, on July 3, this same “forwarded” warning appeared on the Animal Liberation Front (ALF) website, right under pictures of animals being held by black-suited, masked rescuers. Their Endorsement can still be read on the ALF page, Animal Actions by Brenda Barnette and LAAS.

Upon completion of the Mission Hills (NE Valley shelter) in 2011, the City decided it couldn’t afford to staff it. (The City never appropriated funds to staff this shelter when the new-shelter expansion was planned.) It was an opportunity for Best Friends Animal Society to lease the $19 million facility for $1 per year, plus the City paying $200,000 per year for maintenance.

Actually, use of the Northeast Valley's new shelter by Best Friends Animal Society was discussed while Ed Boks was LAAS General Manager and became a reality shortly after Barnette was appointed. She testified that thousands of animals would die if there were any delay in approval.

Ironically, a June 29, 2019, article, “Bentonville animal shelter plans hit rough patch,”  reported, “Plans for an animal shelter are at a standstill after the mayor said the city shouldn't pursue an agreement with a third party to operate it.

Brent Toellner, senior director of national programs for Best Friends, said he wasn't at liberty to comment on ongoing lawsuits.”

WHY THE CHANGE FOR LA COUNTY IS NECESSARY AND GOOD

"No Kill" is not a reality. Rather, it is a self-serving myth and a very effective fundraising slogan. It is time for truth in sheltering -- that not ALL animals, just like not all people -- are loving, trainable or safe.

Adoptions of pets should not just be "free giveaways" because of the pressure to "clear the shelters." And, large charities should not be enablers in this practice. Adoption should mean a truly loving pet in a truly loving and responsible home (and sufficient concern by animal control agencies assure that laws for safety and humaneness are enforced).

One thing that is so obvious about "No Kill" is that all the responsibility is focused on the shelters and the demands for statistics, which Best Friends is now collecting nationwide. Where is the responsibility of the owners? Shelters are merely a symptom, not a cause of overpopulation and animal neglect/abandonment.

Marcia Mayeda, who is also Vice-President of the California Animal Welfare Association,

opined, "I do see a great difference between Socially Conscious Animal Sheltering and "No Kill." No Kill requires agencies to meet an artificially created 90% Live Release Rate; a number that has no basis in research or studies to support it as the right number.”

Dr. Roger Haston, former Chief of Analytics at PetSmart Charities, has shown quite clearly that chasing the No Kill target has also created many dangerous practices such as refusing admission to animals in need, overcrowding and disease in shelters, and release of dangerous dogs into the community.

I think No Kill served a purpose several decades ago to jolt the nation into awareness of the excessive euthanasia at animal shelters. But, we have evolved beyond that and Socially Compassionate Animal Sheltering is a more responsible and humane approach to the very different tenets of No Kill.