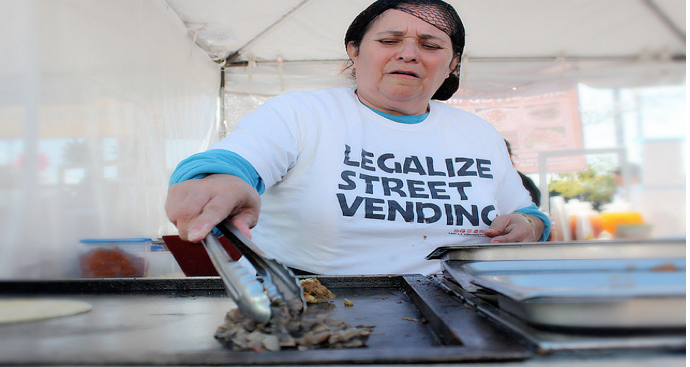 GUEST WORDS--As an immigrant myself, I understand the situation and appreciate the City's effort to protect the immigrant community by not actively participating in the federal's deportation effort but, if the City's intention is to protect the undocumented community, will the vending permits be issued "only" to them? Will the City be providing work permits in the form of vending permits? (See story, “LA Council Committee Moves Street Vending Legalization Forward”)

How would they determine the cost and requirements for the permits? Will the County wave their requirements? Will the State wave their regulations? Street vending also generates "unreported" income, why would anyone pay for a permit that might force them to report the income and/or pay taxes?

There is no easy solution to the problem but providing vending permits will only worsen the situation.

The City cannot currently enforce those Municipal codes and City ordinances that prohibit Street vending, the County cannot monitor, regulate or enforce health requirements and the State is not even trying to collect sales taxes. What will be the plan to monitor and enforce those with or without permits?

They are considering two vendors per block but what will happen when there are four vendors on a block? Vending permits will increase the number of street vendors, some will have permits and others will not! The City, the County and the State will still have the same "limited" enforcement resources, why would they want a bigger headache?

Street vending is a custom in third world countries because they do not have social services. For the vendors it is the only way to make a living and for their customers it is the only thing they can afford with their salaries. Every elected official in city government promised to deliver a world class and a safer Los Angeles. Are they telling us now that a third world status is the best that they will do?

Is it fair to them that street vendors pay less for a permit and use City Streets to conduct business at no cost and being a cash business, income and sales taxes are none existent! Will they City carry the liability insurance for those permitted vendors?

If the city of Los Angeles, or any other city, wishes to help the undocumented population and act against federal mandates, they should just eliminate, within the city limits, the need to ask and/or prove immigration status at any job. The only thing needed should be the willingness and ability to do the work and the job opening! The federal government already provides them with a tax ID number for the purpose of filing income taxes and the City has already set a minimum wage within city limits.

((Edwin Ramirez is a long time activist and co-publisher of Pacoima Today.)