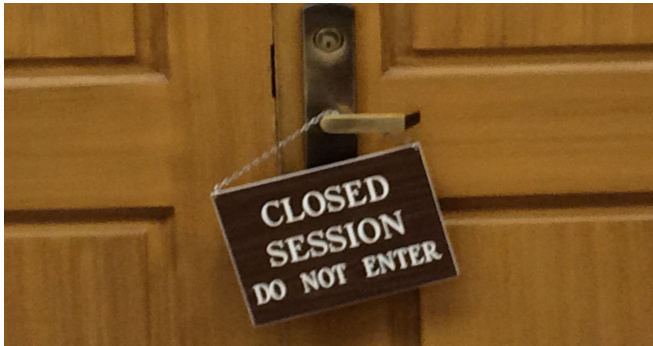 THE BROWN ACT IS WRONG -- According to the Congressional Research Service, the U.S. House of Representatives has met behind closed doors four times during the past 186 years—in 1979, 1980, 1983, and 2008.  That’s about one closed session per half-century. By contrast, the LA City Council and the LA County Board of Supervisors average about one closed session per week.

Since August 1st, the City Council has placed nineteen items on its closed-session agenda. This coming week the Board of Supervisors will meet behind closed doors three times in a 24 hour period. Why all the secrecy?

Congress managed to keep its debate open during both World Wars. All it takes to send our local leaders into the bunker is an update from their real estate agent. Why? Because the Brown Act permits them to do so?

The truth is that the Brown Act is wrong to allow for any exceptions to California’s open meeting requirements. The sky will not fall if ‘pending litigation’ or ‘real estate acquisitions’ or any of the other issues deemed top-secret by the Brown Act are discussed during open sessions of the City Council or County Board of Supervisors. On the contrary, doing away with closed-session meetings will strike a blow to those who would abuse the public’s trust.

Into closed-session is the first place the LA City Council scurried in 2012 upon learning from HUD that scores of developers under the City’s purview were defrauding taxpayers, by taking federal money designated for the inclusion in affordable housing projects of apartments for people with disabilities, and then willfully neglecting to build those apartments.

Disabled residents reported going to apartment buildings that were advertised as accessible, according to the LA Times, only to find they weren’t. HUD warned the Council that it had ten days to agree to voluntary corrective compliance or face possible federal enforcement action.

Rather than comply with HUD’s directive, the City Council embarked on a four year legal misadventure which entailed four major lawsuits, including the one recently settled by the city for $200 million ($20 million of which is going to the plaintiff’s attorneys). All this in addition to at least $6 million in legal bills paid to the white-shoe law firm of Byrne and Nixon, not to mention the in-house costs to the City Attorney’s office.

This entire horror story played-out in a series of closed-session meetings which denied the public its right to weigh in on the matter.

Would most Angelenos have wanted the City Council to comply with the original directive from HUD instead of fighting it in court? Would they have considered that the prudent and ethical thing to do? It’s not for us to say, but it wasn’t for the City Council to say either back in 2012. By going into closed-session and deciding what they thought was best for the public, the City Council cheated Angelenos.

What’s more, it wasn’t just one set of closed-session meetings by which the Council waged its legal war. As we will discuss in a future article, the Council used a series of underhanded tricks to conceal the huge amounts of money it was pouring into its legal battle. Instead of keeping all actions of the Council in the matter in one Council file, they dispersed it into at least five separate files—all under different names, making it virtually impossible for the public to know what was going on.

It’s time to put an end to closed-session meetings.