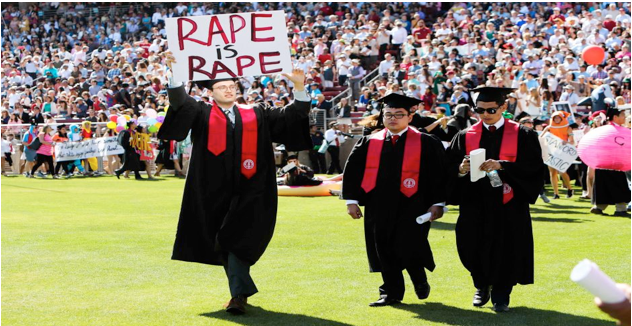 THIS IS WHAT I KNOW-First, an update on the Stanford rape case.

The six-month sentence of former Stanford athlete Brock Turner has elicited public outcry across the country, as well as a petition to recall the sentencing judge. Assembly Bill 2888 would close what prosecutors refer to as a loophole in California’s sex assault law. The bill cleared its first legislative hurdle on Tuesday. The sentencing loopholes currently paved the way for Turner to be eligible for a sentence that included probation in lieu of a time served in prison following his attack on an unconscious woman.

The bill’s author, Assemblyman Evan Low (D-Campbell), says, “Simply put, rape is rape. We believe there should be consistency in addressing this issue.” Alaleh Kianerci, the Santa Clara Deputy District Attorney who prosecuted Turner, addressed state senators at Tuesday’s hearing, stating that the trauma experienced by the victim, referred to as “Emily Doe,” was no less than any other rape victim. “We all need to protect the next Emily Doe,” stated Kianerci.

Under the new legislation, anyone convicted of eight specific sexual assault crimes, including crimes that involve alcohol or any other “intoxicating or anesthetic substance,” would no longer be eligible for parole. Several lawmakers see that bill as the best way to address the issue of punishment for sex crimes on college campuses. The bill’s co-author, Assemblyman Bill Dodd (D-Napa), adds, “It’s about changing a culture and preventing future crimes.”

Rehab Mogul Chris Bathum Arrested on Drug Charges--The founder/owner of Community Recovery Los Angeles, a chain of two dozen plus sober living and outpatient clinics, was arrested in Lost Hills Tuesday for the “transport (or) sale of a controlled substance,” per the LA County Sheriff’s Department. Chris Bathum was released on $30,000 bail at 4:40 am, less than two hours after booking.

The California Department of Health has also filed a complaint in LA County Superior Court against both Bathum and CRLA for operating “unlicensed alcoholism and drug-abuse recovery or treatment facilities in Los Angeles County.” The Department of Health has petitioned the court to close the entire operation. A May investigation of two CRLA facilities, including a Woodland Hills sober living facility called “House of Women” and a Melrose facility known as “The Melrose Project” concluded that both facilities had been “improperly providing residential alcoholism or drug-abuse recovery or treatment services without a license.”

Investigators found evidence of treatment centers at both the House of Women, which had a room labeled “Room Detox,” as well as a medication room, and at the Melrose Project, which former clients and staff confirmed was a treatment center. In August, the department had sent written orders to both facilities to cease all illegal activities and by September, Community Recovery CEO Kirsten Wallace responded in writing that, “The practices you demand us to cease and desist have ceased and desisted.”

In May, the department returned to investigate and found that CRLA is “still providing services without a license, despite CRLA’s written statement of correction. In fact, the department interviewed staff and clients who confirmed that ongoing services were being provided at the facilities.” The Department of Health seeks a permanent injunction against Bathum and anyone acting “in concert with him” from “operating any unlicensed alcoholism and drug-abuse recovery or treatment facilities or in any way facilitating such operations,” per the department’s complaint.

This is hardly Bathum’s first dance with law enforcement. The “rehab mogul” has faced accusations of drug use, insurance fraud and sexual battery, all of which he has denied.

While sober living facilities may serve a purpose in assisting addicts on the road to sobriety, the unscrupulous must be prevented from taking advantage of the most vulnerable. Bathum’s arrest and the petition to close his facilities are the first steps in curbing the illegal and unethical manner in which he has engaged with those struggling with addiction. Hopefully, the state will clamp down on similar unethical operators through increased oversight and legislation.