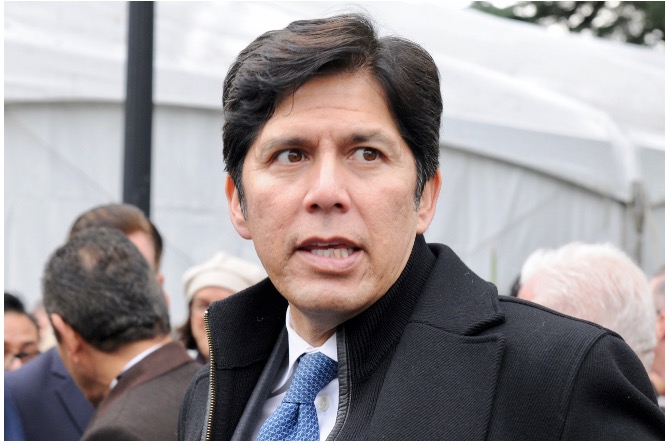 THE EASTSIDER - Special thanks to the Eagle Rock Chamber of Commerce, for agreeing to sit down with me on Sunday. The tale of this year’s Christmas Tree Lightning Event at the Eagle Rock City Hall follows.

For decades (like before even Antonio Villaraigosa) the Chamber of Commerce has put on a Xmas Tree Lighting Event, as a fun opportunity for the kids to participate in a free and pretty occasion. It’s been a great success and a very nice thank you to the Eagle Rock community.

That is, until Kevin the Great, aka Kevin DeLeon, came along.  By last year, he decided that it was his event, and didn’t even bother with the Eagle Rock Chamber of Commerce. No sir.  By the time this year’s event came along last week, Kevin was missing in action, stripped of all his Committee Assignments, and basically hiding out in a cave someplace, hoping that his part in the leaked audio discussion at the County Federation of Labor would blow over.

In the meantime, with nothing else to do except draw a paycheck, his CD 14 staff was taking some serious heat.  I heard about threats to some of the staff.  Anyway, trying to take some of the heat off, Sarah Flaherty, Kevin’s Field Deputy, contacted the Chamber of Commerce about their putting on the 2022 Christmas Tree Lighting event with a very low-key profile by Kevin.

By late November, the Chamber was evidently ok with taking the lead in the event so the kids could have a nice night out, but there were some caveats.  Like making it clear that this would be a Chamber of Commerce event, and the only thing they wanted from CD 14 was the use of the CD 14 Logo.  And no liability, being a nonprofit without the deep pockets and lawyers available to the Council District.

Thus, no fake snow, because it would be too easy for someone to slip and have an accident during the event.

A few days before the Christmas Tree Lighting was to take place, the Eagle Rock Women’s 20th Century Club had scheduled their annual event, which featured showing the film “It’s a Wonderful Life”. This year, it obviously was going to be on their own, without Kevin De Leon.  So they sent out their promotional material  and got ready for an Eagle Rock celebration.

However, two days prior to the event, the Missing in Action Mr. De Leon suddenly sent out a flyer with no notice to the Women’s Club and social media that their event was in fact a Kevin De Leon event.

The event was canceled by the Women’s Club, who realized that De Leon only cares about one person - Kevin De Leon.  The community be dammed.

Regarding the upcoming Christmas Tree Lighting event, the hosts had done outreach to  groups who are picketing every Kevin De Leon event, having obtained assurance from the CD 14 staff that Kevin himself would have no part in the event, period.

Well, sure enough, even as the event day drew near, Kevin De Leon mailed out a flyer to folks in Eagle Rock and Highland Park, taking credit for the event, while not saying anything about his personal own self showing up.

As is evidently the new approach of CD 14, there were no CD 14 Seals, but the CD 14 staff had made sure there was plenty of fake snow, even as there was no indication that CD 14 would take the hit if someone  had an accident. By this act, we know for a fact that the CD 14 staff are hypocritical liars, who changed their ‘agreement’ with the Eagle Rock Chamber of Commerce.

The Chamber had to notify protesters that now CD 14 was taking charge.  So at a nice event for children, the protesters were loud and proud to be there.

Groovy. And in a typical example of hubris, guess who showed up while everyone was waiting for Santa Claus?  You got it - Kevin De Leon, live and in person.  Of course, being the big man that he is, De Leon brought with him what appeared to be private security, who had to be paid by someone.  I’m guessing that that means you and I will foot the bill, even though he’s in hiding from a Recall Petition which has now been published.

Let’s face it.  Kevin De Leon has been effectively banished from the LA City Council, stripped of all his committees and asked to resign. So how is he still able to have events and hand out goodies?

According to insiders, he is using the CD 14 discretionary funds to do so.  You would think that he and his staff would get their paychecks, period.  Clearly the President of the City Council, Paul Krekorian, should look into this.

In the meantime, I have put in a Public Records Request for a copy of the current CD 14 budget, including any discretionary funds. According to a recent article in Circlingthenews:

Each councilmember receives a pot of money that he/she can use for special projects in his/her district, and at his/her discretion.

The money comes from oil pipeline franchise fees, real property trust funds revenues and street furniture revenues. A fourth source is officeholder accounts, and each councilmember can raise up to $107,000 each year.

This initially came to light in June because it was suggested that since there wasn’t funding for police for the Pacific Palisades beach detail, Bonin could use some of his funding to help cover those costs.

Bonin’s office responded for a June 21 story (https://www.circlingthenews.com/discretionary-funding-transparency-sought-bonin-uses-his-for-homeless/), “The budget for the Los Angeles Police Department is at a record high, dwarfing expenditures for everything else in the city. For the remainder of Councilmember Bonin’s time in office, he is focusing use of his discretionary dollars on efforts to address the homelessness crisis and on strategies to prevent homelessness. He is funding shared housing programs and organizations doing outreach and providing casework to unhoused individuals, and he is providing money to groups working to prevent homelessness and support people at risk of homelessness, such as tenants, foster youth, and survivors of domestic violence.”

CTN reached out to Erin Darling and Tracy Parks, who are running for his seat in November, and asked how they would spend discretionary funds.

When and if I get the documents, I would be happy to share them with everyone who has an interest.

Wanting to know exactly who the current staff are for CD 14, I went to the website for this article.  Behold!  You can’t get any information about Kevin’s staff, because all their contact information has disappeared from the CD 14 Website!  Just like their boss.

I immediately filed a Public Records Act with the City Clerk, under the theory that if his staff are being paid, we are entitled to know who the hell they are and what their contact information is. Right now all you can get is the telephone numbers and address of the CD 14 offices. I’m still waiting for a response.

So here we have a sitting Councilmember who has been shunned by the entire LA City Council and asked to resign,  wandering around in different houses so he can’t be held accountable for his deeds, and with a staff that are hiding their own names even as they continue to be paid by us.

Anecdotal information is that Kevin actually thinks that he can weather this storm, and all will be well over time. All I can say is that is the belief of a truly narcissistic personality.

So the sooner we can get rid of him the better for CD 14, and all Angelenos.  Our job is to get this elected official recalled from office. Let’s get together, get the petitions out and signed, and end an unpleasant  chapter in the history of  Los Angeles.

Today the City Clerk approved the Circulation of the Recall Petition.  Soon there should be copies available for people to actually sign!  Here’s their statement: