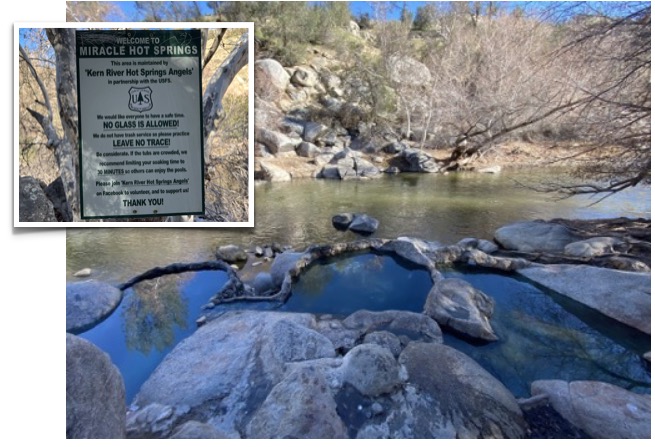 but a group of Forest Service officers used it as an excuse to jackhammer the rock-and-mortar pools and soaking tubs at Miracle Hot Springs into rubble a few days later.

In doing so, in claiming the tubs presented an imminent danger to the public, these officers used their sense of entitlement to deprive thousands of people of pleasure in natural surroundings without due process.

Was this death a murder calling for decisive retribution? No.

The murder here was the destruction of the stone and mortar hot tubs created and curated by those who had come to love their natural beauty.

Give a man a gun and it overinflates his ego.

We need people to ensure safety for the public but too often law enforcement attracts those who crave power due to their own insecurities, and in not believing in themselves think the worst of others.

And it is far easier to express one’s inner rage by beating up the homeless, shooting people of color, and destroying inanimate objects.

In this case, in an area rife with meth-heads and other infringers of law-and-order who are hard to police, it may have relieved stress symbolically by taking out something that gives some someone who may have lived on the fringe of society a bit of pleasure.

But he and his friends are a small minority of those who built, maintain and use the pools. And yes, there are others who like to party and are guilty of bringing in (and breaking) glass.

And there are far more people from Lake Isabella, the surrounding area and as far away as San Francisco and Los Angeles, indeed from all over the world, who regularly make trips to the hot springs to enjoy sitting quietly with friends listening to the rapids in the river below and packing out not only what they brought but picking up the detritus of those less consideration along the way.

If E. coli or other contaminants test high, recreation areas are temporarily closed and their amenities are not destroyed.

As has been demonstrated time and again in American cities, the time has come to hold over-aggressive law enforcement agents accountable to those that they are supposed to serve.

Perhaps there was E. coli present at the springs but surely the levels would have come down over the next couple of days. Perhaps some people behave badly at times but that is no reason to punish thousands for the actions of a few.

Miracle Hot Springs is a U.S. Forest Service-managed day-use area on the east shore of the Kern River near Lake Isabella, where steaming hot natural mineral water bubbles from cracks in the earth has been a piece of paradise for many over the decades.

The Forest Service, the Kern River Conservancy, and a volunteer group self-titled the Hot Springs Angels have jointly managed the Miracle Hot Springs for many years. This group power-wash the tubs and help clean up trash, abate graffiti, and educate visitors on the National Park Service principles of “leave no trace.”

While they can educate, they cannot enforce. Under an agreement signed annually with the Forest Service, the Angels adhere to guidelines for volunteer organization engaged in activities on sensitive Sequoia National Forest land. Part of this understanding was that local law enforcement engage with them and the community prior to taking any action.

Without any discussion with those who loved the pools and the serenity of the area, certain rangers made an arbitrary determination that there were some unsafe aspects of the hot springs and demolished the pools. Now all that is left is smashed rocks, a scar on the property those rangers are paid to protect.

Perhaps people can understand the views of Forest Service personnel tasked with maintaining the area in pristine condition, and that individual officers can feel threatened by those who flout the rules and that, in the wake of the pandemic and a time of increasing selfishness, more and more people lack any sense of boundaries or appropriateness in their behavior. 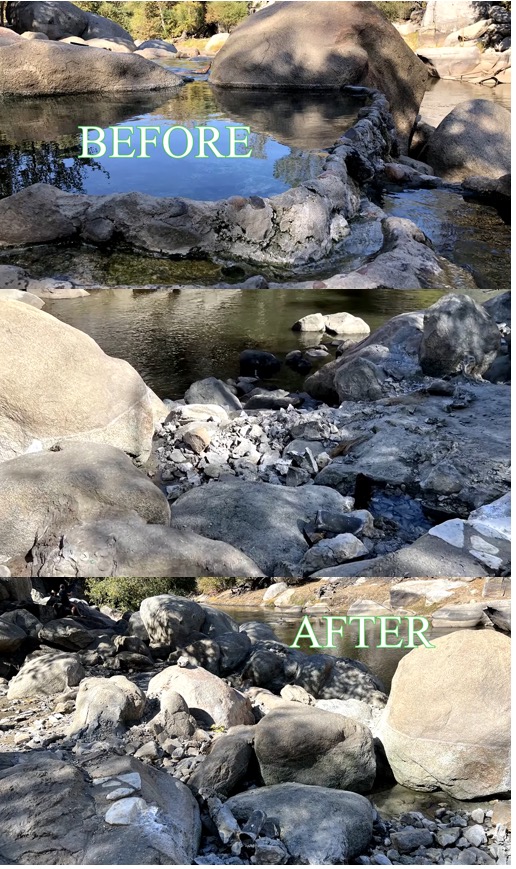 Certainly the men who destroyed the pools felt the need to control a situation that felt dangerous – there had been budget cuts at a time when crime was rising, more people were coming to the hot springs during the pandemic, the pools had been vandalized by persons unknown in March of 2021, and three people had died in 2022 up from an average of one in previous years – but why take it upon themselves to tear down the pools at the same time as another Ranger was telling people that the area would only be closed for a few days?

Why not talk to all the parties, address the issues and how to confront them, and avoid actions that may lead to more and deadlier confrontations?

What’s important in all this is that lots of people enjoyed the place and held, if anything, more respect for the springs and the forest in which they bubbled up, and for others.

Although not, in this case, for the vandalizing officers.

Can the situation be improved? We hope so.

You can't legislate stupidity – either by partying lawbreakers or by property wreckers wearing uniforms.

But at noon on December 3rd, the Forest Service is reaching out and inviting all interested parties to a public meeting at the Miracle Hot Springs Picnic Area to discuss the future of the area. This will be an opportunity for everyone to share information about challenges to users, volunteers, and the Forest Service.

And, hopefully, come up with solutions for the reconstruction of the tubs which will allow those who love the springs to continue to make their pilgrimages to the healing waters.

Article on the magic and history of Miracle Hot Springs and the reduction of the pools to rubble.

(Liz Amsden is a contributor to CityWatch and an activist from Northeast Los Angeles with opinions on much of what goes on in our lives. She has written extensively on the City's budget and services as well as her many other interests and passions.  In her real life she works on budgets for film and television where fiction can rarely be as strange as the truth of living in today's world.)