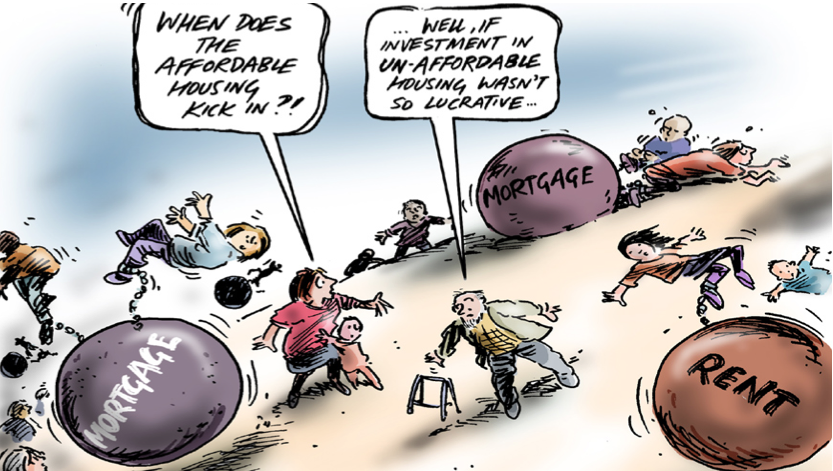 EXPLAINING THE DENSITY PROGRAM-In 2005 the California State Legislature passed SB 1818 which requires local governments to offer density bonuses for developers in exchange for their setting aside a percentage of the units they construct for very low, low or moderate-income housing.

The density bonus program has been popular with developers. Between early 2008 and September 2017, the City approved a total of 641 developments utilizing the density bonuses and incentives. During that period a total of 34,911 market rate and 10,064 low and moderate-income and senior units were approved to be built by the 641 projects. The 10,064 affordable units are distributed among the following income levels:

The maximum incomes and rent levels permitted for the four income categories for a household with four persons are:

Affordable housing activists raised serious concerns about the SB 1818 density bonus program. They argued that almost as many existing older, affordable units would be demolished to make way for the affordable units constructed in the new projects. The following are demolition figures for the numbers of dwelling units as well as the numbers of properties involving non-residential land uses that were demolished:

The figures show that 2,451 multifamily dwelling units, most of them affordable, were demolished to make way for the SB 1818 projects. This is substantially less than the 10,064 affordable units that were approved to be built in the new projects, resulting in a net increase of about 7,613 affordable units, assuming the units are charging affordable rents and only qualified renters are living in the affordable units. But, since there is no on-site verification of tenants or rents, there is no way to confirm that the actual supplyof affordable housing units has increased. In addition, 219 single-family homes were demolished for the SB 1818 projects, a much smaller number compared to the figures for multifamily units.

The total figure for the non-residential and vacant properties is 346 -- 53% or slightly over half of the properties redeveloped with SB 1818 projects. The non-residential properties have made a potentially major contribution to the production of affordable units in Los Angeles, pending on-site inspections.

The net increase of about 7,613 approved affordable units from January 2008 to September 2017 constitutes 16.3% of the 46,590 low and moderate-income units that need to be built in Los Angeles from 2014 to 2021, as determined by the Southern California Association of Governments’ Regional Housing Needs Allocation Assessment.

While the SB 1818 program has made a potentially significant impact on providing low and moderate-income housing, it is, by itself, insufficient. In addition to inspections of the SB 1818 affordable units, greater government spending on affordable housing and public housing is needed. However, starting with the Reagan administration in the early 1980s, Federal spending on public housing has been severely reduced, with state and local governments unable to make up the difference.

In 2011, at the behest of Governor Brown, the State Legislature abolished Community Redevelopment agencies whose tax increment financing was a major source of funds for low and moderate-income housing. Faced with an ever-increasing demand for affordable housing and the insufficient production of such housing, our housing affordability crisis, along with increasing homelessness, are likely to continue into the foreseeable future.

(John Issakson is an observer and commentator on the urban scene in Los Angeles.) Edited for CityWatch by Linda Abrams.